If there’s something I’ve learnt after years and years of collecting Transformers, it’s that vintage is overrated. I love my original items, both Lego and Transformers, but that’s because I know that I’ve owned them for thirty-some years. The wear and tear is there because I put it there. I used to buy collections of loose figures, but quickly realized that the grime and dust is much less attractive when it’s not mine.

Which brings me to the Galaxy Explorer, the first major spaceship in the classic space theme, released in 1979. Tracking down one of these isn’t that hard – it sold well and probably had a special status to many a kid, so the supply isn’t that bad. You can get one in decent condition for around 200 dollars, which is reasonable considering its age. However, that gives you all that grime and all those scratches. You can get an original unopened one right now, but in that case, say bye-bye to 2500 dollars, and I’d think opening it would be a crime against humanity. 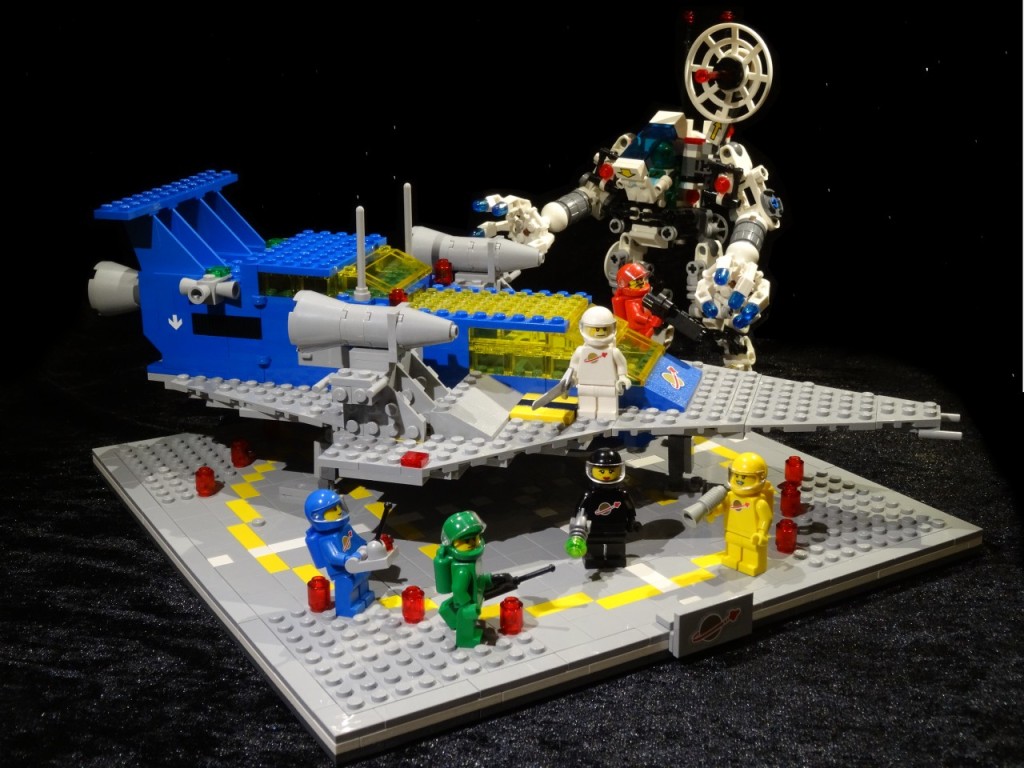 So that leaves making a new one. As usual, Lego is Lego. The only problem in this case is that many of the parts don’t exist in current colour schemes. The old gray doesn’t exist anymore, and making a mix would look horrible, so it has to be new light bluish gray. Then there’s the blue, which is obviously still around but some of the parts aren’t. And for the transparent yellow which was so prevalent in Classic Space, well, there’s no substitute for that, although a few parts can be replaced with cheaper modern alternatives. 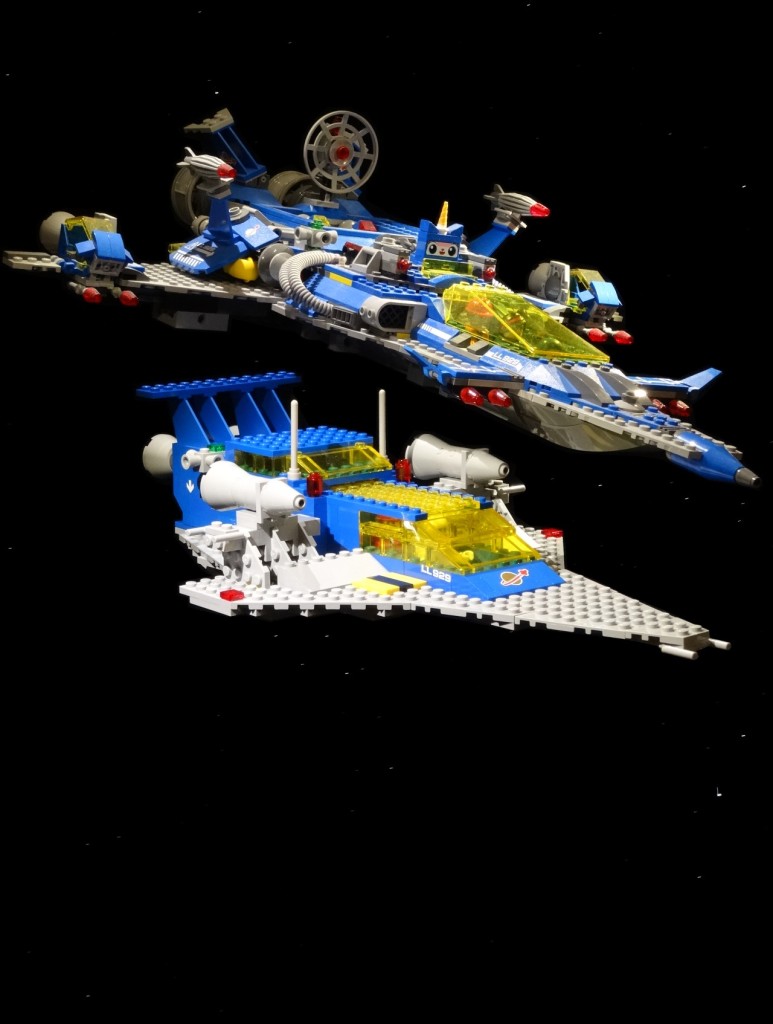 The sleek edges of the ship are iconic, so I couldn’t stray too far from the design. In place of the 8 studs and 4 studs long wing parts, I used 6 studs wings and bigger 8×8 corner plates. The gray supports for the side engines had to replaced with a SNOT construct mounted on the wings. The transparent sides are now a combination of 1×2 bricks and 1×4 panels. The iconic logos are stickers from the newer Benny’s Spaceship, Spaceship, Spaceship!. The front one is mounted on a 3×4 slope. Also, the engines now attach to technic bars inserted in the walls, and the fins are a new, slightly higher design.

The underside is also slightly lowered using undercarriage parts, which makes for a bit more room in the cockpit, which now has chairs. Instead of the old landing gear arrangement, I made some fragile but sleek folding feet. And improved landing gear also requires an improved landing site, which is now brickbuilt, both because I didn’t have the original baseplate and because it wouldn’t match the colour. 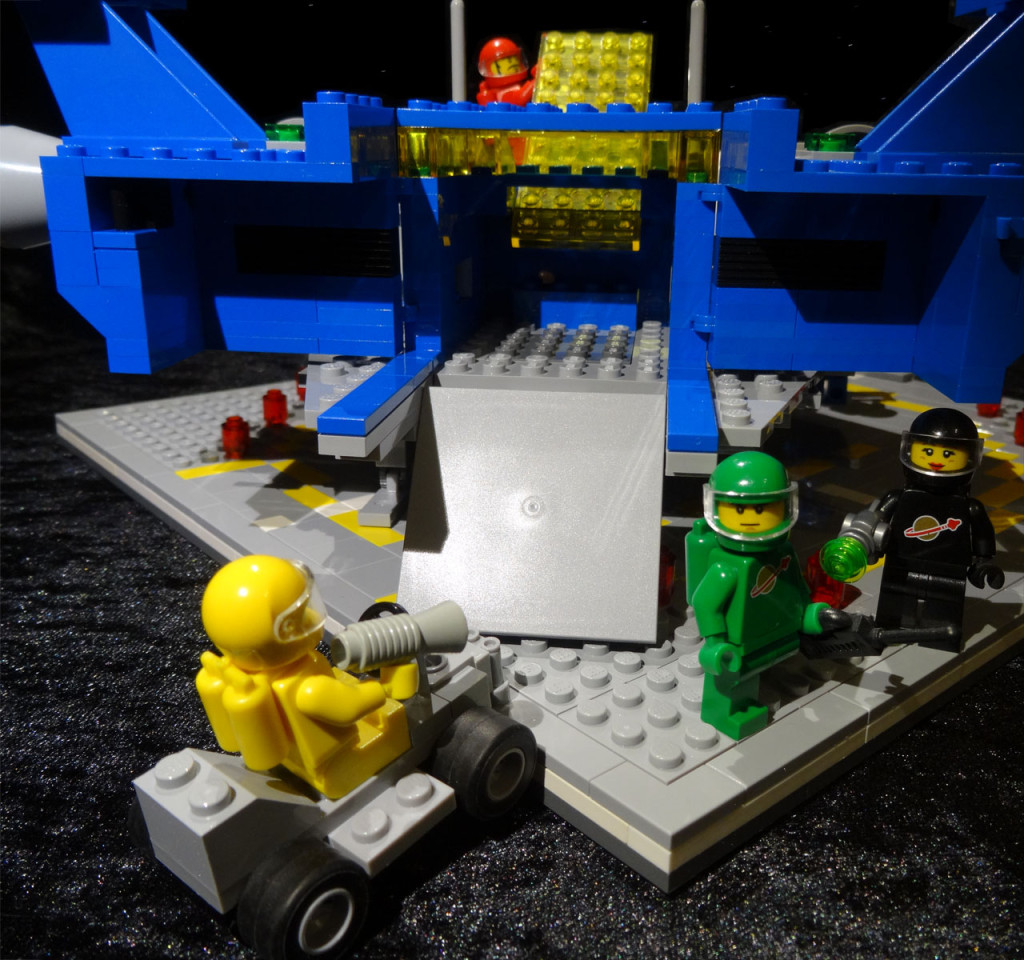 The back section still opens, with a few changes. The hinges were replaced with new, thinner ones. The hinge for the ramp (which is a tile instead of a plate) is also new. Then instead of a simple tile holding the doors shut, I included a small locking pin like in many official builds. The little rover is mostly unchanged apart from a new take on the front.

Aside from the few original parts and the minifigures, which are terribly expensive in good condition, this was a rather cheap build. Most of it is common parts that I already had, and it still shouldn’t be too hard to track down the sticker sheet. I also had four of the minifigures already which made it much more reasonable. All in all, it just took about ten days from conception to the finished ship, after a few quick Bricklink orders and an enjoyable build. I definitely recommend going this route if you want a Galaxy Explorer of your own. 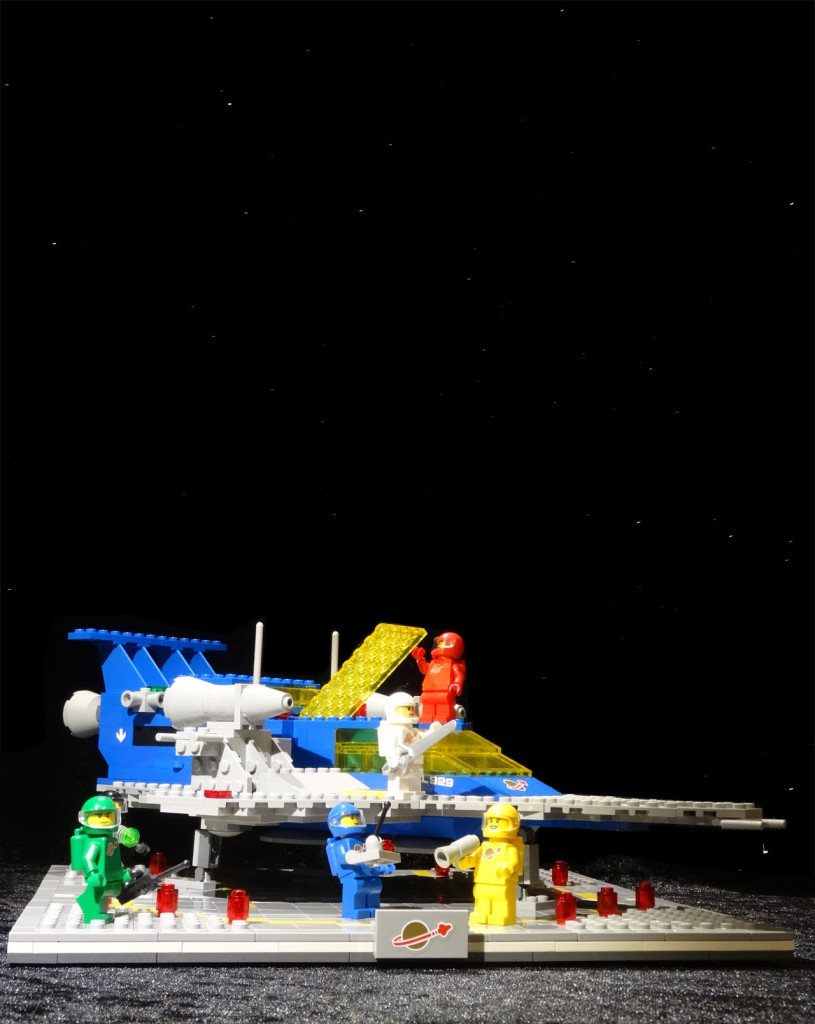