After a huge hotel breakfast (one of the reasons to stay in a hotel to begin with), Auto Assembly Europe 2011 went on. The day started with another quiz, this time with random, stupidly hard Transformers facts. I consider myself fairly knowledgeable but I could answer maybe 1/10 of them.

After that, there was another charity auction, this time with more interesting stuff. There were some figures but mostly a bunch of signed cards of voice actors and Rosie whatshername from the last movie, in an appropriate lack of dress. Some went rather low but a few invited bidding wars, mostly from the auctioneer himself who paid a rather stunning 1500 SEK for a Frank Welker autograph (the voice of Megatron and Soundwave). Since I’m happily unaware of most of the actors, I could resist paying here.

I did bid on an Energon Unicron which I eventually won at the top of what I was prepared to pay. I also considered bidding on a Mixcoatl, the exclusive Headmaster toy from last year, but it went too high. However, after having all the stuff I brought sold to others, I felt rather generous and went and bought a second United figure, this time Wreck-Gar. Even though I already have him in another version, he’s made to ride himself in motorcycle mode so having two is not a problem.

After that was another presentation by Simon Furman, this time on the process of creating a comic, from the early outline to script, to sketches, to inked pages, to edited dialogue and to the final page. There was some nice art by Ej Su, Nick Roche and Don Figueroa and some cool looks into the unpublished Age of Wrath and Energon comics that went down with Dreamwave.

Before lunch I had an interview with Simon, which I’ll be publishing in a bit, as an introduction for those of you who don’t know who he is and with some interesting pieces of info on the upcoming series. I also got him to sign my copy of #80, the last of the original comic book run, and bought some scripts.

After lunch (a rather average Angus at Burger King, didn’t see what the fuss was all about) there was another stupendously hard competition, this time about Transformers music. There were a few themes I recognized but mostly not. I also learned that the Japanese shows have ridiculous music most of the time.

As the day drew to an end, it was time for the art competitions, for paintings and for models. Having brought my giant Smokescreen I was fairly confident to win and luckily people recognized the work I’ve put into it. I won first price which was rather nice. Like all the competitions, Hasbro Nordic had sponsored us with a ton of prices so I got a Voyager helicopter I forgot the name of, and the huge Ultimate Optimus Prime (also known as Fairy Queen Optimus Prime). A neat thing, in his truck form, which I never would have bought so that was cool. 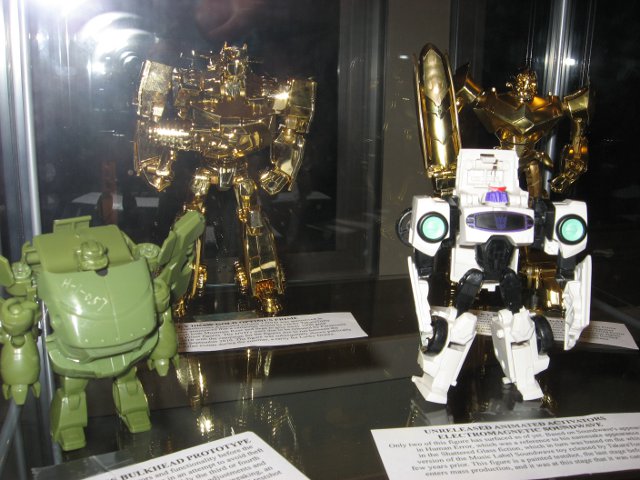 There was a display of all (?) the exclusive Transformers Animated figures, including the Stunticon set, some more Botcon figures, Japanese exclusives and these rather rare ones. The golden Lucky Draw copies of Optimus Prime and Megatron are probably expensive enough, but the unreleased Activators Bulkhead and white Soundwave are more or less unique.

At the end of the convention the hosts thanked us all for coming, and things were calming down. I resisted buying any more stuff, already having problems fitting everything in my bags. Well, one little thing that I intend to give away somehow. I sat down to take Smokescreen apart for safe passage home and said goodbye.

Then it was time for dinner, and I went back to Lucullus with my fighting game friend Erik. We had a great meal there (I love Greek food) and then went over to his place for a few rounds of Darkstalkers – a game that I actually have a chance at winning in.

Overall I’ve had a great time, got some cool stuff and watched more Generation 1 cartoons than I really wanted. The only thing I would have wanted is more import stuff to buy but that couldn’t be helped. I’m also fairly happy I didn’t buy anything I didn’t really want. Overall, I went way below budget thanks to the sold stuff so I may actually get to eat for the rest of the month.

If nothing else, those acidic blue cakes. More on them later…