Babylon 5 at Twenty – A Visual Celebration

Celebrating twenty years after the start of the show, the book Babylon 5 At Twenty (B5-20) has just been released in its second printing. It’s available for order at B5books.com and at $88, which is a ”pre-order price” even though it’s already shipping, it’s a pretty hefty investment. Is it worth it?

It sure is a good production. The book comes snugly in an outer casing and the cover itself is a nice, somber black. You kind of expect a book like this to have a gaudy printed glossy cover that will tear around the edges, but I’m not complaining. 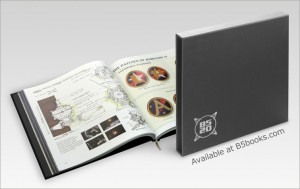 B520 is mostly a collection of behind the scenes material. The thing is, Babylon 5 was never supposed to have much of that. There was no DVD extras crew hanging around to produce documentaries and capture everything. It has to be noted that when this show started production, the world wide web itself was in its infancy and the DVD format not yet available, so the idea of spending time and money on documentation was quite foreign. Not to mention that it was a very low budget show, doing the best they could thanks to dedicated designers and cast.

I get the feeling that this book was put together with whatever they could find. It’s a varied but disjointed look at the production. There are plenty of stage photos, showing off tiny details in the observation dome or the Zocalo, but also unneeded focus on sets only used once like Garibaldi’s bathroom. Some of the main characters get decent coverage, but many just have a few stills from the show. Generally, the photos are quick snaps rather than professional studio shots, with plenty of flash glare and red eyes (and not just on G’Kar). This is nothing like the encyclopedic Star Wars books.

However, there are still plenty of goodies. There are interesting notes on storylines and characters, some cool size charts comparing the ships, design sketches for many of the CGI environments or creatures, and an indepth look at the embroidered patches used for various uniforms. There are also various glimpses into the production with production crew milling about, setting up shots and a lovely group picture that shows many of the minor cast like Wayne Alexander (who was most of the time dressed as various aliens) out of costume. There is also plenty of stuff from the pilot episode, the movies and the illfated followups, Crusader and Legend of the Rangers.

This book is not a complete resource on Babylon 5 in any way. I would have liked to see more text and less of the huge photos of (relatively) uninteresting backdrops, and maybe less of the spinoffs overall. I’m pretty sure that the audience for this book is limited which in turn explains the high price. Because of the age of the show, it’s hard to find pictures at all, especially stuff like this. A casual fan has no need of this book. If you’re a dedicated fan with 90 dollars to spare, sure, go ahead. It’s not like there’s much choice.

Ett svar till Babylon 5 at Twenty – A Visual Celebration