Dark Souls can be a terrifying place to be. Slightly less so when you have someone to guide you along, and even less so when it’s someone sitting right next to you. In an attempt to finally get somewhere in this game, I set up two tv:s (my old one along with the 47″ LG 3D) and two Playstation 3:s, and invited a friend who has finished the game a few times already.

For this to work, we needed two characters at roughly the same level so we simply started from scratch. This time I went for a cleric, intending to play a support role with healing and ranged attacks. Well, obviously there are plenty of places where I need to fend for myself. In some cases you simply can’t summon help and some places it’s not worth the hassle, since Dark Souls isn’t intended to be co-oped.

The idea is that the summon signs that you place appear in a random ”server”, so you just go somewhere off the beaten path with both characters and then keep placing the summon stone until the other player sees it. Sometimes it takes just a few tries, sometimes it takes ages. But having a reliable player you can talk to and coordinate with is a huge help. Along with extra help like Solaire, we’ve cut through most bosses very easily.

Not only do we take them down rather easily, we also get 150% souls from them since we get both our own and then an extra 50% for helping out. Sunlight Medals are also doubled. Very handy.

This turns Dark Souls into something not quite as demoralizing and sometimes actually rather light-hearted. At least until the partner drops down Blighttown and suddenly you’re all alone on those ledges… 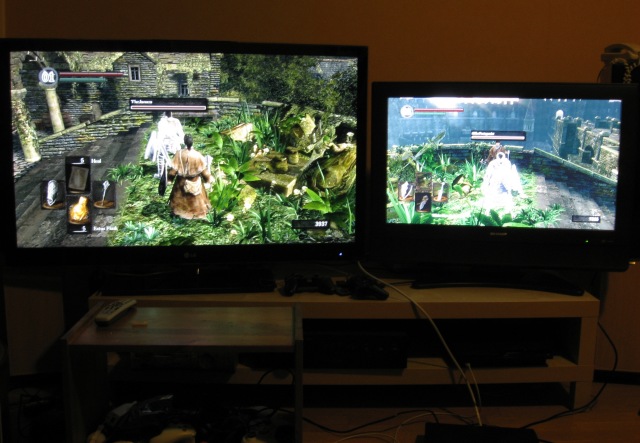