Unlike my two most recent modulars, which were pieced together since the original releases are stupidly expensive, Pet Shop was bought directly from Lego Shop@Home. Being a set from 2011 it’s still available to buy, but it seems to slowly go out of stock. However, I noticed during the build that mine is a revised version with some changed parts, so there’s clearly separate production runs. Pet Shop is notable in that it consists of two separate buildings. Market Street also separates in two but one is just the covered street section. Let’s have a look at them. 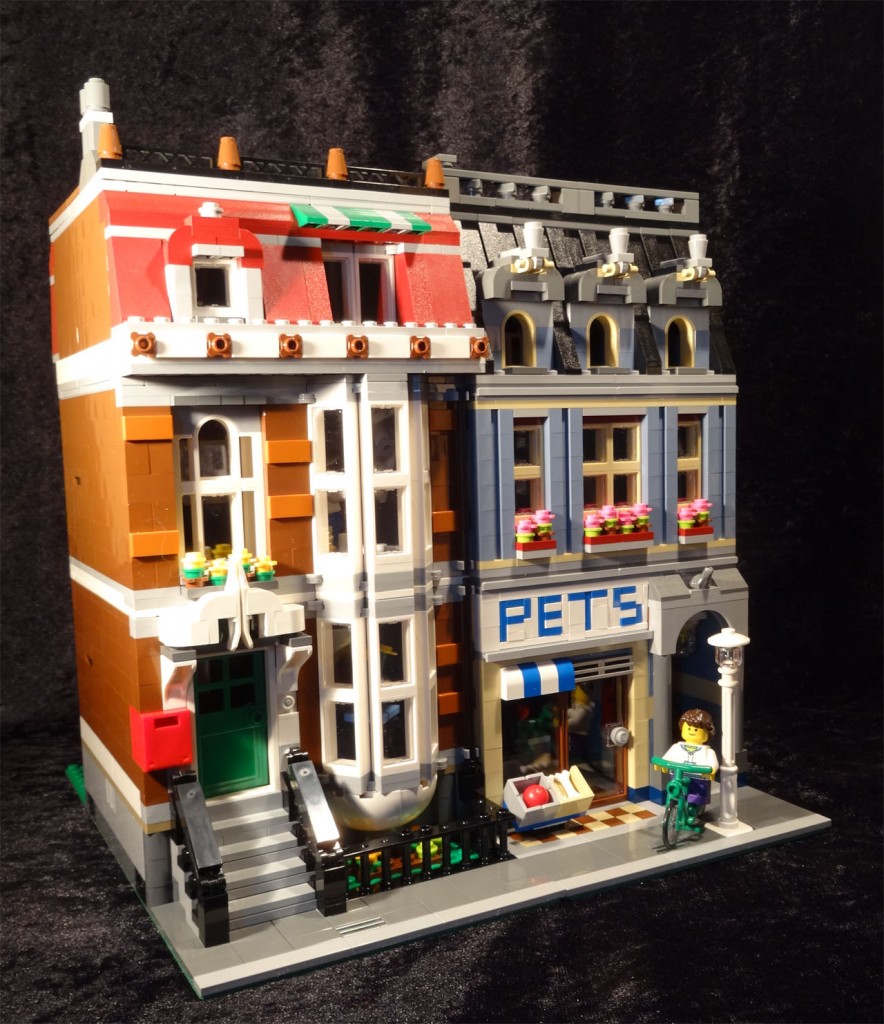 The town house is a very typical New York or British design, with stairs leading up to the front door and an extended window section. Inside there is a furnished livingroom with plenty of fancy details, including a telephone (and I realized when building that eventually kids won’t even recognize what it is), a sofa and a small toilet stashed away under the spiral stairs. This is probably my favourite part of the entire set. There are plenty of clever build techniques but I loved how the bottom of the windows are done. To achieve the rounded effects, two quarter domes are put into place upside down, and then secured in place by a table. The stair technique from Market Street returns. I also like how the mount for the hat rack forms the doorbell outside. And of course, the skis used for decoration over the front door are very clever. 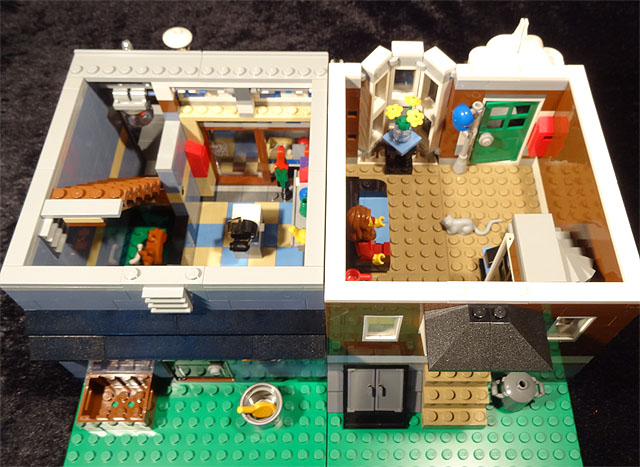 In contrast the second floor is mostly empty. The excuse is that it’s being redecorated, and the paint tools look rather good. However, while extremely clever there really isn’t a point to the swathe of paint on the wall – it requires you to fix the painter in place there to make any sense. The top floor also isn’t much to talk about, although the nice vegetable garden and the mosaic windows add some nice details. Still, overall it’s a gorgerous building with plenty of interesting techniques used. The colours aren’t too rare so it could rather easily be replicated to make an entire block of these apartments.

The pet shop is the more complex build. The floor inside is tiled and looks suitably cheery, with a cool looking fish tank (with one mighty big goldfish), pens for a kitten and a dog, and a few more animals. The stairs fold away to access the dog pen more easily. Upstairs, you get a nice little modern apartment with a fireplace and a cooking area, as well as a small table. I love how the staircase wall looks, in a separate colour from the rest of the interior. And once you go up the stairs, you end up in a cozy sleeping loft overlooking the rest of the apartment. 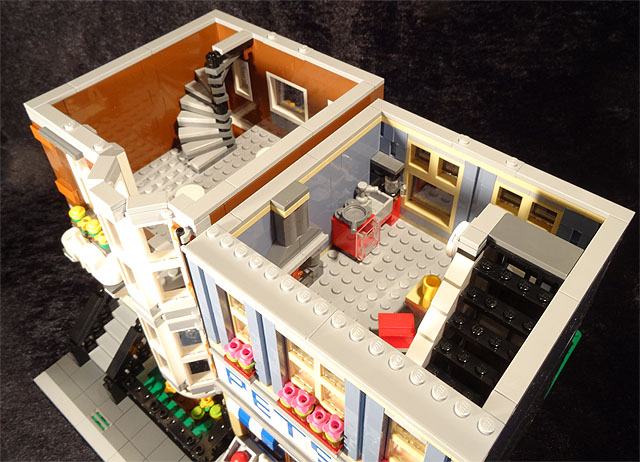 Unfortunately, most of this is locked away inside once you put the house together. It’s not as open and friendly as Parisian Restaurant or Green Grocer since there are no balconies and no open areas on the back. However, it’s still a great looking building with the offset roof tiles, the large windows with flowers and of course the wonderously simple PETS sign. 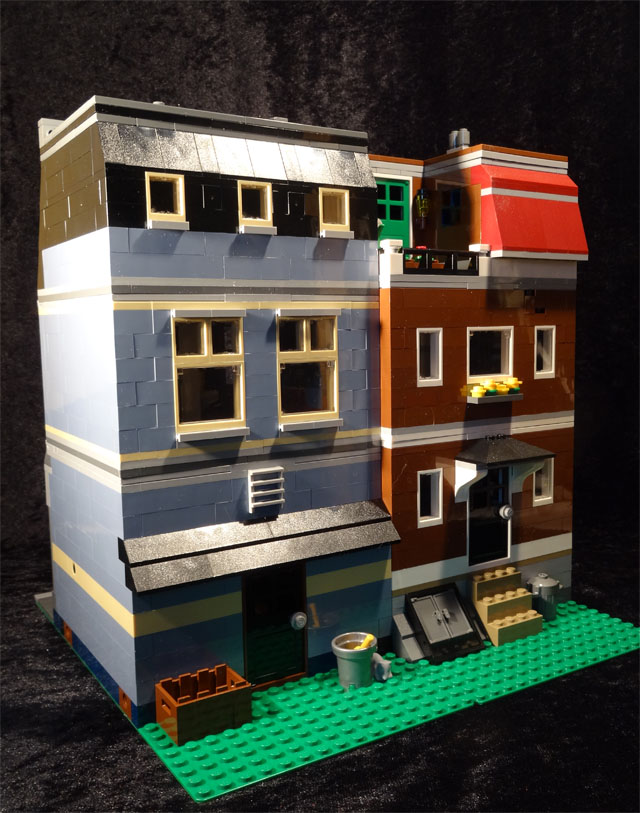 Overall I like the understated look. You could very easily buy two of these and just rebuild the shop into something else, or switch out the wall colours. It’s interesting to note the choices of pieces. In the brown building, there are plenty of 1×8 bricks, while the blue part exclusively uses double 1x4s. It will probably make this easier to complete once it’s out of stock, although the masses of sand blue could be hard to track down eventually. Since it’s still in production, I’d suggest that you get this as soon as possible.

In my first post-Dark Ages year I got two modulars. In the second I’ve gotten four already and it’s only April. Yeesh. However, this is as far as I go. There simply aren’t any more I can get. Mostly because of space – I can’t fit the huge towers of Café Corner, Town Hall or Palace Cinema in my shelves. Out of the six I have, Pet Shop comes in at a solid third place. Green Grocer and Parisian Restaurant are simply better looking, with even cooler design features. After that, Fire Brigade is a great one to get (and it has been discontinued so there’s no time to lose!). Grand Emporium looks great but it was a very boring build. And finally Market Street, which is a kind of proto-modular and not too interesting to look at or build. 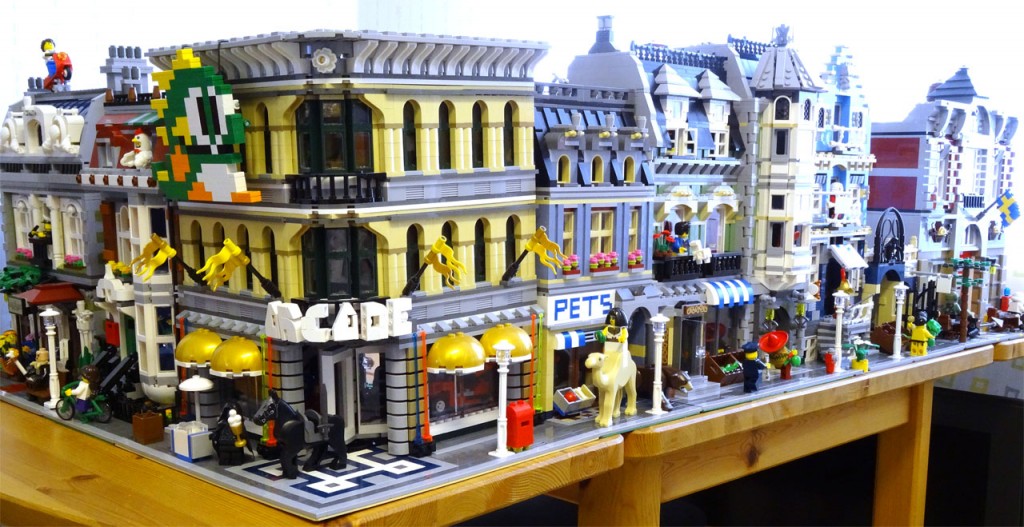