With it being December 1st and all, I decided it was time to open up a rather special set. Every year, Lego makes a very special set that is only available to employees, and since 2018 was the 40th anniversary of the minifigure, they created a rather cool set. Obviously, I’m not an employee but surprisingly the set was relatively affordable second-hand, at least earlier this year.

The set comes in a pretty big box, with instructions that the finished model can be neatly stored in the box and, Lego hopes, become a part of the Christmas tradition. Eight bags and four instruction books build the components: the Santa oversized minifigure, the sled, the box with presents, and finally the reindeer. Everything is scaled closely to 3:1, with Santa being the exact same size as the Giant-Man buildable figure. 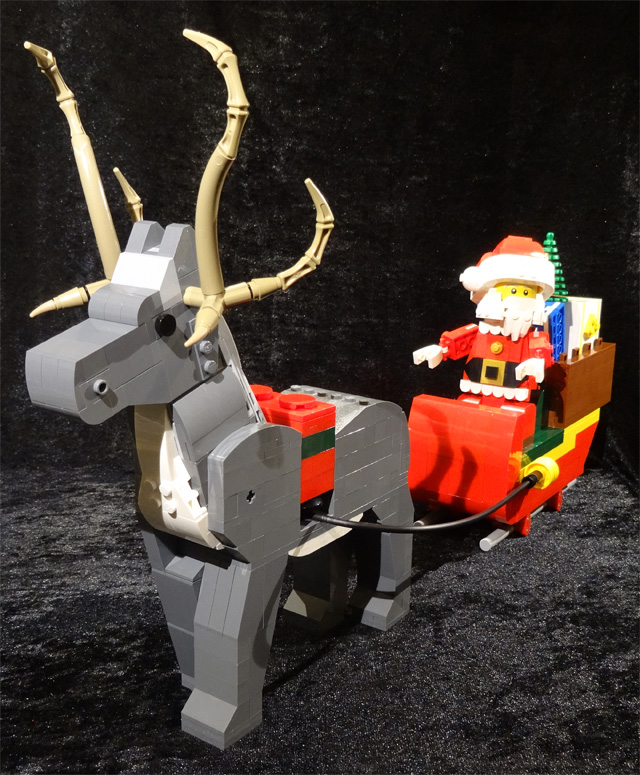 Santa himself is quite posable, with arms on ball joints and his hands on hinges but otherwise having the same range of motion as a regular minifigure. He has decent detail and obviously an exclusive printed face. I was also surprised to see an unprinted Cars windscreen used twice for his hat – this part otherwise only appears unprinted in the junior A-Wing.

The sled is huge and quite solid, but despite the seemingly simple design there’s some finesse involved in building it. The entire thing is 9 studs wide too. The dark green seat for Santa is nice and uses some rare parts.

The box is an brick-built oversized standard Lego part that ends up sitting neatly on the sled and has space for three presents (and a loose tree precariously stacked on top). The presents hinge open to reveal the actual reason I bought this set: three reissued classic figures. The Blacktron figure from 1987 is obviously the main attraction here, with the simple but effective print and the all-black layout that makes it one of the most loved minifigures ever. The pirate is a little more generic, but the first Pirates line from 1989 was very dear to me and it’s nice to have one brand new. Finally, there’s a female doctor with a design used from 1986-1988. Her hair was the default female hair for much of the 80′s and 90′s, but it’s rarely used since so it’s nice to see it again. 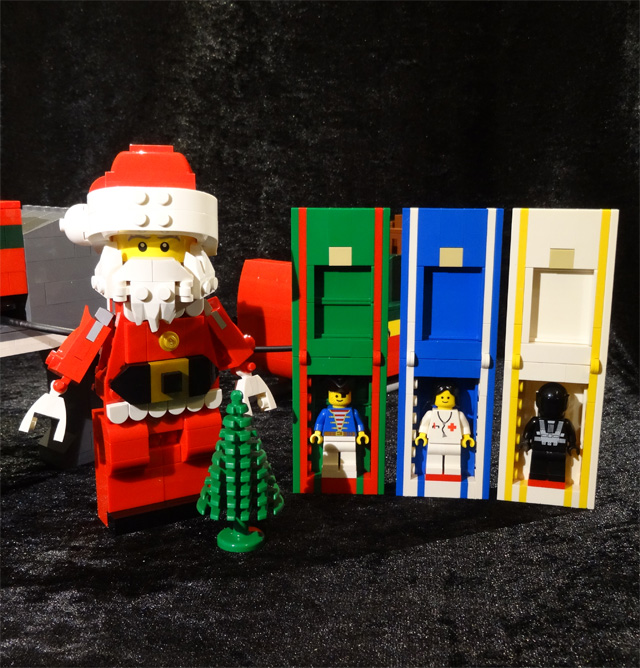 The reindeer is also surprisingly complex. The neck hinges on double balljoints, so it’s tight enough to hold the head. The entire design is based on the classic Lego horse, complete with mid-stride pose and the beady eyes, but there’s a little additional detail and obviously the horns. These actually use two dark tan parts that aren’t available anywhere else. I also love how they made the harness. Two long flexible tubes connect to the gap in the reindeer, like two strings with a stud at the end. Then finally you build a small stack of oversized plates to hold it down.

Even though I got it mostly for the Blacktron figure, this is a really lovely set and it’s too bad that it’s not available commercially. I hope Lego’s recent acquisition of Bricklink doesn’t mean that they will clamp down on ”not for sale” sets like this. It can still be found for around $120, which isn’t that bad considering the size of the finished model. Obviously most of the parts are fairly common, but it makes for a chunky, solid build.