Right after watching Captain Marvel I went out and bought this set, but having my photo booth covered in Lego prevented me from giving this a review until now. So what do we have here?

Making superhero Lego sets is usually an exercise in pointlessness. With few exceptions, the heroes are what matters and any vehicle is usually just a way to get around the license issues, since Lego don’t normally own the ”action figure” rights. Some are actually relevant, like the Quinjets, the Milano and the Benatar, but usually we get a little generic piece of building or something. This set gives us yet another Quinjet, and one of the smaller ones at that. At the same time we have a bigger one from Avengers: Endgame, but this uses a more toned down design mostly in grey with red accents.

It’s a little dull and I won’t be replacing my original Quinjet anytime soon, but it’s a decent build. It’s strangely lacking in features with only twin batteries of missiles and a cargo door leading to a cramped interior space. It’s heavily reliant on stickers, and the outer parts of the wings are unusually brittle by modern Lego standards. It doesn’t seem like a lot of thought was spent on this one.

THe figures then. Carol Danvers herself is a nice movie version but on the lower side in terms of detail. The torso is nicely detailed, but she has no arm or leg printing, the face is reused from Qi´ra (Emilia Clarke’s character in Solo) and the hair is decent but not really accurate. There was a lot more they could have done here. A previous random set had a comic Captain Marvel who still had a secondary head even though she was just a side character there. This one actually works fine with that head. She also should have had an assortment of those power blasts that come in every other superhero set nowadays. As it is, she gets two tiny hand blasts. 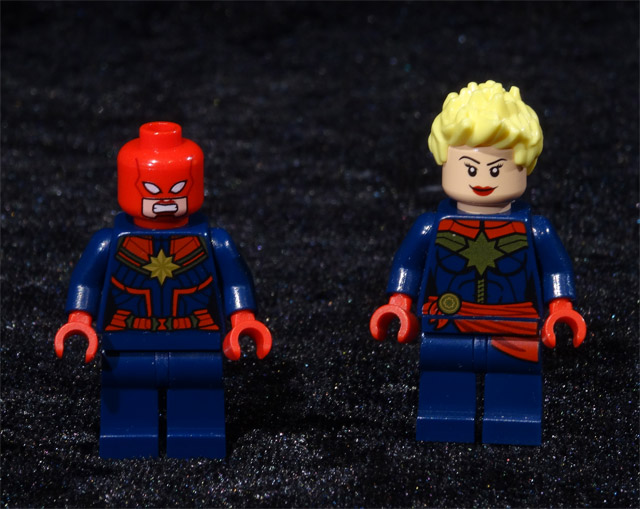 Nick Fury is a decent character on his own. His torso is extremely useful as a generic cop, but I feel that the hair piece is kind of overused for any black character nowadays when his hair in the movie looks nothing like it. His face is also reused from the recent Cyborg. Then we have Talos, who was a surprising highlight of the movie. He looks decent, but the entire premise of the set misses the point of the movie. If he had come with an alternate smiling face, he would have been more useful, now he could represent any generic Skrull. Finally there’s Goose, who is a generic dark orange cat, which makes sense I guess.

Overall this set was surprisingly cheap but also a really disappointing take on the source material which screamed ”oh right, there’s that movie coming out too”. Captain Marvel was great, and she deserves better. Hopefully her next movie will get better Lego sets.