Having barely recovered from the March invasion of Lego’s wonderful and playful Elves, another four sets are assaulting Europe in June (other regions may have to wait). They continue the theme of the year which is dragons, and plenty of them. The Dragon Sanctuary is the second smallest set in this wave, but is still rather sizable. And since it contains another of the big dragons, it’s a must buy. But let’s look at what your money gets you.

The purple wind dragon is built first along with Aira, who has the exact same outfit here as in The Secret Market Place (41176) which seems like a waste, considering that you will need to get both to complete your dragon set. The dragon itself is mostly medium lavender with some aqua on the underbelly and, curiously, on a second set of smaller wings. I’m not sure if it’s supposed to be a different overlay of the bigger wings since they don’t hinge separately, but it gives the dragon a different look than the similarly sized fire dragon from 41175. As always, it’s a great build with tons of SNOT techniques and the end result looks very good but, again, like the fire dragon the legs are fairly hard to pose. 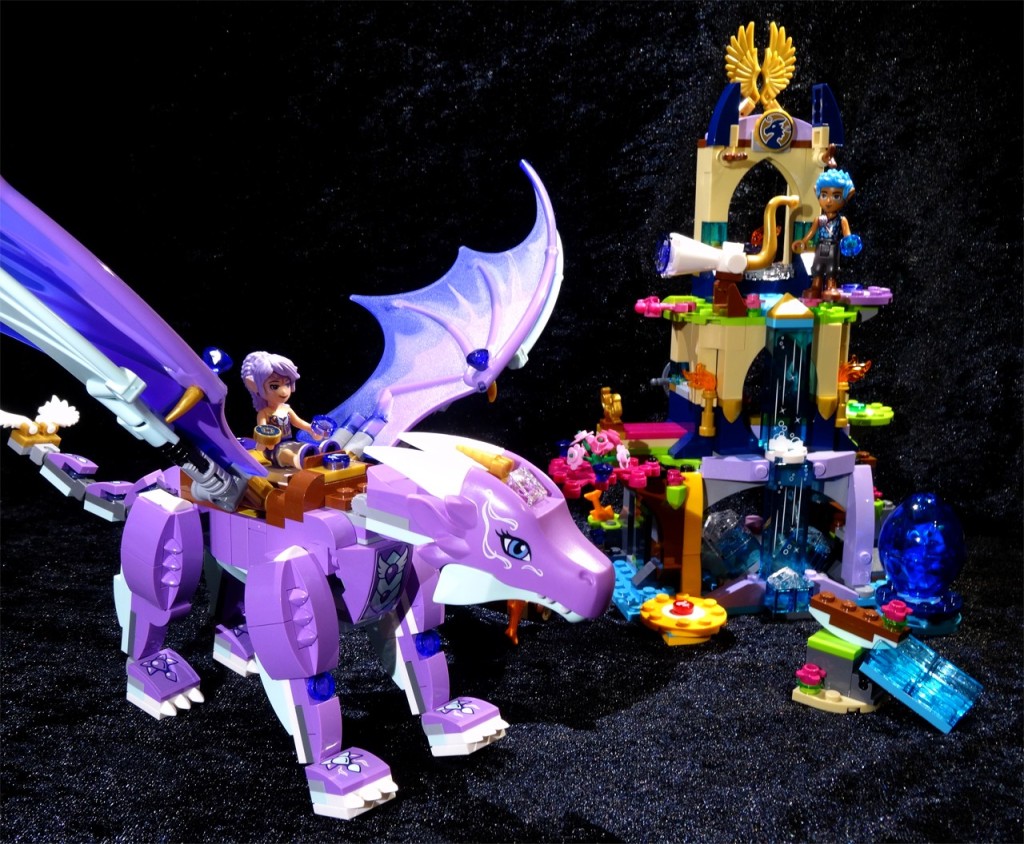 The sanctuary itself features Tidus, the blue-haired and dark-skinned teacher who also appeared previously in the Elvendale School of Dragons (41173). I didn’t get that one so it’s nice to get this male counterpart to Naida. The sanctuary is a towering building with the bottom standing directly in water. A small raft is connected to the side and there are platforms to store the dragon eggs as you collect them (only the blue egg actually comes with the set), so it becomes sort of a display case. Most of the lower section reminds me of Naida’s spa from the first wave.

The second floor is reached by an elevator which rises cleverly by magic (or, if you will, a lever hidden behind). The floor is rather cramped and confused, but there’s a study inside with an extending platform I haven’t found a use for, and another egg holder. Up top, possibly reached through a ladder, is the observation deck with the final egg and a crystal fountain, as well as some kind of megaphone.

My overall impression of the sanctuary is that it’s a bit messy. Like the Sky Castle last year, it has references to all the elemental designs but in such a small space it looks confused. There aren’t really many interesting parts, although the 4×4 round plates with holes in five different colours are probably hard to find. The dragon itself is excellent, but aside from the wings it doesn’t add much new. You’re going to want all five anyway, but if you have to choose, I would probably bump this down the priority list.