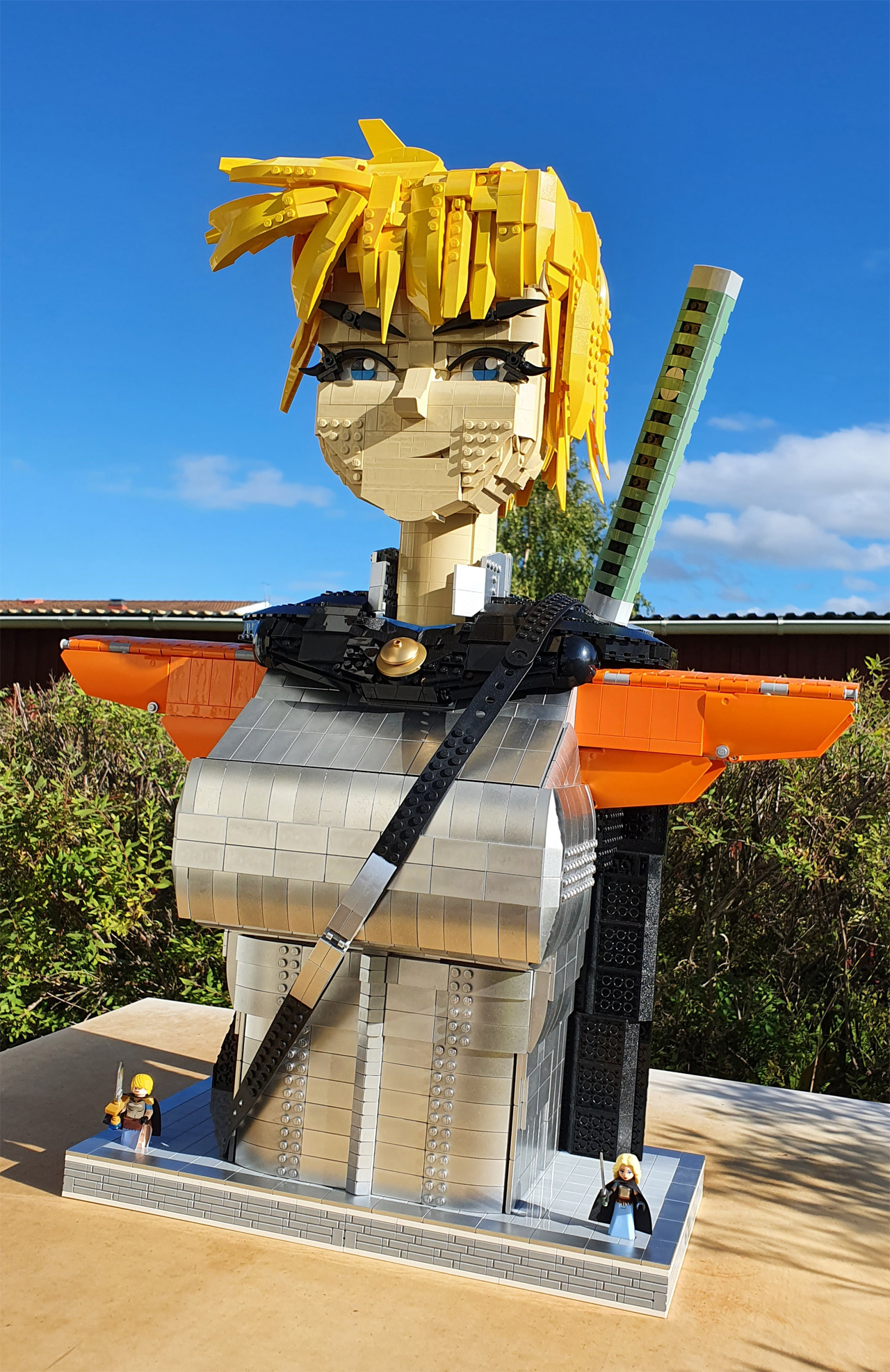 The seed part was the 2×4 metallic silver tile that was made available in a Lugbulk deal almost two years ago now after having been introduced through the Aston Martin. I’ve always liked the metallic silver Lego colour, and it made me think: now what could I make if I had vast amounts of that part? Since Shaana is dressed in shining armor, it didn’t take long for an idea to take form. I didn’t have any specific design in mind, but I was inspired by the recent UCS figures of Yoda and BB-8, where the figure is built in sections on top of a Technic framework. While I was waiting for delivery of the parts, I started planning. 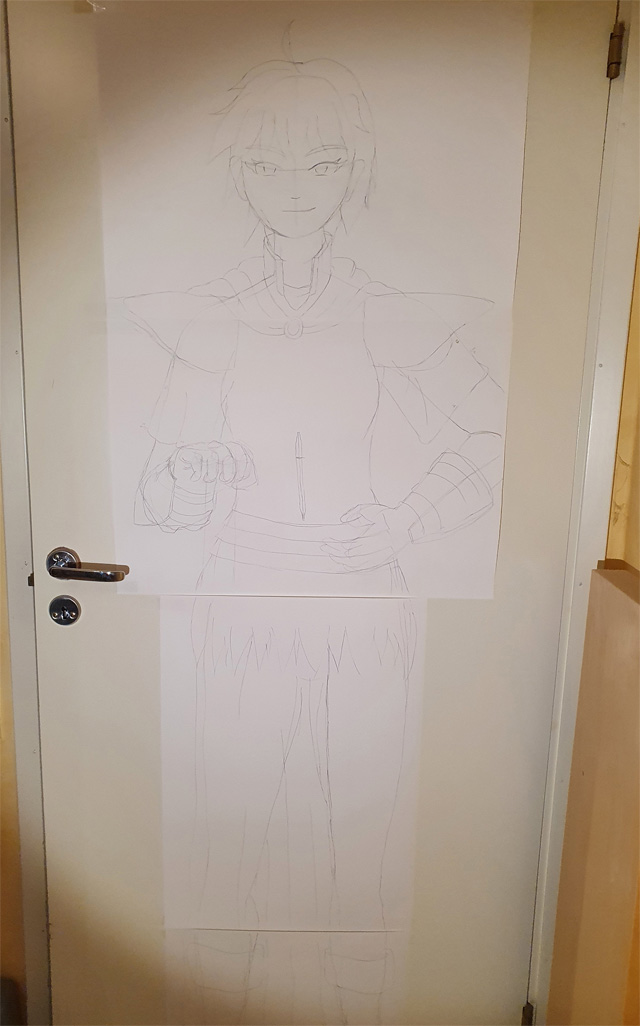 Since I wanted to make her to scale, the process began with drawing a 1:1 sketch of her to get the proportions right. I never really planned to make a full body build (because that would be crazy, right?), but I needed the full sketch to get it right. I then sketch built the face and stuck it onto some shaky Technic beams that went down to a boxy shape where I started to form her upper torso, basically a ribcage. This required some experimentation, and all the angles make for a quite complex structure, especially the two different slopes down her chest. Basically, the upper section hangs down from the shoulders while the lower one extends up. 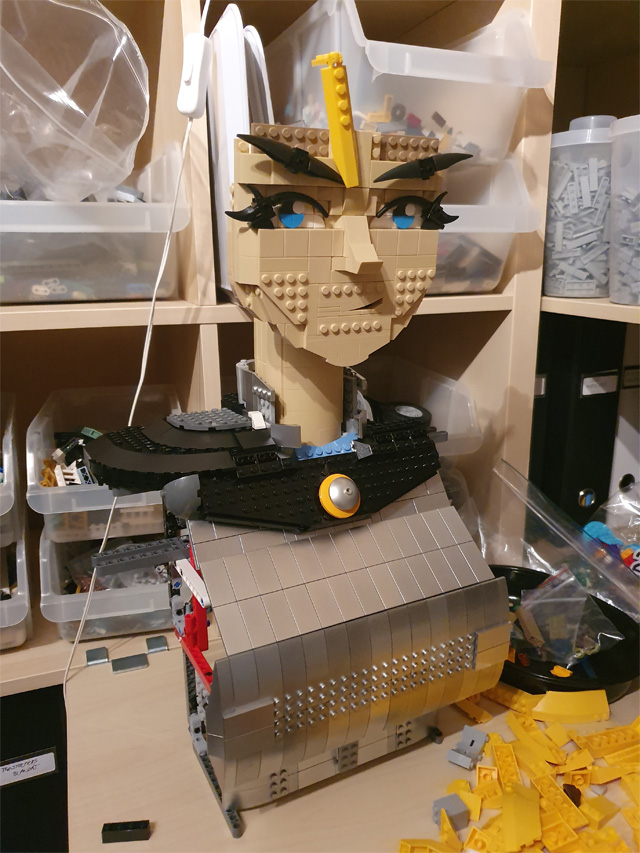 It soon became apparent that I needed more silver parts to shape her. The 2×4 tiles would serve as the larger areas, but around her chest I needed something more … curved. Luckily such a part exists, the curved slope 6×2 (part #44126). However, it was only produced once, in 2005. There were three sellers with a decent amount of the part, but only one had a somewhat realistic price. So I ended up buying basically a third of Bricklink’s supply of the part. I also got several other useful parts, like the Windscreen 5×2 (only in an 2009 Agents set) and some 6×2 wedges (also only in the 2005 set). Hey, isn’t it great how Lego once produced one-off parts for all kinds of random sets and nearly bankrupted themselves? 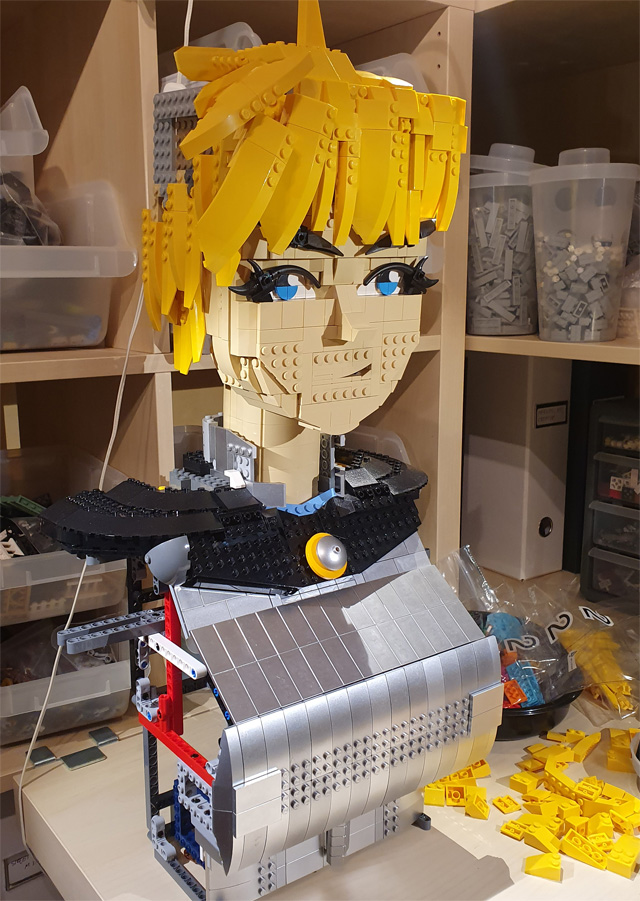 Once I had the parts it was mostly a case of building everything in sections and reinforcing the structure as I went along. When I started adding features to the head, it soon became apparent that I needed to make the neck stronger. Ultimately it’s a sequence of 6×4 Technic bricks that go over a 2×4 structure of Technic beams, covered with curved slopes. It rests on parts of the shoulders, but to make this strong enough I basically needed an actual skeleton, so there’s collar bones in there, and for strength I eventually needed to make a core spine. 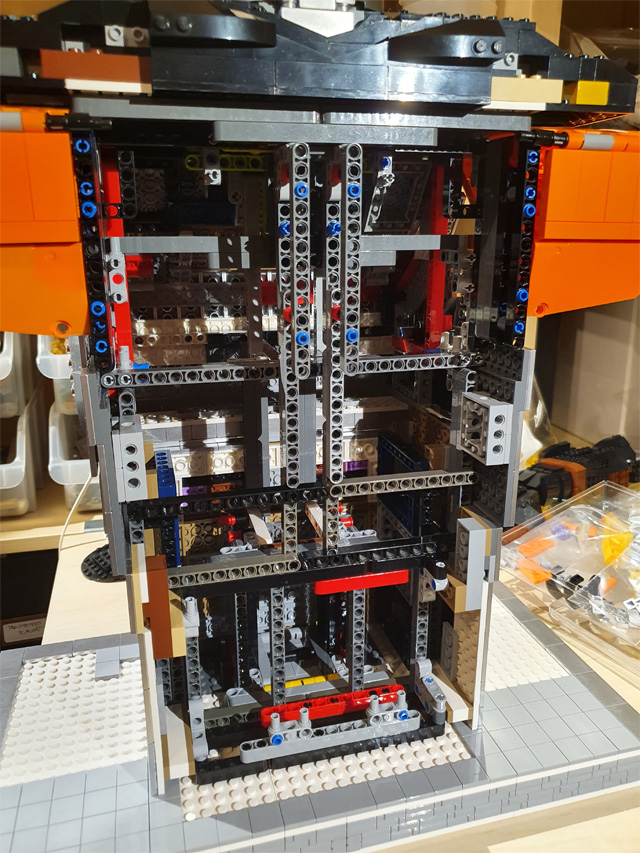 The head is a boxy structure built on top of that neck part, and then covered with sections of the hair and the face. Everything lifts off fairly easily so that I can work on the parts separately. The face was the very first part I built, based on the proportions of the sketch, and it changed very little. Getting the eyes right was the most important, and from there it was just a case of combining slopes to shape the jaw. For a long time there was just a flat surface, but once I had the head structure in place I built backwards. Ultimately, the face and cheeks are one piece that clip around the lower parts of the plates that hold the hair on each side. The hair itself required a lot of special orders since I didn’t have much of yellow slopes around, but it was fairly straightforward. 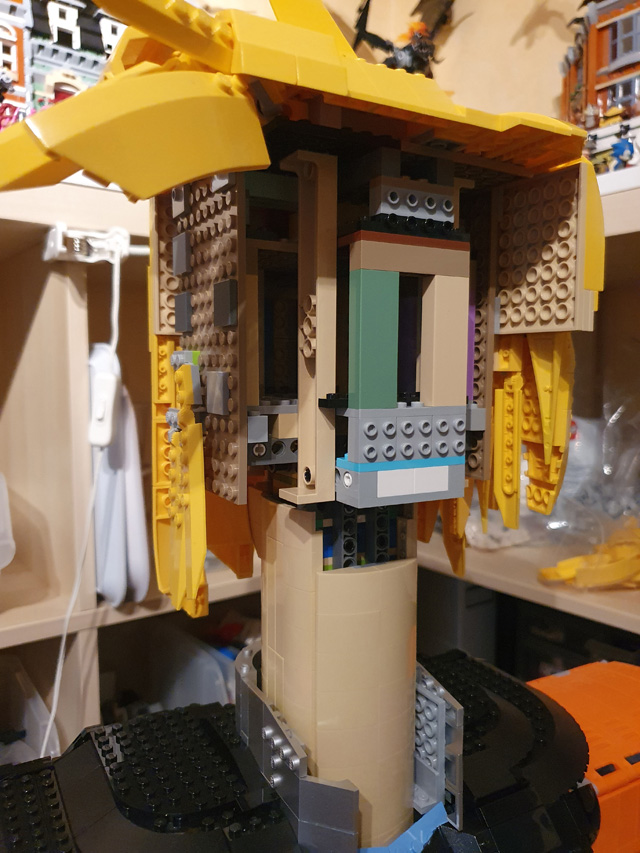 Moving on down, the upper shoulders are covered by her cloak, so it was mostly a case of finding the right black parts. Some roof parts from the Sydney Opera House helped here, making for great sweeping round corners in this scale. The neck guard is made from various parts in metallic silver, including the macaroni parts that only came with the Sopwith Camel plane. She needs to have a golden pin for her cloak, and luckily the recent Apollo 11 Lunar Lander introduced the 4×4 dish in metallic gold, and the 3×3 dish has been around some time. The front part of the cape used to sit on the armor section, but it turned out that the tolerances worked much better when it was simply hinged down 45 degrees from the shoulders. 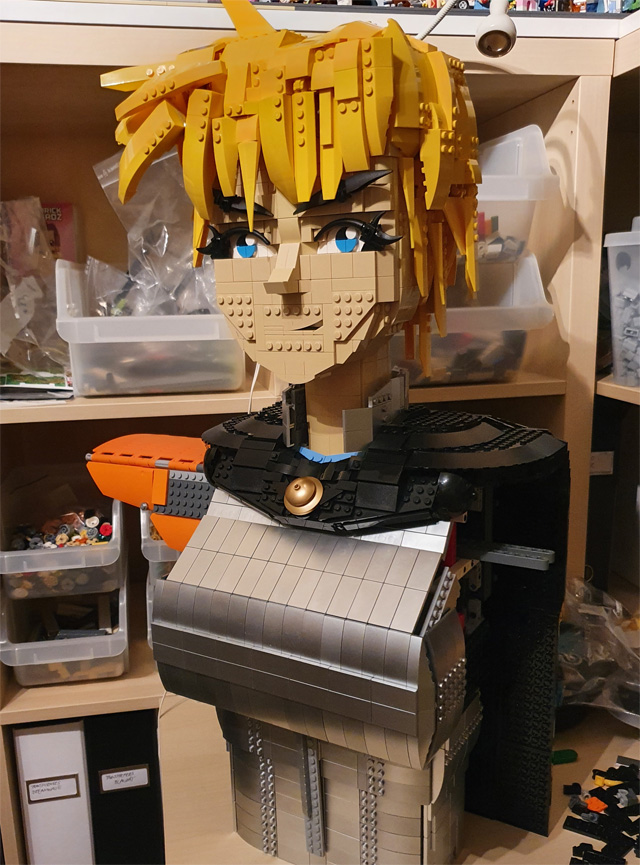 The shoulder parts are a constant issue with her design and I haven’t ever quite nailed them down. I think she replaces them every so often, since they are reinforced leather and slightly bendable, so they’ll look different over time. For these, I considered making just a plate build on top of some structure, but large plates in orange are super rare. But there’s a useful curved Technic panel, originally from the Porsche 911. So basically she’s wearing a Porsche hood on her shoulders. The sides are other Technic panels, connected by a small section of plates and tiles. 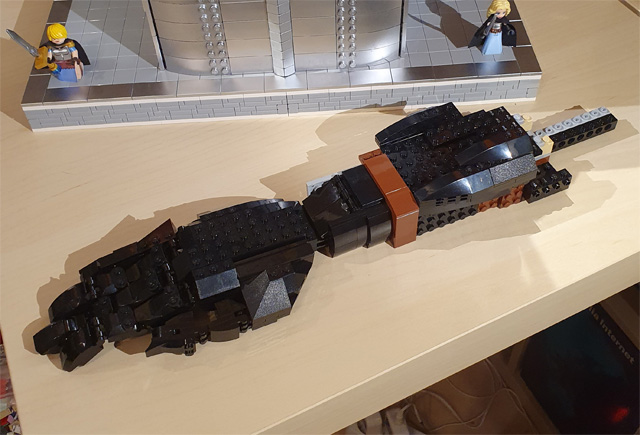 Around this time I needed to decide what to do with the arms. I had lengthened the torso by twelve studs, but it still wasn’t quite long enough, and I didn’t want to go overboard. I had built a right hand for her, complete with posable fingers, and I started working on a lower arm but I couldn’t find a way to make it fit well within the proportions and the pose. So I finally dedided to just make this a bust, and the holes in the armor are covered up by plates.

Before I could finish up the armor, which was still mostly the front, I needed to make the cloak. It a huge sheet of plates, with some modifications around the shoulder pads, and mostly covered in roof tile slopes. It connects to the upper shoulders and along the spine. 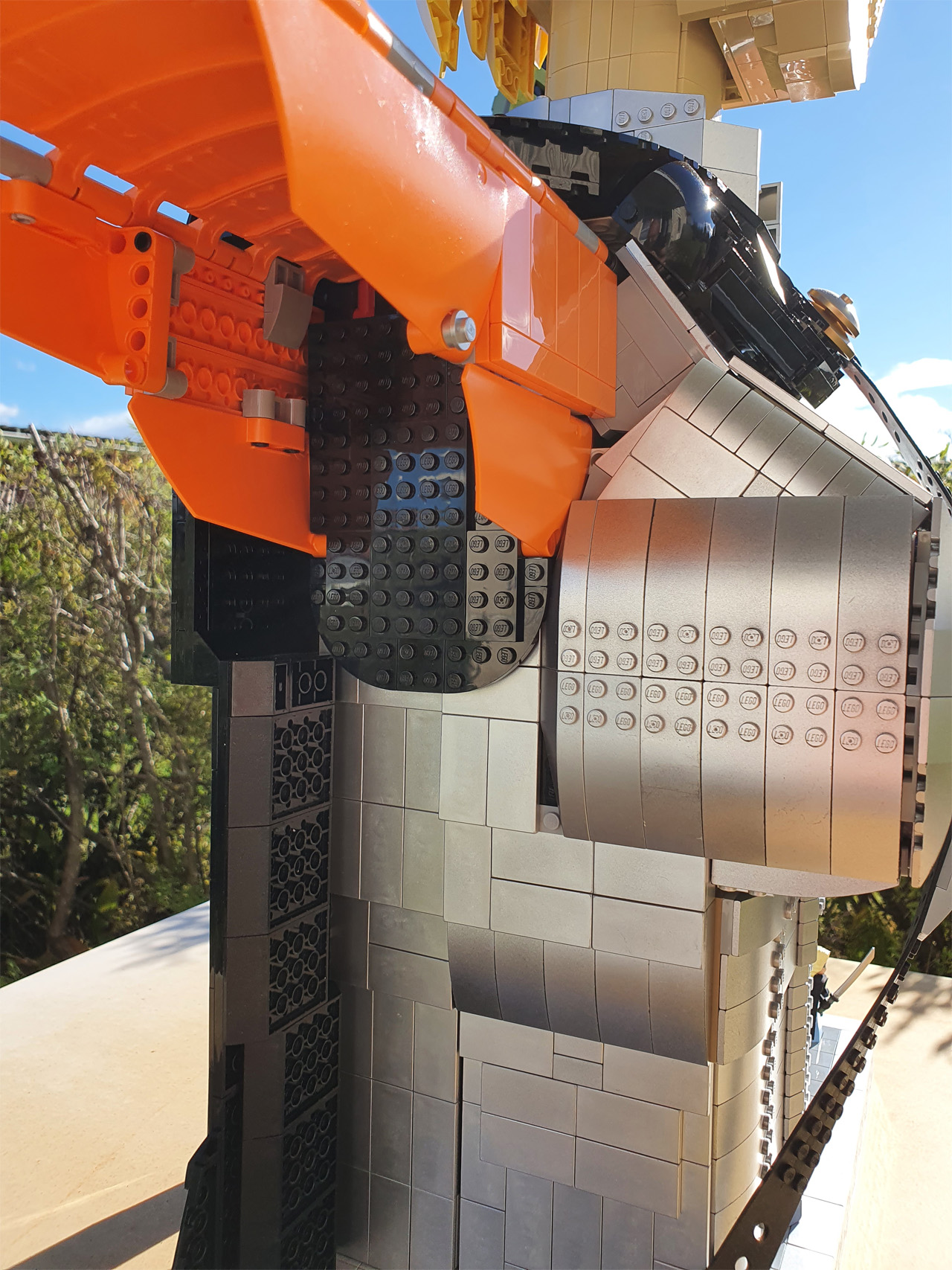 After that, I knew how far I needed to extend the armor, and this was mostly done with the same techniques, fitting tiles onto plates and then attaching them to the Technic skeleton. After having finished the shoulder pads, I also got started on the dreaded armpit area. Having three planes of plates along her front is one thing, filling in the sides of that is another completely. The lower curve was easy as it conforms to the regular square structure. The middle section was harder, but I managed to fill it with small 1×2 curved slopes, originally from the Mini Cooper. This section slots under the first one. Finally, I cheated a tiny bit with the last triangular corner, which is simply built with grey bricks down from the tiles to fit snugly behind the shoulder pad. 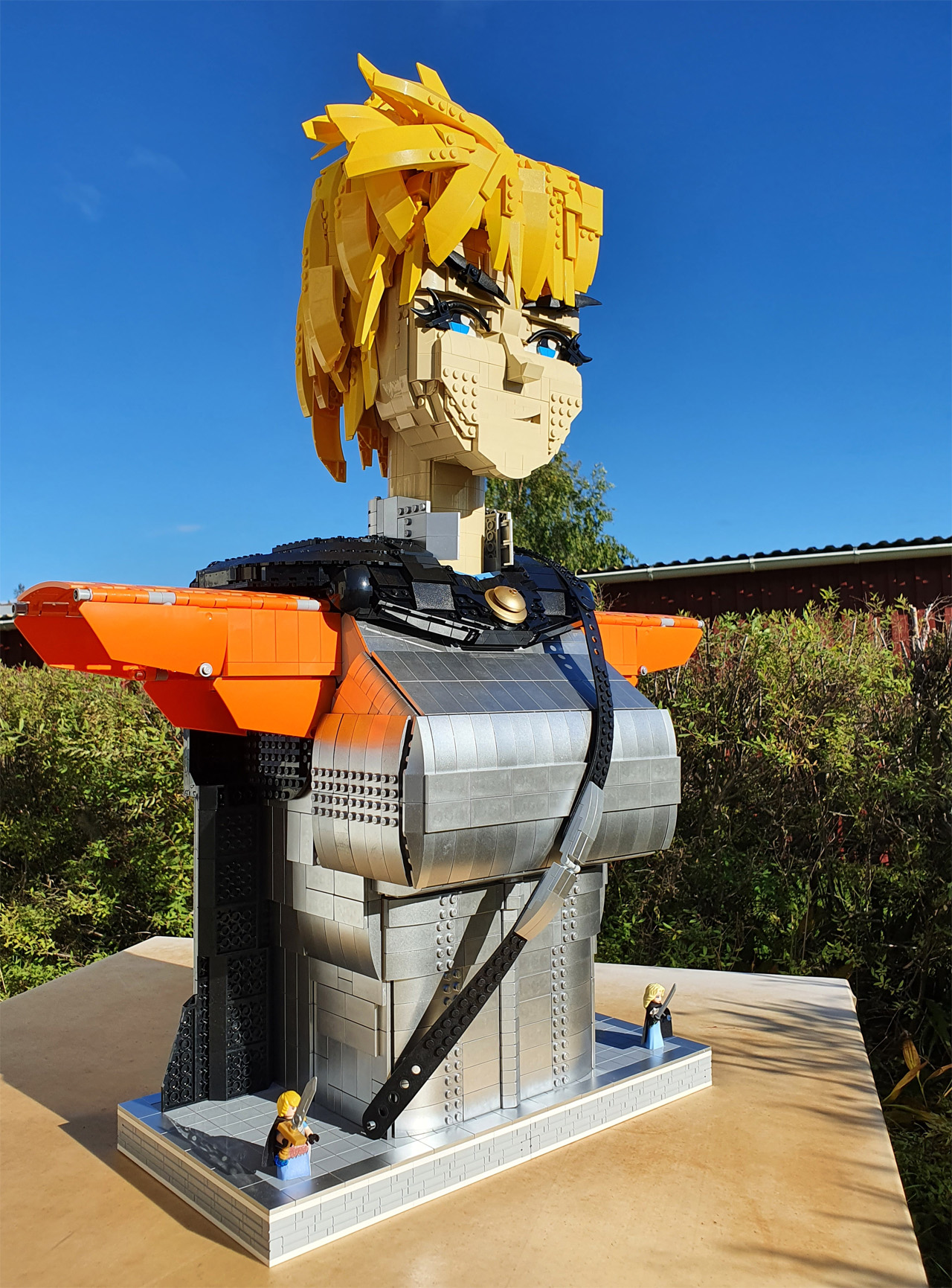 As I needed some final parts to finish this up, I realized that there’s no simple way to move this around. The skeleton is stable enough, but she’s quite top-heavy with a partly solid head, and the armor parts don’t hold up too well to pressure. The best way to carry her was simply grabbing the spine, but that wouldn’t work once she was complete. I had left some spare Technic connectors in case I wanted to continue building more of her body, and I came up with a way to hook some Technic beams into these, attached to two large sections of a display base. These clamp together similarly to the Sydney Opera House base, and it’s rock solid. From there it was just a case of finishing it up and providing room for my previous minifig versions. 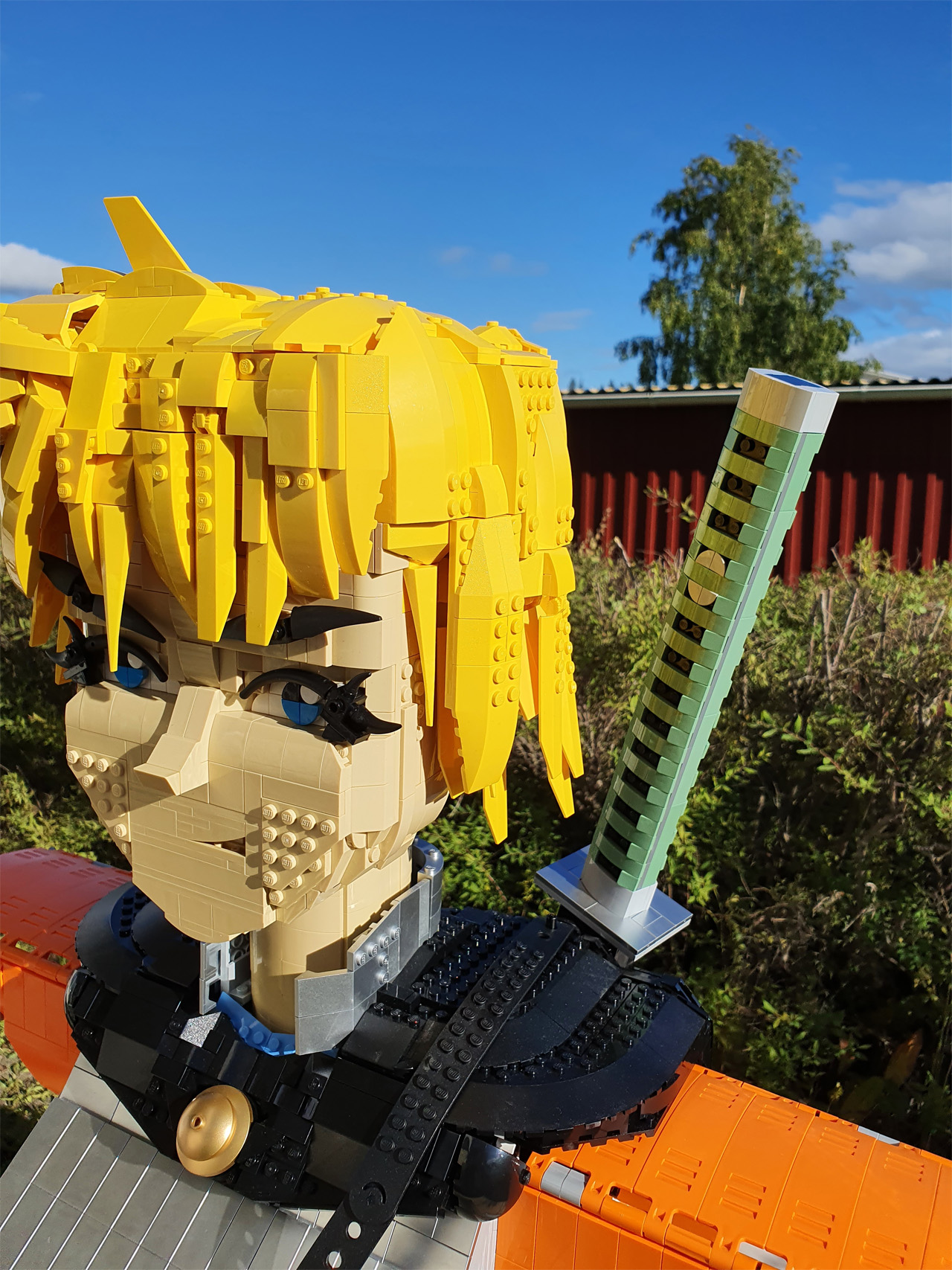 And then I thought that I was done, until I realized that it needed a little something extra. On my pictures of her, Shaana has her sword strapped on her back. So I needed to build that. The blade isn’t actually there, but the scabbard and hilt are based on my own sword and modelled to scale. And instead of using a line of hinges to form the strap, the obvious choice was to go for DOTS bracelets. It’s held on with Technic pins and the strap holds the sword in place. And while waiting for those parts to arrive, I had a few more additions to make. I added some more bulk to the hair and refined the face. 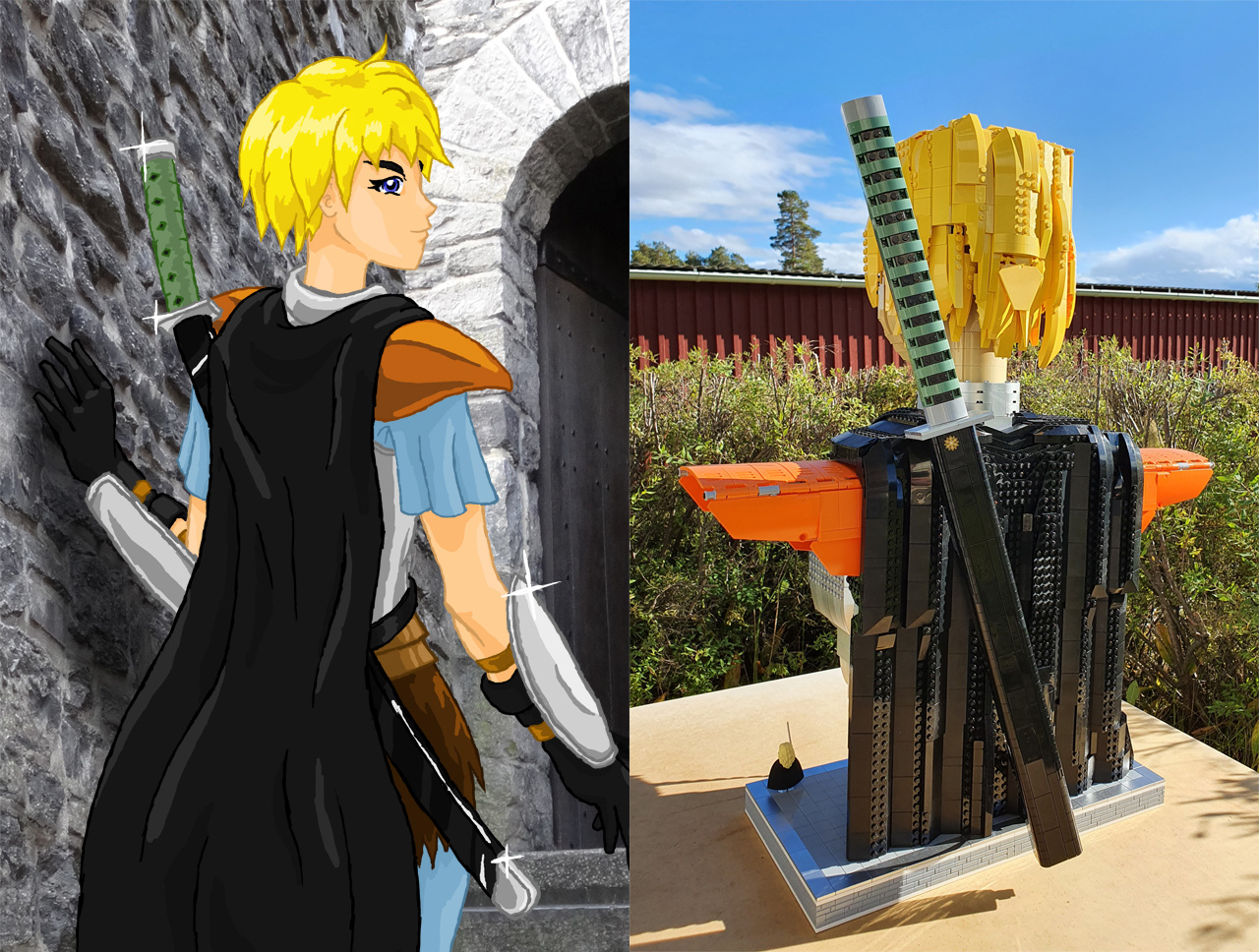 The final build stands 70 cm tall including the base, 54 cm wide across the shoulder pads and 22 cm deep. I ended up using around 120 of the 2×4 silver tiles and 86 of the 6×2 silver slopes. There’s hundreds of Technic beams inside her and I actually managed to run out of Technic pins, which I thought would never happen. She is stable enough that I don’t need to worry about display, but for transport I will need to remove the head since it adds a lot of stress on the neck connection. Structurally, almost everything comes off easily in sections if I need to change anything.

But this is it. I’m very happy with how this turned out. Now I just needs to find her the perfect display space she deserves. 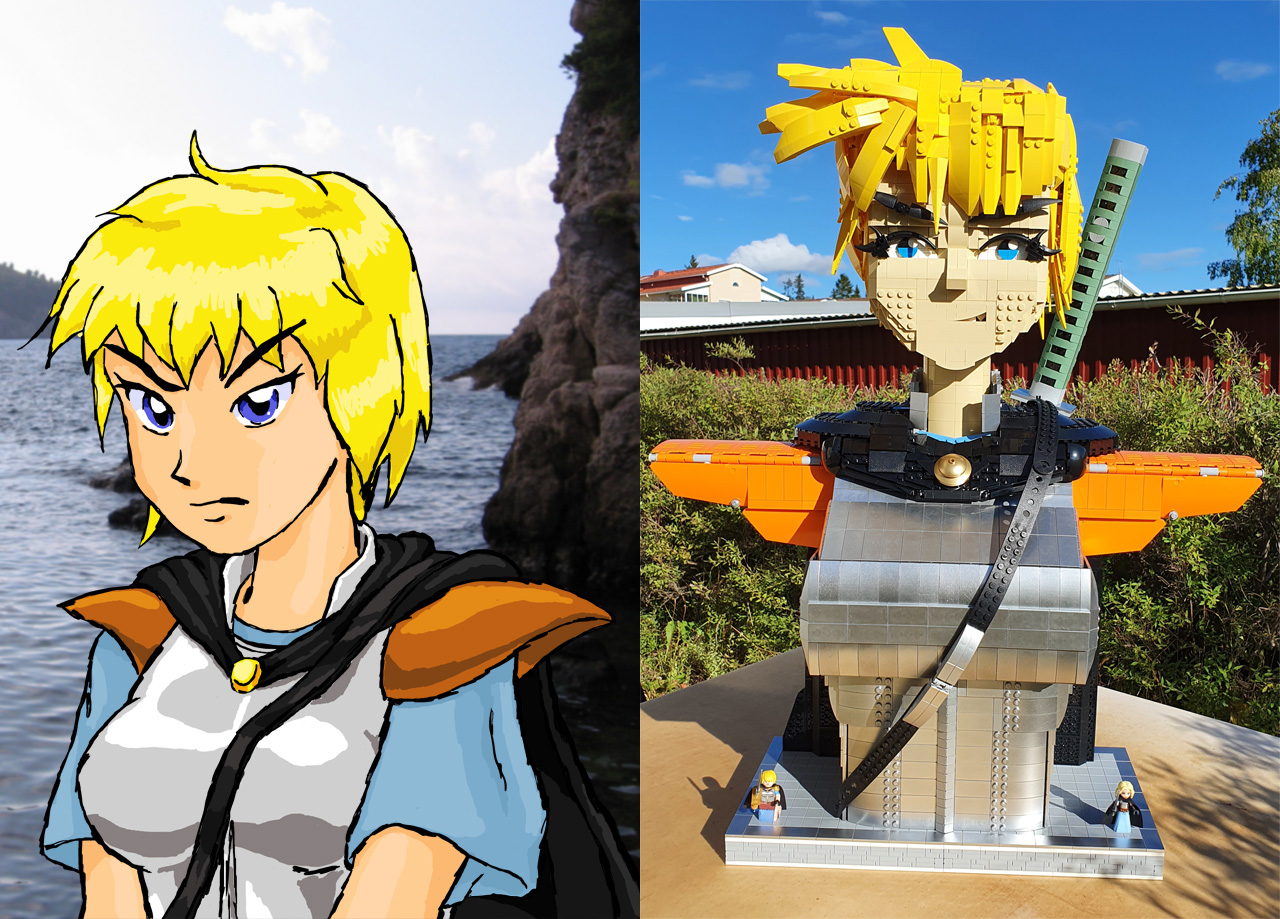