Building something out of Lego stimulates creativity and I often get my ideas for a new creation while I’m in the middle of another. This happened with The 1987 House. I was building the Old Theater and reflected on the fact that most of the parts that are used in modern modular buildings are actually really old. It’s like a response to the idea that ”Lego is just custom parts nowadays”, which is of course entirely stupid.

There isn’t really a good summary of which parts were available when – New Elementary was unfortunately not around in the 50’s and Brickset mostly only covers new sets. So I simply used the Bricklink search by year and made notes of interesting parts. I had to set a target date and settled on 1987. The idea was that I would have been able to build this house 30 years ago – if I had a huge number of sets and a really inspired mind for a kid. So it only includes parts that had been in sets by that time. Some are surprisingly old.

Let’s take the modified 2×2 plate with hole, that Jamie Berard is so fond of. That appeared in 1966! The 60’s also saw a range of windows which were made for the smaller scale Legoland sets but work nicely for minifig scale when stacked. Arches appeared in the 70’s, along with turntables, jumper plates and opening doors. 1980 saw the birth of the headlight ”Erling” brick which is so infinitely useful, as well as the first clips and round plates. A few years later we got the bricks with grooves, then for garage doors but also useful for the Green Grocer facade. The longer 1×8 plate with rail appeared in 1983. I didn’t end up using the hinged plates, but they are from 1987 along with T shaped pneumatic connectors, the corner plate and the grille plate. The first 1×4 bracket also turned up, but it’s not as useful as the 2×2 variants. Also, most importantly, the 1×4 tile appeared. While I probably wouldn’t have been able to use this many grey ones since a single one only came in one big set, it still counts.

I decided early on to build this from used parts, since it’s very hard to find old grey in new condition. This had another benefit. I could easily use the cool windows from the 60’s, and I could also integrate unique Fabuland parts. This theme used many big specialized parts (in 1979, no less). I had toyed with the idea of making an entire Fabuland modular, but using the playful windows (which are mounted in 2x6x7 panels) was a good compromise. I also loved the ferris wheel mount (how’s THAT for a specialized part?) which makes for a great chimney! Another unique old part is the early minifig leg part, which was useful for the blue facade. 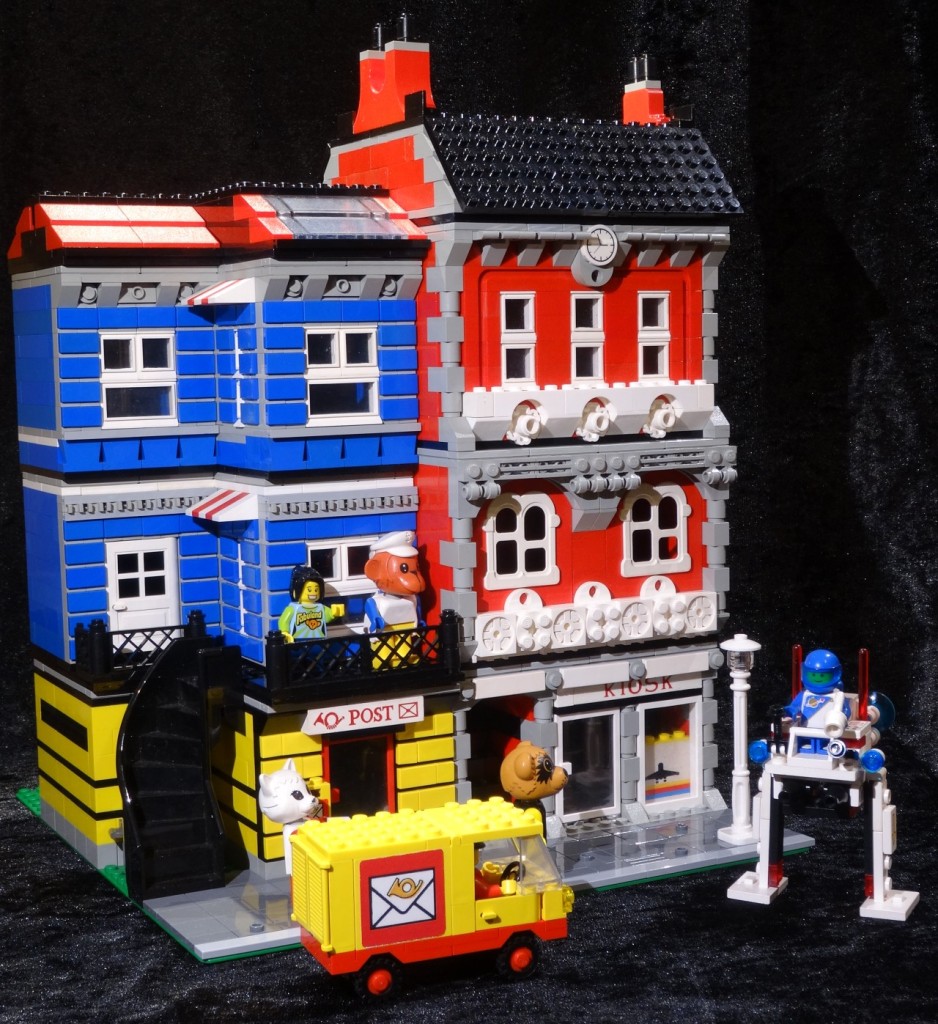 With all this, there is every opportunity to build a reasonably modern modular with 30+ years old parts, with one obvious restriction. Lego didn’t have anywhere near the current selection of colours. Red, blue, yellow, grey, white and black were basically it. I already have a red modular and a few dark red ones, but I made sure to add plenty of white and grey to it. For the left house I used tons and tons of Erling bricks to make walls, where the yellow and blue are broken up by ”mortar” in contrast colours. This building was going to have a black roof as well, but I wanted to use the red parts that were in my original Lego. Overall, maybe a fifth of this building is from my original collection, as I wanted to use as much of that as possible. Even with ordering used parts my old stuff is much more worn, but in this case I’m fine with it. Except for the standard modular sidewalk, 99 percent of the parts are used, although I had to use a few replacements to fix some mistakes.

While I wanted generic apartments up top, the ground floors should be shops and they were decided mostly by what printed bricks I could find. Since one would be yellow, it worked nicely with a post office, which is also an establishment that is missing in the modular series. The one on the right was going to be a tobacco store since early Lego had plenty of such signs (and it’s something that never ever ever ever would be released today), but the stores I ordered from only had a ”KIOSK” one which was a bit more neutral.

Except for my original parts, I needed to make four orders for this which is a fairly good result. Some parts like the windows and the hinge part used for the railing around the clock were extremely uncommon and I had to get a few from each shop. On my last order, I realised that I had forgotten to get a mailbox, and was happy to find that original mail truck which has a spare. The set was in excellent condition, so it will stay around in the city. 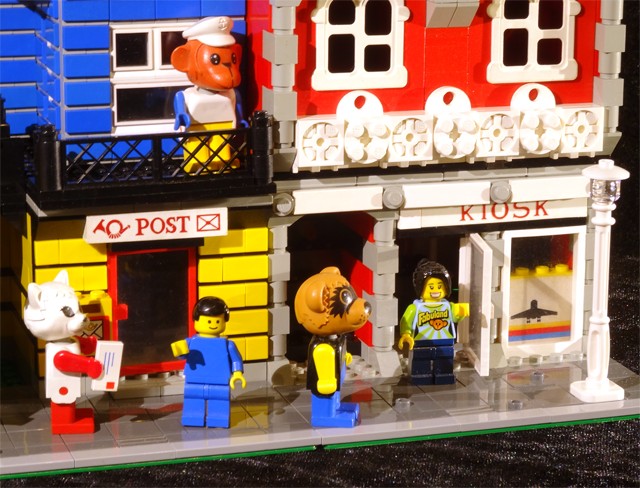 I’ve long since ran out of space in my city layout, but I’ll need to keep this for later. I’m very happy with it, moreso than the Old Theater actually. It’s fascinating to find that I could have built this ages ago, and it reminds me of the huge city layouts in Legoland Billund, which were also obviously built with old parts. I strongly suggest every builder to try out a restriction like this.