One of the early modular buildings was 2009′s Fire Brigade, but Lego has been strangely reluctant to make a modular version of their ever-green police stations that turn up yearly in the City line. As a result, it was both a relief and a bit weird to finally see it released. However, Lego couldn’t have picked a worse time to make it, with much of the year spent protesting police brutality in the US. This is perhaps a more idealized police force – although let’s not try to pretend that the police of the early-mid 1900′s had any higher regard for minorities. With that in mind, let’s see what this building has to offer. 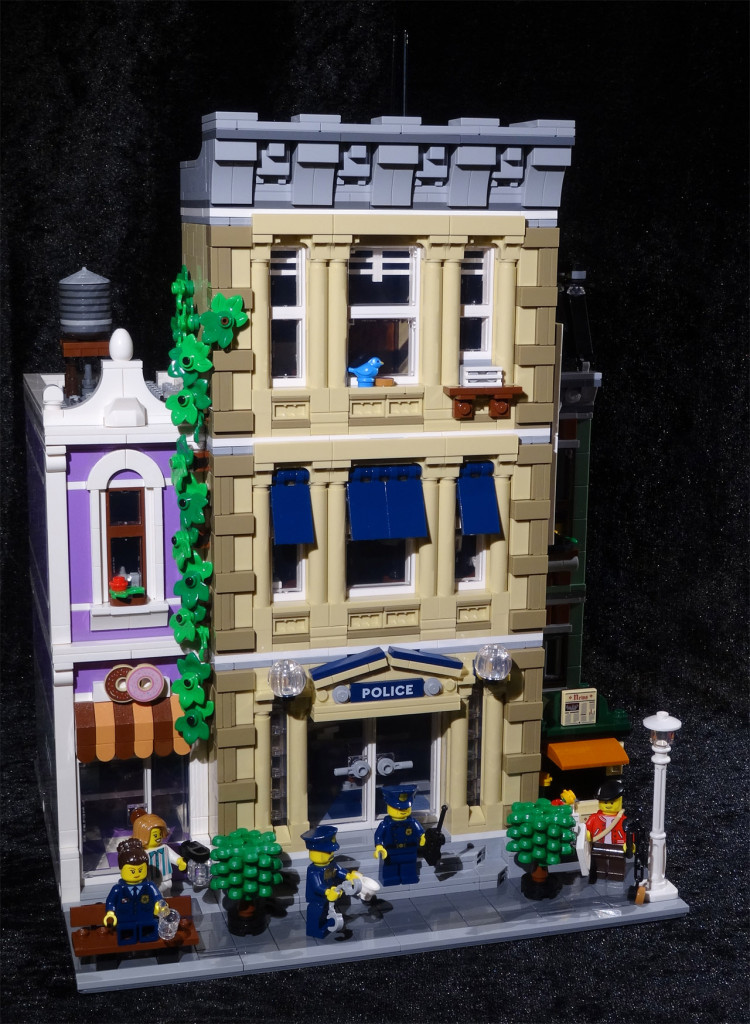 Recently, Lego has moved away from the 32 stud wide monoliths of the early modular line, and instead having two or three buildings shoved together to make for a more interesting skyline. For anyone who spends time in a big, aged city it’s quite accurate, with tiny shops squeezing into whatever space was originally left as alleyways between two larger buildings. And I don’t mind it at all. If anything, it adds even more colour and liveliness to the street.

However, the main building, the actual police station, is a bit of a compromise. It has the look of a larger governmental monolith with its columns and solemn colours, but it’s still barely half the width of the set. In return there’s quite a lot of detail on the front, but once again I’m not too impressed with it.

Going back to the Fire Brigade, it was mind-blowing that they would actually cover the building in Erling bricks with tiles to represent actual brickwork. Looking back, the technique is positively quaint in comparison and there’s some new parts and clever building to achieve the edges of the building, the small awning over the entrance and the in-set decor under each window. But it feels more like doing something complicated only to show off. Also, while it’s cool how they’re using the bottoms of jumper plates to add detail, that detail isn’t very pretty. Using the original jumpers with a center peg would have made more of an impact, but those aren’t produced anymore. In the same way, using Minecraft wolf heads for the detail near the top of the roof is funny but doesn’t make much architectural sense.

The left building is too narrow to have any real character, but the lavender colour is a nice touch and it’s pretty enough. With the new parts available making the snotted sides to the window is super simple, but it’s still nice. Compared to the water tanks of top of the Fire Brigade and the Detective’s Office though, this one is almost insultingly plain. Finally, there’s green part to the right, which is actually an extension of the police station itself. I don’t really like how the window sections sit further out than the green walls, and there’s really not much detail. 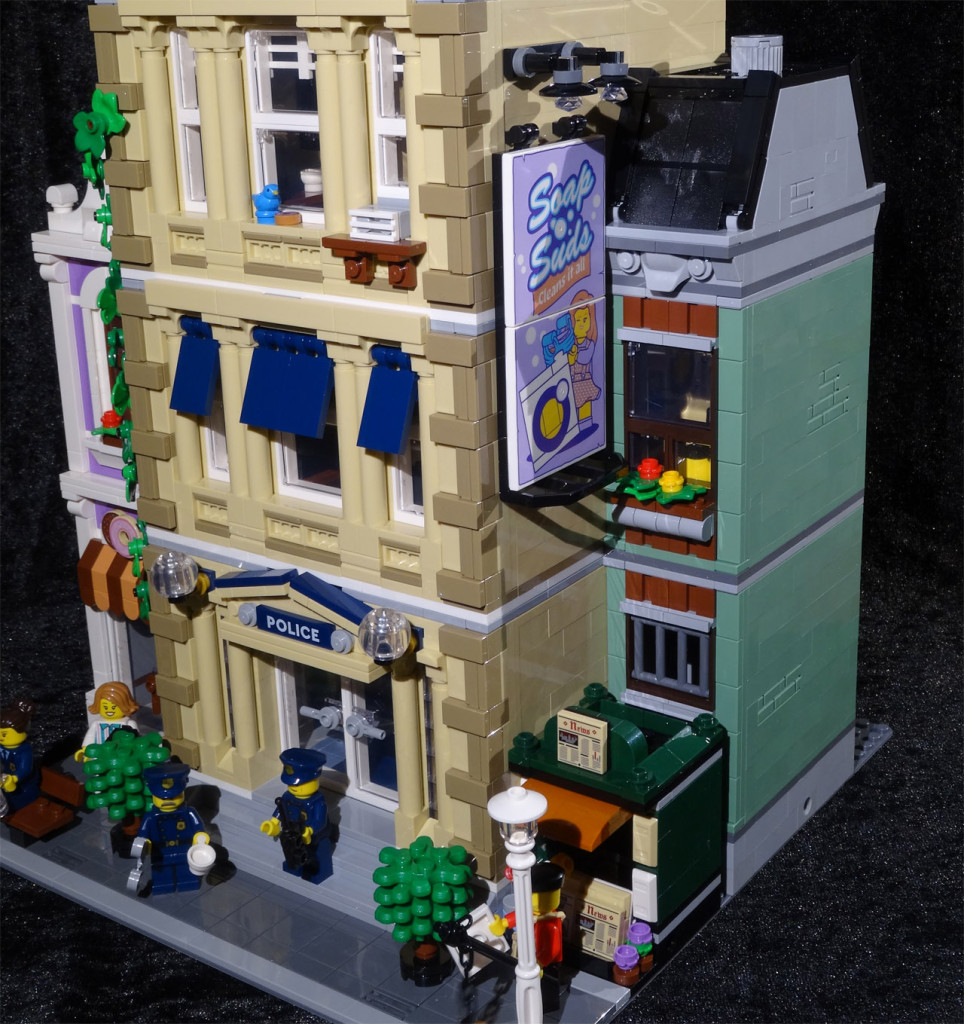 The newsstand adds a lot of character to the set and it’s neat although simple. It also ties into the storyline of the set, where the owner goes to great lengths to steal from the donut shop next door, to make news to sell. The donut shop has a tiny footprint but a decent amount of detail inside, and the shelves are well placed diagonally. The small apartment on top has a feature where you can tip up the bed to expose a hole which the newsguy uses for his donut heists. The apartment itself has a little neat kitchen, but it’s ultimately an awkward use of the space and it’s ridiculously inconvenient to get to, with access only through the fire escape ladder.

The main police station building opens to a raised floor with a reception desk, a water cooler, stairs to the back door and a jail cell. You’d think a small downtown police station wouldn’t have long-term prisoners, but this cell has an extensive feature where the bunk can be raised to uncover an escape tunnel in progress. There’s an entire cavity under a removable floor which is neat but ultimately a strange play feature. 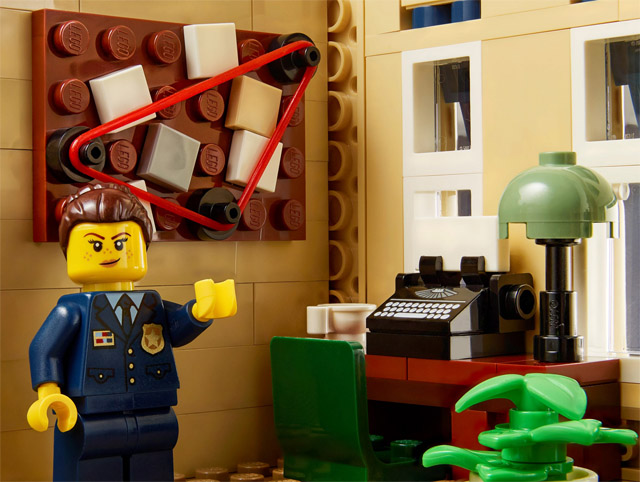 The stairs are actually one of the highlights of the set’s construction. While they look like ordinary concrete stairs, they’re made out of simple 45 degree wall bricks and attached sideways, with the stepped parts naturally becoming stairs. The second floor is simple but has some of the best detail work. There are two desks for police officers, one with a phone and one with a compact typewriter, both using printed slopes for technical detail. There’s also a neat evidence board with a rubber band representing string to connect the dots. The corner above the cell in the green section has a photo booth for newly arrested criminals.

The top floor is actually divided into a surprisingly small rooms. There’s the staircase, a small attic space for gathered evidence, a small toilet and the chief’s office. None of these are very remarkable. Outside, a ladder leads from the lavender building onto the police station roof, which should provide ample space for a bat signal or two. On the other side there’s a huge printed billboard promoting the washer from the Brick Bank set. Also, a very nicely detailed vine stretches across the entire left corner of the building.

Despite the attempts at a storyline, I think a big flaw of this set is that it lacks character. The buildings are fairly plain and there’s not even very much making this a police station to begin with. This could, of course be a benefit, as there’s plenty of other uses for it. With small changes it could be a Gotham City PD, or a Daily Bugle or other fictional newsrooms. There’s also plenty of usable space outside and on the rooftops for whatever superhero themed battles you’d like to stage. 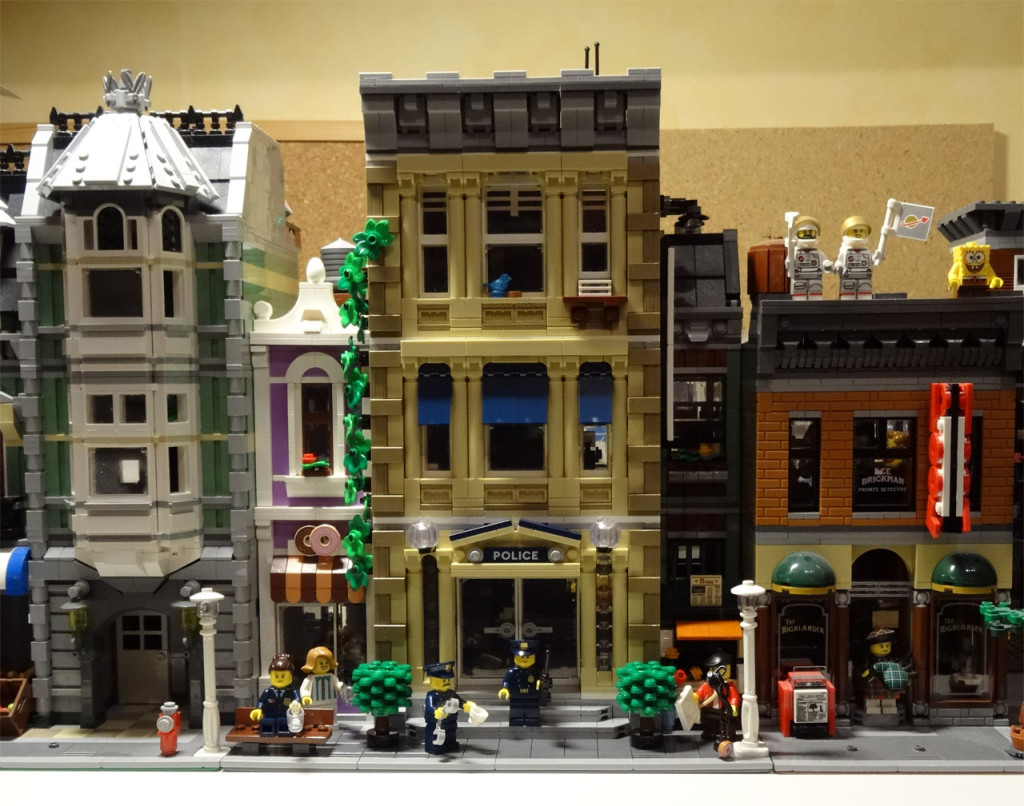 At the same price as the Corner Garage, Police Station is a fairly expensive set but compared to others in Lego’s range these days it’s almost mid-priced. With 2923 pieces it’s a decent value and takes many hours to build. I can’t however shake the feeling that I’m not as impressed by these centerpiece sets anymore. Last year’s Book Shop had much more charm, but before that only Assembly Square has really impressed me in the last several years. There’s also the matter of space. With this being the 16th official modular (with Market Street firmly established as official), you need a ton of room for this expensive, although impressive range of sets.