Last year I visited Belgium and stayed in Gent, a lovely town that shares many qualities with Bruges but is much less of a tourist trap. I walked up and down the streets being amazed by every other building. One on Belfortstraat stood out in particular, with its striking green windows and brickworks that really screamed Lego. The proportions were also suited for a complete build, without removing parts of it. 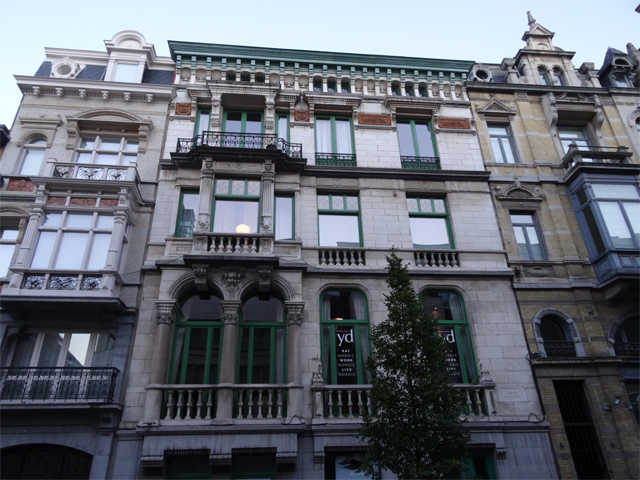 I didn’t get started until this year though. The major inspiration was the Downtown Diner with its tiled walls, giving the square proportions the original had. From there I built the entire front of the building. Here I made my only purchases, since I didn’t have the green windows needed. It’s … a little scary that I had everything else. 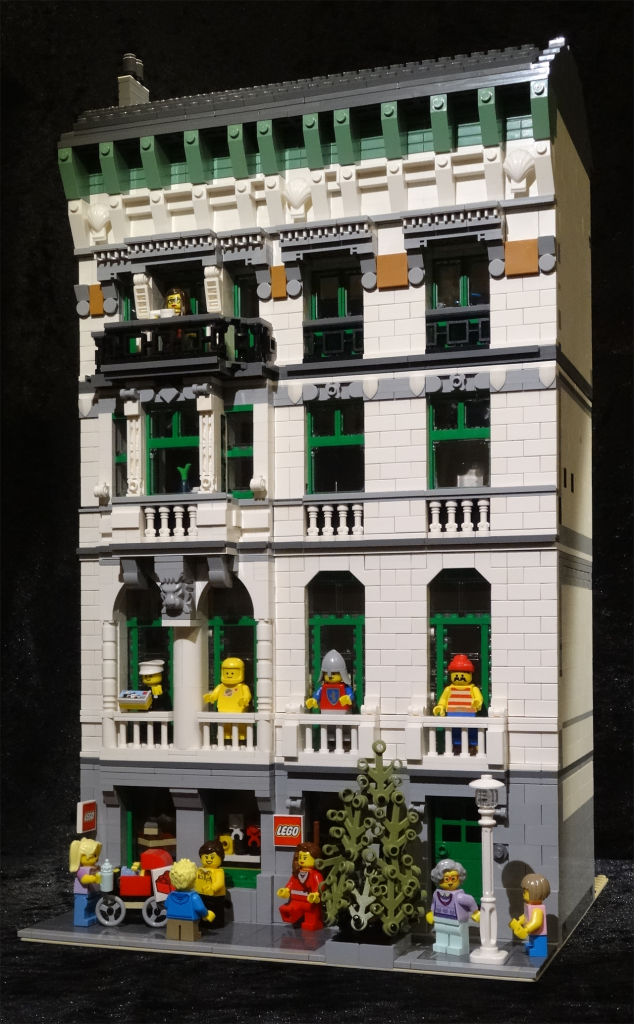 I struggled with an interior though. For some time I planned a bathhouse, so I gathered up suitable minifigures and had a vague floor plan. The first floor would be a reception and changing rooms. The second floor would be the big family pools. Third floor would be a hot tub area, and fourth floor would have saunas. However, as Lego released several brand themed sets including the mini store, the classic policeman and the Series 1 CMF bags I realized that it was time to make a Lego Store and I didn’t want to wait until I got onto my next modular. 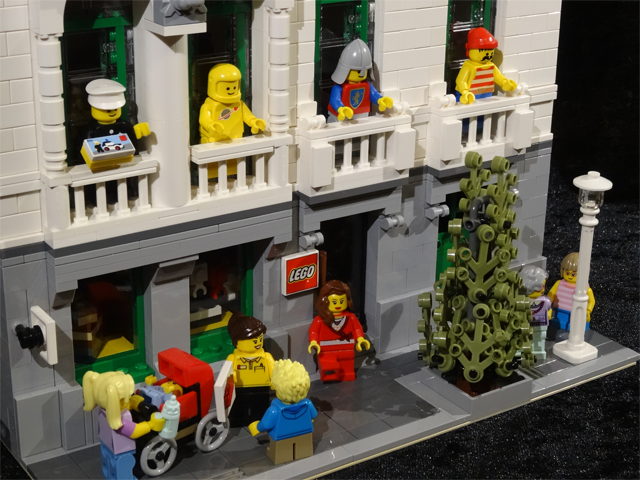 The sidewalk is quite straight-forward. It was a bit tricky to align the parts under the windows (hidden behind people here) but I made a sliding axle to set it. The tree is just a quick mock-up that was allowed to stay. I came up with the ”statues” in the last second. I had placed three of those classic figures inside as life-sized statues, but I thought it was a bit of a waste. So I put them all outside and also rummaged through my original figures to put together a pirate, so that all four classic themes are represented. Also note the miniature Café Corner and Black Seas Barracuda in the windows. 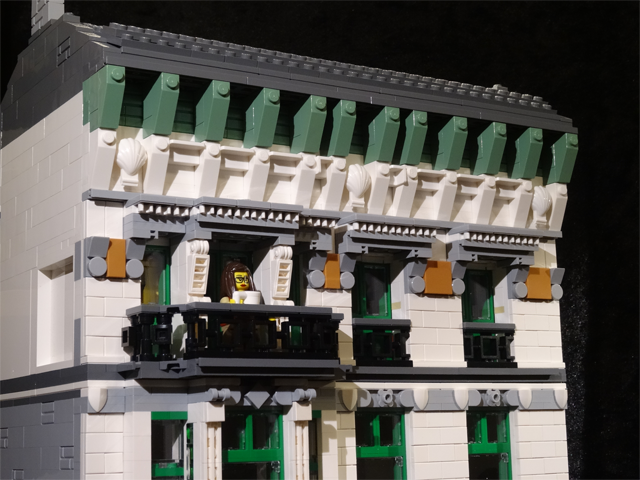 Most of the facade is built on plates, like in Downtown Diner. There are some neat details to replicate the original building. Once I finished the four floors I added the top section with the sand green. At this point I simplified a bit of the detail since I was running out of parts. 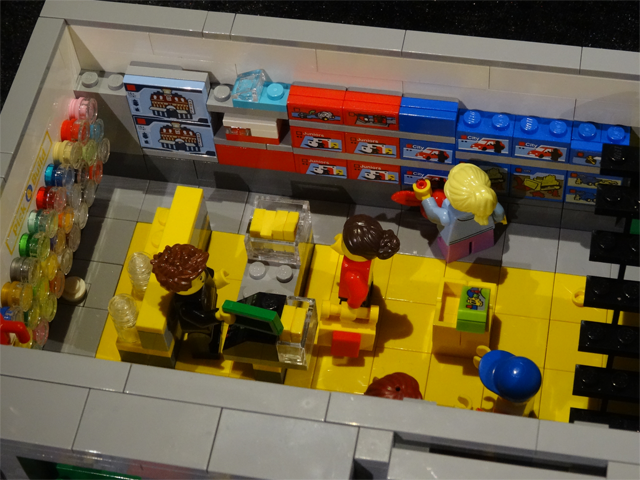 Let’s go inside! The first floor has a fairly standard Lego Store layout. I used the Pick & Build sticker from the promotional VIP set and added a ton of parts bins. In fact all of them are different colors! The back wall was mostly covered with various stickered boxes from the VIP set, the recent Lego Store set and the exclusive store opening set. I also got a few spare Café Corner boxes from Lego Bricks & Pieces. If you look very closely you can see the Series 1 CMF bags stacked along the register, although only the first in each bin is actually the printed part. 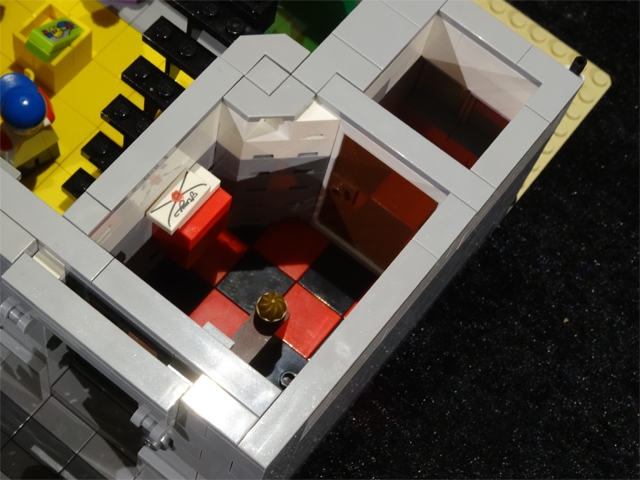 The side door leads to a small hallway with only a mail bin, a little space for a doorman, and the elevator upstairs. I only built the elevator shaft through all floors. The mail bin has a Lego sticker on the back, visible from the stairs. 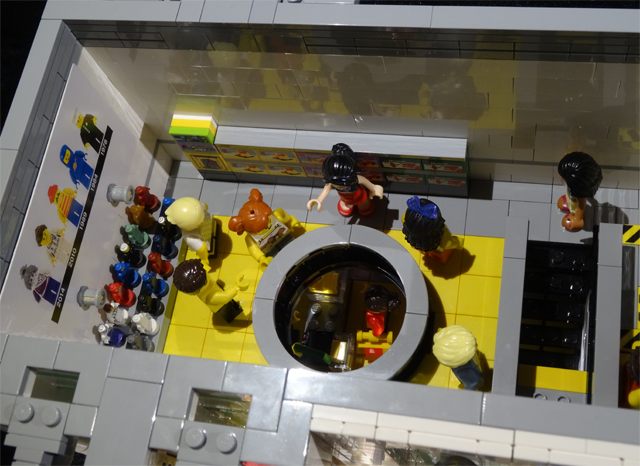 The second floor of the Lego Store has the rest of the themed boxes, as well as a display based on the special nanofigure set they released. The cardboard banner worked well as a poster here. Also note the circular railings. I like when there is a connection between floors like this and the Lego Dimensions baseplate provided a suitable hole here. To the right, outside the picture, is a small train display that has a miniature Emerald Night set on it (one of few sets I’ve had to dismiss as too expensive these days). 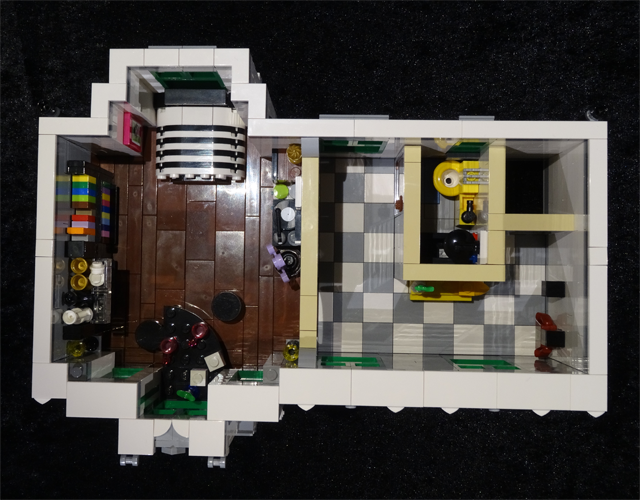 I struggled once more with the third and fourth floor. After making the first floor a Lego Store I had intended to make the rest of the house a fancy neo-classical apartment, and had built the entire second floor. But I couldn’t come up with anything neat to build the other two floors, so when the store expanded to two floors, I picked up an OLD idea. Back when I made the Trendy Arcade in 2013, I had planned to make a modern apartment set in the eighties. I could finally do that here. The hallway is rather simple with only a few decorations. I made a very compact bathroom with shower and tub. 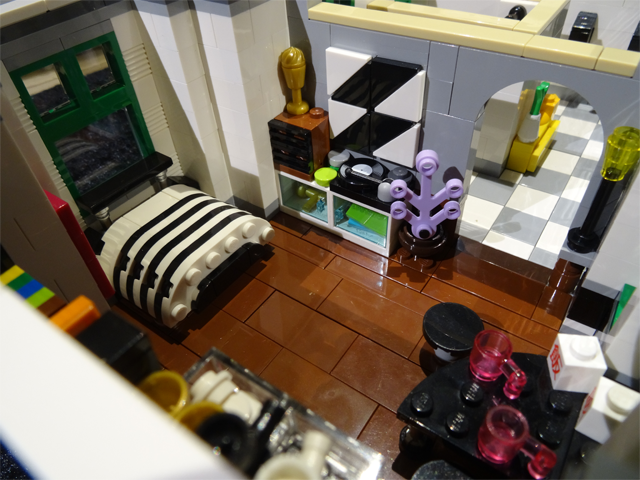 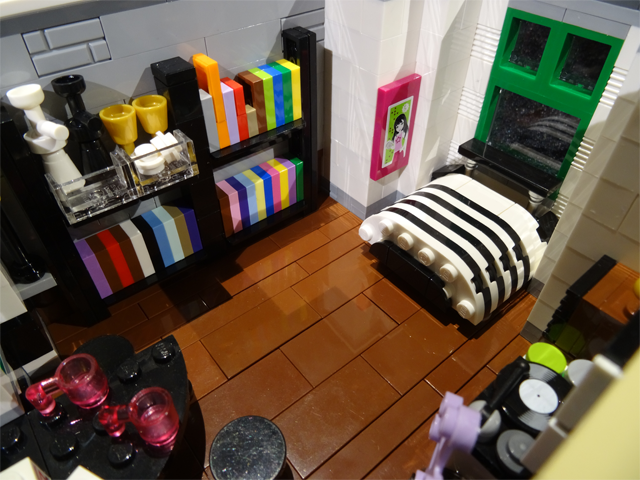 Most of the effort was spent on the main living room. The bed is made from rounded plates and is raised on silver parts, because everything in the eighties was black and white on silver legs. The colors carry across to the painting on the wall. There’s also a record player and various stuff. The book shelf was fun to do – it’s only attached to a single stud although it’s also resting on shelves that attach to the wall. 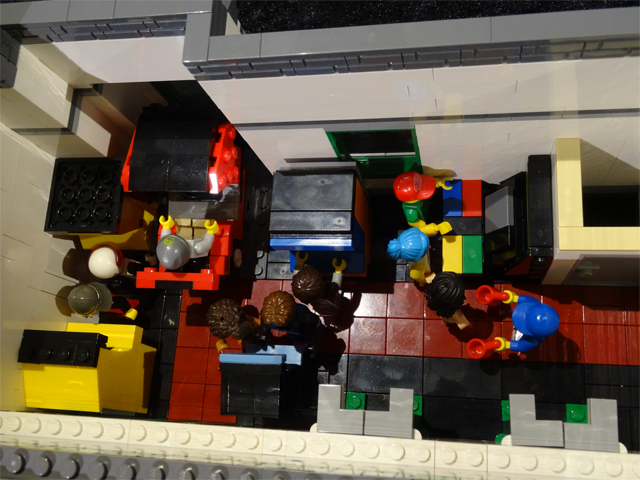 Finally we come to the top floor. This was my final conundrum. I still had vague ideas about a classical apartment as a contrast to the modern one below. Then I got the idea to clear out my old Trendy Arcade (since it was getting kind of old) and restoring the Grand Emporium. This left me with a ton of arcade cabinets. So the top floor became an arcade. There’s very little room to move but I guess that’s an accurate depiction. There are three double doors here to french balconies as well as the main balcony. These take up a bit of room that could have housed a few more cabinets, but I didn’t want to remove the fancy opening doors I spent so much time building. 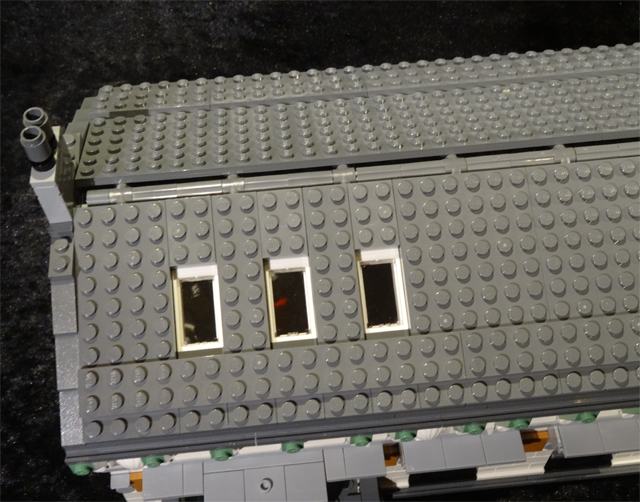 And then a note on the roof. This is fairly accurate to the original building, although nothing of the back is accurate. Thanks to Google Maps I could zoom down and view the building from above, something I obviously couldn’t do on the trip. This is the only surface that is not tiled, because I tend to place a ton of figures on my rooftops. It’s pretty sturdy, using the angled Technic connections to hold the two halves together. 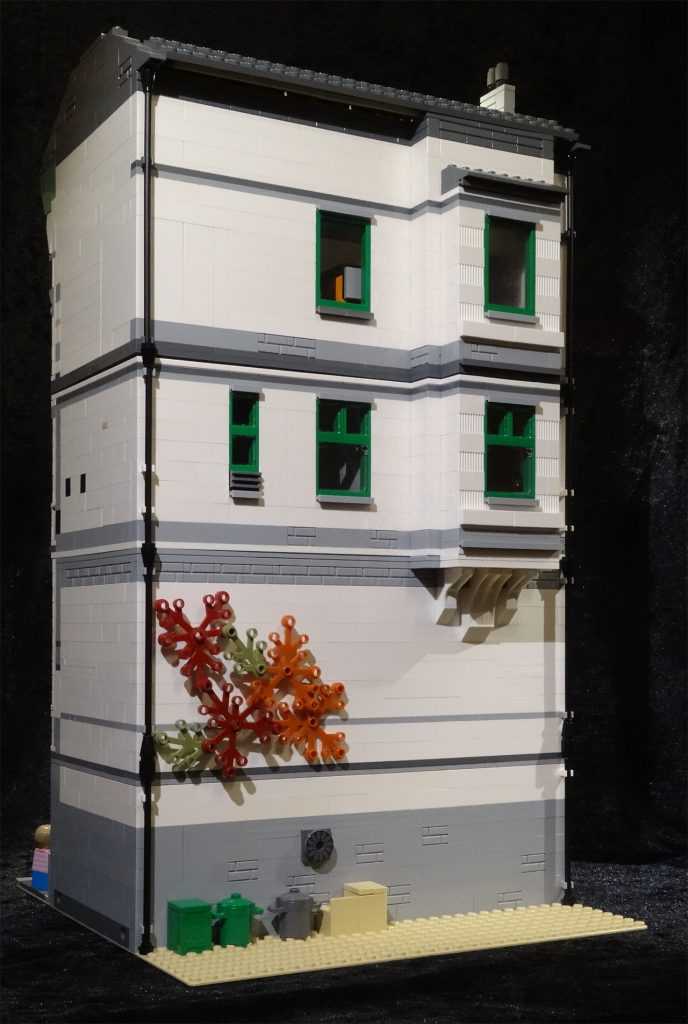 This build took a long time and occupied my building/photo area far too long. But I’m very happy with it. It’s also one of my largest builds so it will need careful placing in my city. Now I already have plans for at least two other buildings but I also want to get back to Gent at some point. Both in terms of building and actually visiting, of course.