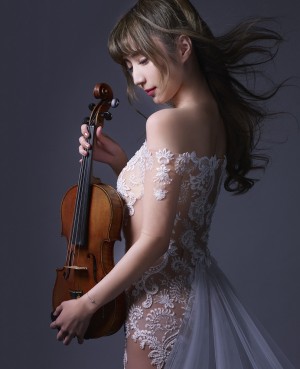 According to a Japanese study, Sarah Alainn’s voice has therapeutically beneficial qualities. That is probably the scientific reason why I can’t stop listening to this amazingly talented woman. Ever since I discovered the theme to Xenoblade Chronicles, I’ve tracked down her albums and collaborations and she rarely disappoints with a mix of powerful musical ballads, classical pop and instrumental pieces. Yes, in addition to having a pitch perfect voice, she’s also an excellent violinist. Anima is the fourth solo album after Celeste, Sarah and F, and it continues the upward spiral in quality, with some amazing highlights and a very solid baseline.

On this album, Sarah covers a selection of well-known songs. After her collaboration with Andrea Bocelli, it’s not surprising to see ”Canto Della Terra” and ”Con te Partiro”, the latter more known as ”Time to Say Goodbye”. Both are in Italian and well performed. ”Nella Fantasia” is a song by Ennio Morricone from the movie The Mission, which was also covered by Sofia Källgren on her Cinema Paradiso, but here also in Italian rather than the translated ”A Rose Among Thorns”. Rounding up the covers, Sarah also makes a very acoustic rendition of Leonard Cohen’s ”Hallelujah”. It’s impressive to hear the lower reaches of her three octave range, and a song style that is very different from her ordinary bright ballads.

Even the weaker songs are of very high quality. ”Animus” is an instrumental violin piece for Sarah to showcase that skill, and reminds me a bit of ”Appassionato” and ”Shadows of Time” on her previous album. ”Cosmos” is a sweet piano and string ballad, and the final track ”Glory” is the theme to a Square-Enix mobile game, but still a rather neat musical ballad.

Moving on to the really great songs, we begin with ”Bring the Snow”, which is the main theme to the upcoming Moomin movie. It’s an happy, positive ballad with vibes of ”Both Sides Now” which Sarah sang on her first album. Similarly great but very different is ”Fantasy on Ice”, a theme to the figure skating show with the same name. It’s a dramatic song, partly operatic rock, partly Riverdance and partly techno, which includes a violin solo and includes some nods to ”Eye of the Tiger” at the end.

If you, like me, discovered Sarah Alainn via Yasunori Mitsuda’s celtic arrangements, you’ll be happy to hear ”Sky’s Calling”. With amazing verses where the strings accompany Sarah’s angelic voice, and hints of celtic violins here and there, it’s every bit as great as the previous ”Dream As One”, which incidentally returns on this album with a Japanese translation. While this song is used for a Japanese TV show, it wouldn’t be out of place in another Xenogears game. And finally, ”Little Doll”, the powerful climax of a musical that doesn’t exist. This song also comes in English and Japanese versions, and is equally amazing in both languages.

Looking back, Anima lacks the very highest highs of the previous album, but it also removes the skippable tracks entirely, adding up to a remarkably solid collection of songs that will be in permanent rotation for years to come.