After four albums with a mix of songs from classic ballads, game music, musicals and movie songs Sarah Alainn releases a new album consisting almost entirely of cinema music, as the name subtly implies. This time around there are fourteen tracks, although three of them are re-releases from previous albums and one is a translation. Aside from a slight change of levels, I can’t find any difference on the three reused songs, although ”Kimi o Nosete” is still a great track and ”Shadows of Time”, while not being a movie song, is a great showcase of Sarah’s composing talents. ”Bring the snow”, the title theme of the upcoming Moomin movie, is the Japanese version this time and just as delightful as before. 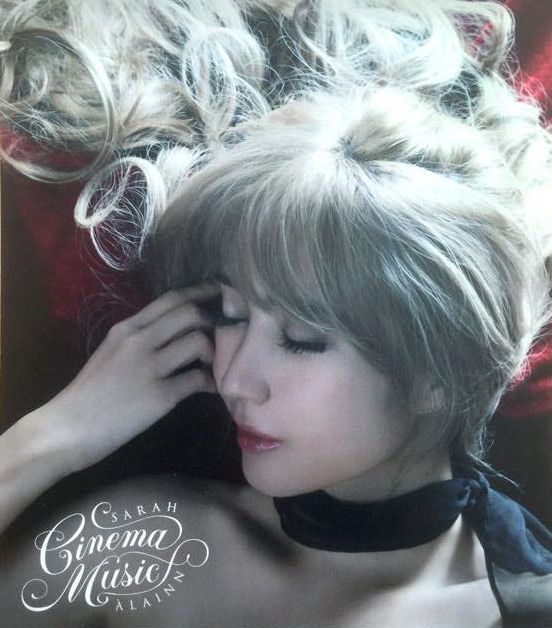 There are a few less interesting songs. ”Treize Jours en France” is a mostly forgettable chanson. ”Cinema Paradiso” in another rendition made me track down the movie, but the song is ultimately pretty slow. The instrumental violin waltz ”Por Una Cabeza” is a cool showcase once again, but not something I will actively listen to. Then there’s the 007 medley, which is a mix of some classic Bond themes with parts of ”Goldfinger” and ”Skyfall” vocals. It’s more notable for Sarah doing some atypically deep singing and some really impressive violin sections.

What I really wanted to hear was Sarah taking on the heavy-hitters. ”On My Own” is one of the most emotional themes of Les Miserables and was most famously performed by Lea Salonga, one of the greatest voices ever. Sarah sings it very dramatically with lots of musical flair. Her voice is more dynamic, but I think I prefer Lea’s more earnest rendition which only breaks up a little bit in the end. Sarah is almost sobbing halfway through. Maybe this was inspired more by the film version where Samantha Barks was notably more soggy than the original.

”Beauty and the Beast” is obviously topical with the new live action movie, but this is much closer to the original, even including Peabo Bryson in the duet. He still does a good job, although he does more unnecessary ”whoaoahohaoh”-ing in this version and brings Sarah along too. I certainly prefer Sarah’s voice to Celine’s and the arrangement is spectacular so the song is ultimately better, but it could have been even better with a bit more restraint.

Then finally there’s ”I Will Always Love You”, as made famous by Whitney Houston in Bodyguard. It’s notoriously hard to sing and I’m happy that Sarah mostly nails it. She doesn’t quite have Whitney’s depth and in a few spots she can’t effortlessly sink to the lowest ranges, but she belts out the powerful refrains without hesitation. Simply very good.

The surprises come from a few other songs. ”Now We Are Free”, the theme of Gladiator, is performed really well with impressive range. I wasn’t completely won over by La La Land, but the medley here is great. There’s parts of ”City of Stars”, ”Epilogue” and ”Another Day in the Sun”, with only a little singing on the former but once again more of Sarah’s deeper jazz voice. The standout of the album though is ”Nandemonaiya”, which despite the name is mostly an English version of the theme to the anime Your Name. It’s a really emotional piano ballad with a powerful last few verses.

Overall Cinema Music has some good tracks, but there are no amazing songs as on the three previous albums. Trying to imitate American power voices doesn’t really suit Sarah’s skills and I would prefer a return to a more celtic sound. Another collaboration with Yasunori Mitsuda would be awesome. A slight disappointment but still a good album to pick up. Sarah, F and Anima have more top class tracks though.