For years now, we’ve been seeing crossovers and various guest apperances in games. It’s not a new phenomenon, it’s been happening for ages in comics and sometimes also in movies (for example in Who Framed Roger Rabbit). Crossovers are often a good thing, it lets you meet your favourite characters in a new setting and see how they interact with unfamiliar faces. It can also, which is obviously one of the reasons for crossing over, make you interested in the other side which you might not have known before.

With the increase in crossovers lately, I felt that it would be interesting to visualize just how complex the web of crossovers has become, and also to make kind of a relation chart. In Hollywood terms, can you figure out a ”Kevin Bacon index” based on Mario? Or perhaps more fitting, on Ryu? It’s also interesting to see that practically every major franchise is somehow connected.

To make this anywhere near readable, I’ve set some limitations. Some links I simply left out, such as Final Fight and Darkstalkers also appearing in Namco x Capcom, and some redundant crossovers like Tekken x Street Fighter and SNK vs Capcom. I’m only listing crossovers happening between series – some series like Final Fantasy have their own internal crossovers as well. I’m not listing crossovers happening in other mediums, like Civil War in Marvel Comics. There is also a definition of what it takes for a game to have a crossover: a character or creature from a game must appear in another game ”in person”. Mentions, artwork, unlockable costumes or other minor tributes don’t count, or Little Big Planet would crossover with everything. However, the characters may appear in another form, like Liquid Snake appears as a cardboard character in Little Big Planet.

This chart is created basically off hand and looking up character lists on Wikipedia. There are bound to be countless additions or corrections to be made, and it will be updated as more games are added (The most recent link between Metroid and Dead or Alive needs to be confirmed, for example). What I would really like is some way to link Half-Life (and thus the indie games) to some other series. So, what do you think? 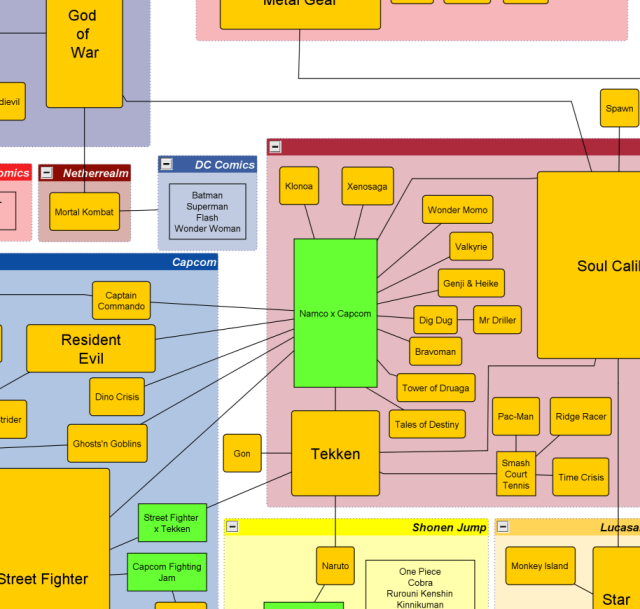