I was ordering some random pieces off Bricklink and as usual I looked at the available sets to see if there’s anything worth getting. One set caught my eye, in more ways than one. It’s called ”Paprika and the Mischievous Monkey”, and a quick glance can tell you this is not a common set. It was rather cheap so I took a chance.

Belville was for many years Lego’s attempt to find a female audience. Unlike most themes it survived a stunning 15 years from 1994 to 2009, which also happens to be pretty much exactly the years I didn’t care about Lego. The unique selling point with Belville was that it was mostly a doll toy, with fairly large posable dolls roughly the size of their earlier Technic maxifigures. They came with the regular Barbie-styled environments and props, from what I can tell. While it was probably overall just a blip in the Lego history, the theme did introduce some special parts still in use today. 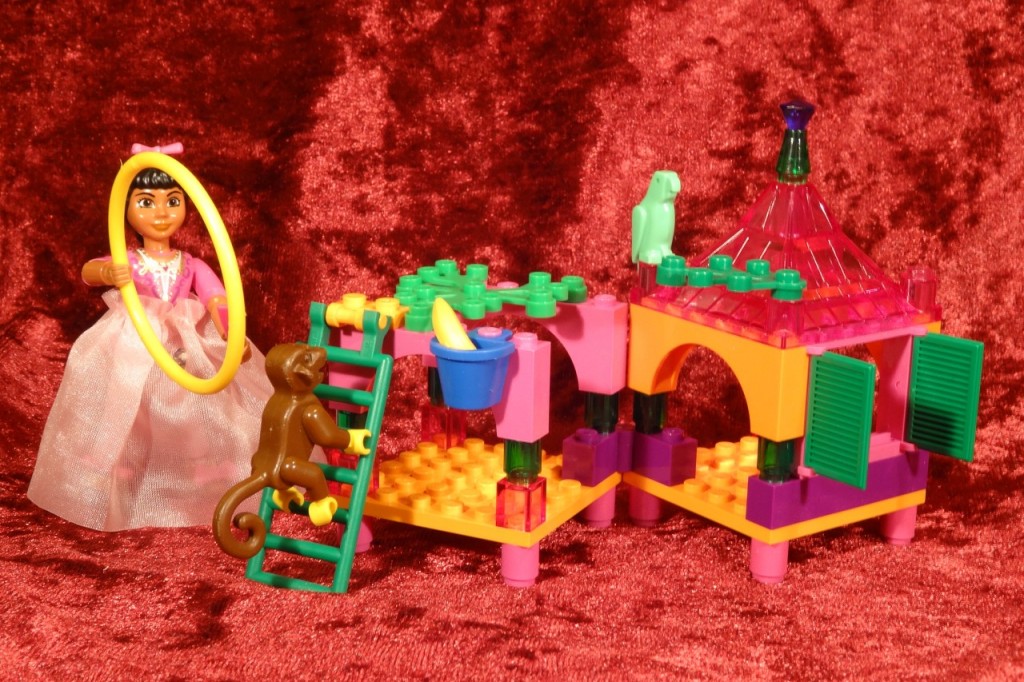 This particular set, however, belongs to a sub-theme called Golden Palace and was released in 2003. Apparently it’s vaguely Arabian Nights-themed with lots of domes and lounges and curtains and stuff. I’m assuming this was one of the smaller ones. Paprika is the girl and apparently a princess, with huge staring eyes and a bulky cloth skirt. She is also completely covered with ribbons, which I thought were originally created for Friends.

The main build is some kind of play-area/house for the monkey, which is a regular monkey from the 80’s Pirates sets. And here it gets really crazy. While the pieces themselves are normal, the colours are anything but. Hot orange, transparent purple and green, dark pink, bright green and some dark purple pieces too. Basically all that’s normal is the monkey, the banana and the foliage. It’s the kind of colour scheme I thought died in 1993, and it’s almost actively offensive to the eyes. I will keep the pieces for the occasional splash of colour (some combinations only ever existed in this set), but I can’t stand seeing this much longer.

It’s also interesting to note how the Belville theme was rather insulting to the audience. The builds (from what I’ve seen) are mostly made up of huge chunks of walls and roofs, and since it’s in those garish colours and with much bigger figures, it’s not easily compatible with regular Lego. The company made a new attempt in recent years with Friends, which is much more successful. While there is still a focus on dolls (which, however, are roughly the same scale as minifigs) and dressing up with all those ribbons, the builds themselves are pretty damn good. There’s still pink and bright colour, but also much more normal situations. There might be a lot of pet salons and hairdressers and such, but also sets where the figures are doing science, are magicians or pop artists, play football or even do karate. Much less insulting, I’d say.