As I mentioned recently upon completing the modular building Green Grocer, these things can get pretty addictive. The series, which started in 2007, is in a class of its own in terms of quality and detail. All of them come together to form a coherent street full of vibrant detail, so you’d naturally want to have them all. Luckily, Lego only releases one per year and luckily for me I simply can’t fit all of them in my shelf. Since I’m building the street along the top of my Ikea shelves, there’s a very small clearance. I had to shorten Fire Brigade and Grand Emporium to put them there, and Green Grocer very barely made it. That means I can happily skip Town Hall (which is entirely too tall) and Café Corner and Palace Cinema (which would need to have their prominent corners neutered).

However, there is another, a quite special modular. In 2007, along with the first modular Café Corner, Market Street was released under the Lego Factory banner. Factory was a short-lived series which allowed fans to build their own designs in Lego Digital Designer (a tool which is still around) and order all the pieces required. The best and most popular designs would then be produced by Lego themselves, as kind of a precursor to the Cuusoo program. Most of Factory was unremarkable, but Market Street went on to a legendary status, because of its semi-official status as a modular.

Right now I can’t figure out whether Market Street was designed before Café Corner (thus inspiring the entire series) or after it as a response. Lego had a lot of fan input on Café Corner either way, and there was a demand for a modular-type city series. The main design was created by Lego fan Erik Brok from the Netherlands, and indeed is very typical of Dutch classical houses, judging from a quick image search. The high front of the building features plenty of decorations, the stepped roof and the iron anchors holding it together. While I feel that the medium blue is a little too bright and would have preferred a sand blue, it’s still a pretty building. 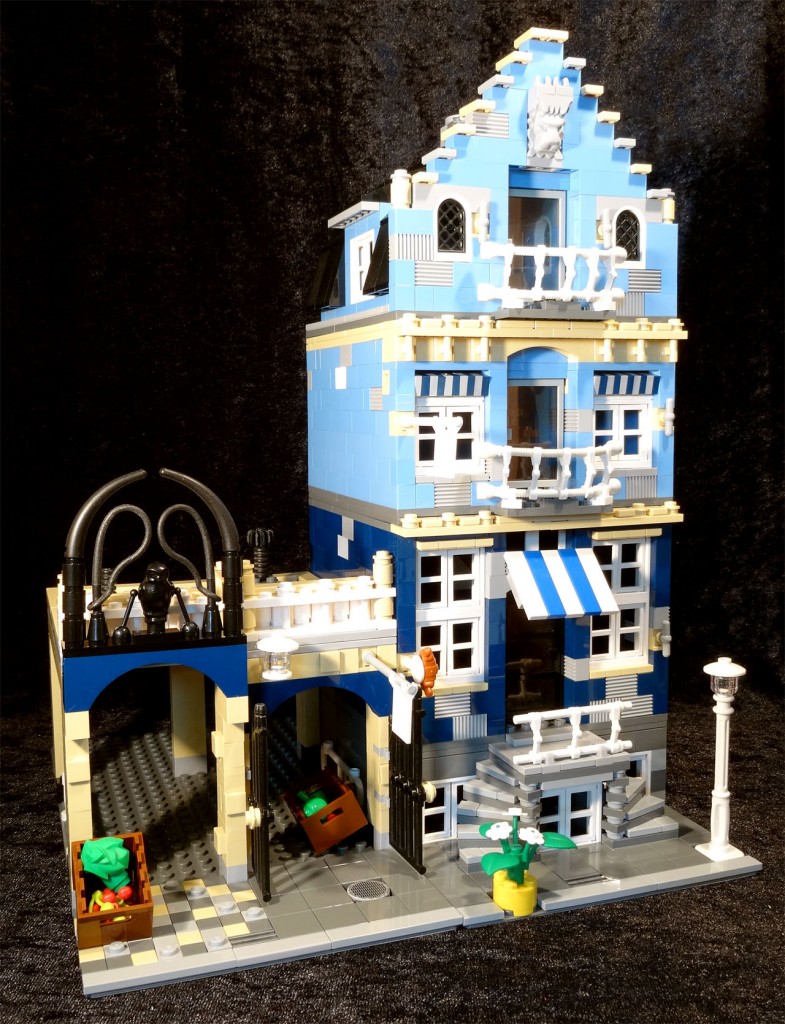 Compared to later modulars though, there really isn’t much happening. The four floors are basically four 16×16 squares of varying height. There are some interesting designs on the front. The stairs are very cleverly done, and the windows are offset half a brick into the wall, but apart from that it’s very simple. Since this building predates the new brick texture, eh… brick, grooved bricks are used to provide some worn texture to the outside. Apart from walled-up windows on the back, there’s very little to see. The single chair on the terrace is all the furniture you get. Speaking of the terrace, I would also like to point out that there are some modular flaws in this building. It pretty much has to stand first in the row with the market street part to the right, or the terrace will be blocked off by the next building. While you can rotate all floors individually, this breaks the design of the front. 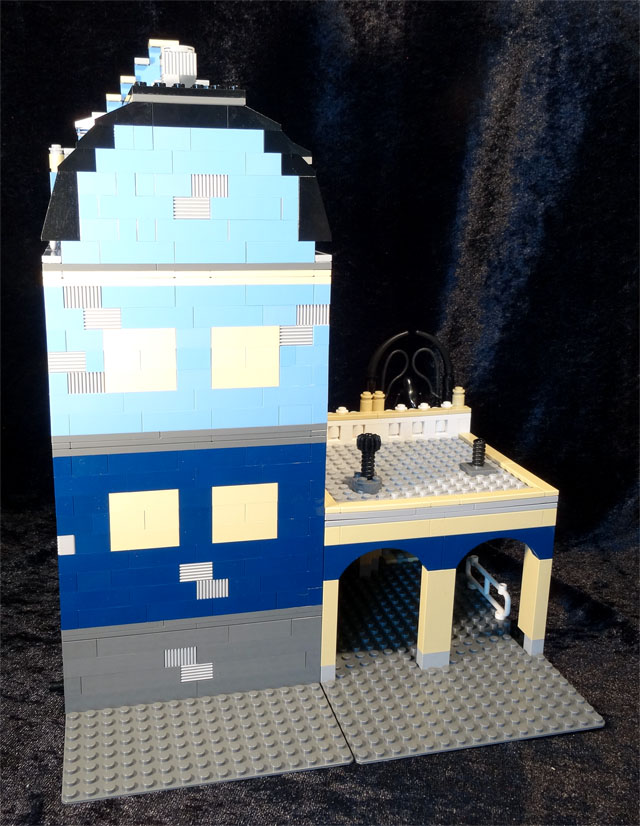 Just like Pet Shop, Market Street is divided into two separate parts. The market street part is a lower section which stretches inwards and suggests an alley filled with sellers, but there’s really very little there. The front uses some clever pieces to create a complex design, but otherwise it’s a simple build. Worthy of note is the cabbage or whatever it’s supposed to be: it’s originally the hairpiece of a figure from the hilariously stupid Exo-Force series, which tried to make xtreeeeme manga warriors in giant robots, while still sticking to the Lego molds. Needless to say, it looks like shit. Instead of tracking down the hair separately I bought one of the figures and it’s quite horrible. 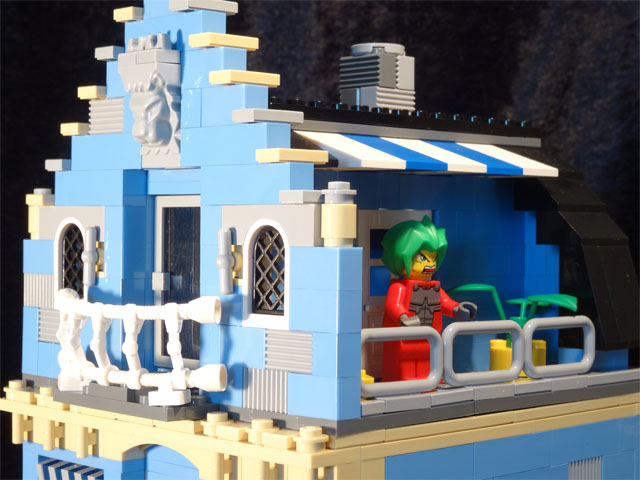 ”I will show you my true power… and my hair is a vegetable!”

Now, you can’t just buy Market Street. At least not easily. It used to be a Shop@Home exclusive in a much smaller AFOL market seven years ago, so there are very few sets out there. Complete sets start at about 500€, add another 100€ if you want the box, and prepare to pay 1200€ and up for a sealed copy. While I wanted it, I didn’t want it that much. However, I did have a bunch of medium blue laying around, after taking apart Seaside House and replacing the colour in Medieval Market Village. I also had some gates from a Castle set, a spare lion head from Chima, and various other bits and pieces. Looking through the inventory, I found a few hundred pieces to start out with. However, there were a few bumps along the way.

Out of the roughly 1200 pieces, I could actually buy half from Lego themselves. This included the 79 dark blue 1×4 bricks, which tend to be overpriced on Bricklink. While it takes a while to ship, the Pick a Brick service is excellent and in some cases just the same prices as dealing with individual sellers, without the hassle of ordering enough of some pieces to qualify. However, since the set is pretty old there are some parts you need to reconsider.

* The black door with three panes is rare, especially if you want a brand new one. But it’s also quite important to the look.
* The Technic ribbed hose used for the ventilation is rare but not expensive. If you want to limit your number of orders, you can order a longer one and cut it down to size – it doesn’t seem like a specific mold for each length so I feel this is kind of legit.
* The black owl is, surprisingly, not rare. Then again it was in a ton of Harry Potter sets including two tiny ones.
* The cabbage hair is easier to find attached to the Takeshi figure for quite the same price, and you get spare body parts to use.
* The dark blue arch used to be really rare but was put in production again for the 2013 winter set. It’s still rather costly but you can get the five ones needed without any trouble. However, I’d argue that it’s not really needed, the dark blue doesn’t really fit the street so you could easily replace it with tan ones. I guess it ties it together with the building a bit, but if you make it more neutral you could place this section anywhere in your street.
* The smaller grey doors are expensive, especially the right one. It might be worth the effort to simply buy a set that includes them both for not much more, especially if you can use the rest of the parts: the Spongebob set Krusty Krab. I went for the slightly cheaper old grey ones but apparently the seller sent me a right one instead of left. It doesn’t make much of a difference either way, you could say that using two of the same makes for a more unified look.
* Cherries are, for some strange reason, rather pricy.
* The four white hoses used for the balconies are infamous. Each one will cost you 10€ and up, if you want to get them from a single seller. There are options though. The older version can be had for 1/7 of the price. If you can’t find a seller with all four, look for the old set Viking Voyager. However, note that sellers sometimes strip the hoses to sell separately. If you want to farm sets for the real hose, you need the Bionicle Krekka or, allegedly, the old Alien Fossilizer set, but I doubt that this early set had the new variation of the mold. Another option, which might end up looking better, is simply using black pieces instead of white for the balconies.
* Finally, the 10 train windows can be really expensive. However, functionally you get a better look with any modern 1x4x3 window since they use the opening window panes anyway. Like the texture bricks, it’s a case of newer parts working out much better than what was used in this set.
* Minifigures are of course expensive as a whole, but if you want them you can piece together loose parts instead.

Since the parts count isn’t that great, completing at least a fairly good representation of Market Street isn’t that expensive. For me, the Bricklink orders came to about 150€ including shipping from six sellers (400 pieces). About 60€ for the 600 pieces from Lego, and then some of my spare parts completed the set. Obviously I’m missing the minifigures, the box and the instructions, and there are some substitutions, but I’m also about 390€ short of what a real one would cost. 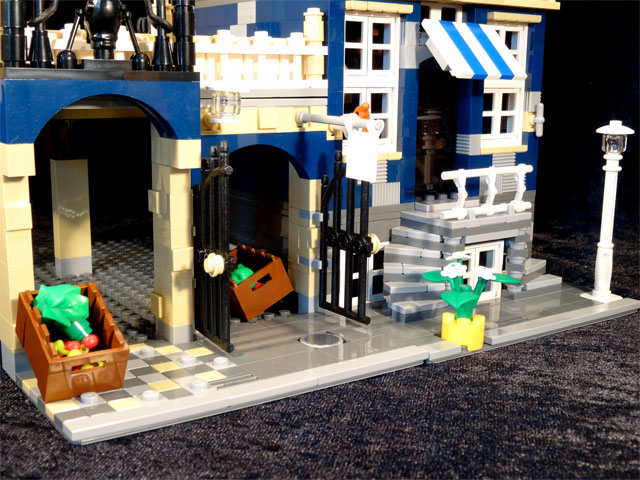 So, was it all worth it? Weeeelll… unlike Imperal Flagship and Green Grocer I didn’t feel a pressing need to get this. It was more a case of ”why not?” when I looked at all my spare medium blue. While the building has a few fancy details and some interesting construction, it’s mostly a case of stacking walls until you get to the top. Any experienced modular builder will be fairly disappointed. In terms of complexity, I’d say it’s around the same as the newer Creator houses. However, it’s still a pretty building and it breaks off the silhouette of the street, just like Parisian Restaurant. If you can piece it together for a reasonable price, I’d say go for it. But there’s no, no way it’s worth what you need to pay for a sealed box.