I’m not New Elementary, because they’re awesome, but I share their enjoyment of new Lego parts. And the latest Collectible Minifigure series certainly brings a lot of that. I purchased a full box which was delivered way ahead of schedule, so let’s take the opportunity to check out all the figures. Let me stress that I’m a very casual Harry Potter fan who only saw the movies once, so I’m not completely caught up on every nuance and I might be missing some references. 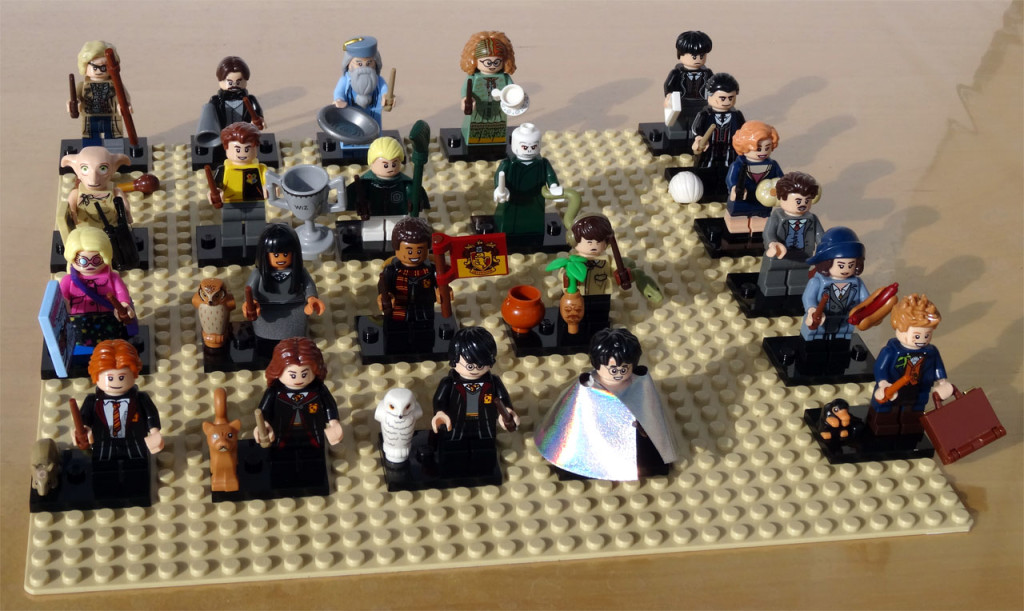 Let’s start from the back row with the teaching staff. Alastor ”Mad-Eye” Moody was a stand-out character to me, but his only previous figure was a disaster. Lego basically lost their marbles with figure design around roughly 1995 and didn’t really get their iconic design locked in until 2010 or so. The new one is brilliant with tons of detail, although it has a silver leg instead of the specific peg leg. He also comes with a secondary face and hairpiece for that other guy who impersonated him. There’s also a repainted maracas part used as a bottle. I believe his hair is also new, or at least very recent.

The second professor is Filius Flitwick, another of Warwick Davies’ many Lego representations. I know very little of the character, but this is a very dapper figure complete with bowtie and coat tails. His hairpiece is new, as is the megaphone. While Flitwick isn’t an extremely important character in the movies, he was only released once before. His parts are also very reusable for any formal occasion, so you might want to stock up on him.

Then there’s Albus Dumbledore, who has had quite a few different versions before, but not really any good ones. This year we get both Harris’ red-robed Dumbledore in the Great Hall set and Gambon’s version here. You’d think that Lego would go for a parts reuse when they already had a tied beard for Vitruvius: ”FINALLY another hippie wizard we can use this for”. But no, both that and the hat are obviously new. Dumbledore also has one of the new dress legs parts, which replaces the old standard slope. Since this has longer pegs, it’s just as secure as the standard legs and it’s also the same height. Also note that the 3×3 dish comes in flat silver for the first time and has a swirly print inside. 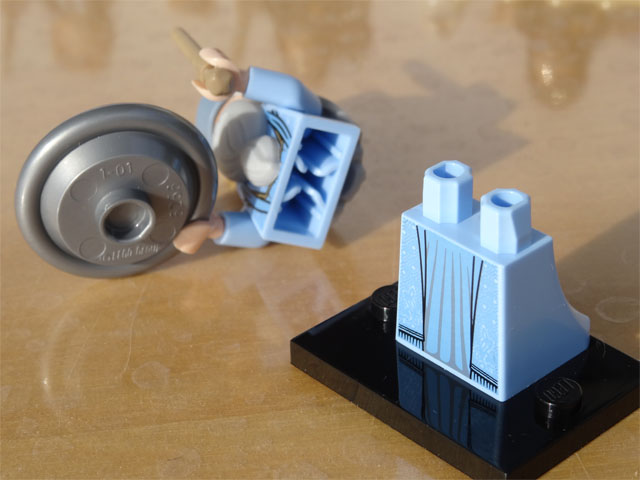 The final professor is Sybil Trelawney. She has great printing as the rest and a new cool hairpiece that includes her bandana. What’s most spectacular though is a new teacup with a separate dish. Like the recent rice bowl, these are parts that must be used outside of collectible figures so we can amass tons of them.

Going through the supporting characters, we have Dobby. He’s had two figures before and I kind of prefer the previous one in terms of the face. This is a little too cheery, but then again he just got his sock. He also comes with a printed book cover and has dual printed legs but otherwise is an unremarkable character.

Speaking of unremarkable, Cedric Diggory. The comically oversized Triwizard trophy is his only specific accessory. His face and hair are neat enough and he can help fill out the Quidditch set, but otherwise he’s fairly useless.

I’m also not a huge fan of Draco Malfoy, making us hate bratty blondes before Joffrey was a thing. They went with his Quidditch outfit here which also is an addition to the separate set, but in his short legs he comes across as the younger version rather than the teenaged heroes in this collection. The green broom is new, which is something.

Voldemort is by design a very simple character and he recently had a re-release as the Lego Dimensions figure. This figure uses dark green clothes with black creases rather than the other way around, and he has nostrils, which is kind of funny with the guy with no nose having the most nose as a Lego figure. His white wand is unique amongst this collection and he comes with a brand new snake mold representing his horcrux Nagini. Speaking of wands, pretty much everyone gets one and they come on sprues of two, so you quickly get a ton of spares. They also come in black, dark brown, reddish brown, dark tan and dark orange, so there’s already potential for lots of detail use. They are also molded to be held either upright or pointing forward, which is very good for posing. 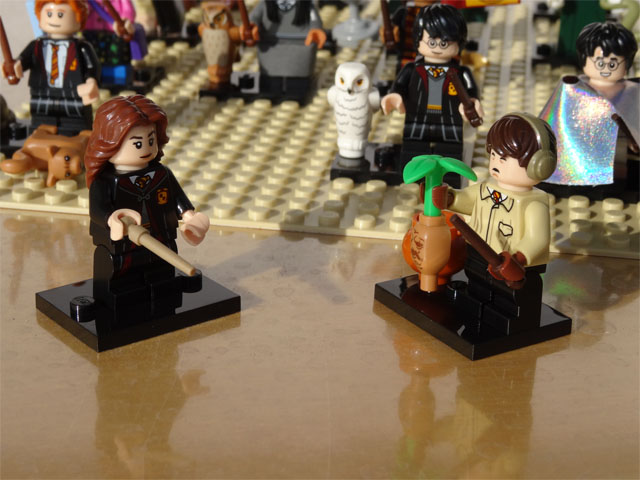 We’ve still got half of the Potter cast to get through plus the Fantastic Beasts group, so let’s get cracking. Luna Lovegood is a very welcome figure, as her previous version was only in one expensive set and consequently cost around $20 on a good day. This is a straight update, with a new hairpiece which allows for her to carry a shoulder bag, dual sided head with both her Spectrespecs and a standard face, a cloth skirt and a printed Quibbler magazine. She’s one of my favourite characters so I’m glad I never got crazy enough to pay for the original.

Cho Chang is another welcome addition as she didn’t have a figure before. She comes with a nice face, the first Ravenclaw styled torso (which is also gender neutral) and her light brown owl. Since I liked Cho well enough and have been wanting to collect a bunch of owls recently, I’m happy.

Dean Thomas also didn’t exist in Lego form before. He’s another figure who should go in the Quidditch set (but then again practically everyone was there) and his Gryffindor outfit with a scarf is very reusable.

The final supporting student is Neville Longbottom, here portrayed during the mandragora class. That makes him extremely specific, but also gives us brand new parts! The ear protectors are reused from previous figures, but the stalk and the root of the mandrake plant are very useful parts that will absolutely be reused in the future. Both ends of the stalk and the bottom of the root take the Friends style flowers and any other small pegs.

Ron Weasley is a bit older here and loosens up his uniform a bit. He comes with his pet rat, which has a new mold used for the 2018 sets. Him using the new Han Solo hairpiece is also an inspired choice. I never cared much for him but this figure captures his iconic design so well that he has to stick around somewhere in my city.

Hermione Granger isn’t quite as iconic, as we’ve had a number of pretty brunettes portrayed in Lego and she doesn’t really bring anything new. I think she’ll replace my previous version of the character though.

And then there’s Harry Potter himself. This is an excellent teenaged rendition, well dressed and not just in the shirt and pullover but also the cloak. Unlike the other 2018 Potters, he has longer hair which covers his scar, but he looks really iconic. He also comes with Hedwig.

And then … another Potter. It’s funny how slightly bigger glasses instantly makes him look younger, and he wears his pyjamas and the unique invisibility cloak, here made in a really shiny material that Lego previously used for highlights on cloaks. The inside has a really nice print. 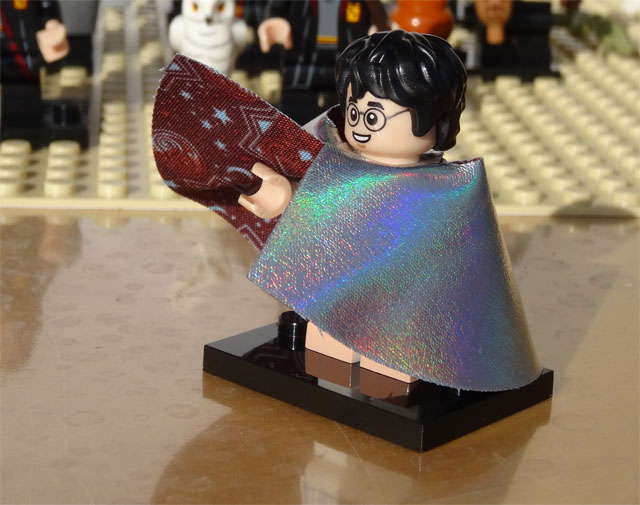 Before I go into the other cast, let’s adress another brand new part. Lego has finally created bendable shorter legs, sort of. These new ones are a plate shorter than the regular legs so they still are taller, but make for a good teenage size while the old style can still be used for kids or really short characters. Luna, Cho, Dean, Neville, Ron, Hermione and older Harry all come with these, so there’s some variety even though most are black and printed. 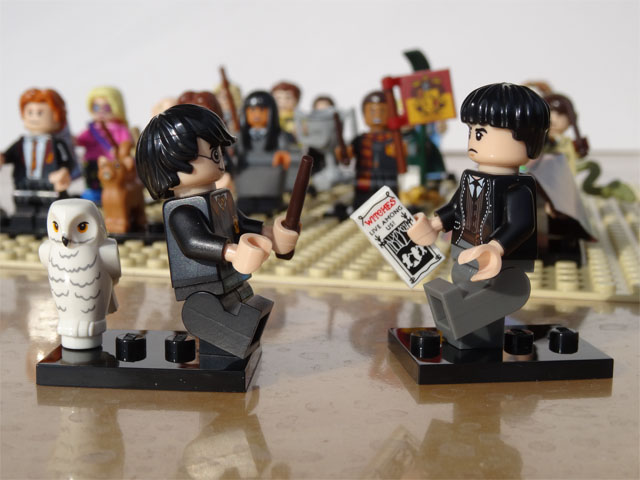 The Fantastic Beasts and Where To Find Them cast begins with Creedence Barebone, who was important to the first movie but hardly very interesting. I doubt he’s going to be in a set so it’s nice to get him here if nothing else.

The same can be said for Percival Graves, but he’s the much more interesting character. Actually, he’s two. Like Mad-Eye, he comes with a spare hairpiece and a reversible head to become Grindelwald. He looks way too somber here though, compared to Depp’s fairly manic portrayal. Graves would be a fairly collectible if unremarkable figure if Lego didn’t use him as a chase figure, just as they did with the Classic Policeman in the last series. It’s a shitty move overall, since you can’t get even two complete sets of figures out of a full box and Graves will be highly sought after and fought for. Hey, Lego. Don’t be assholes, okay? 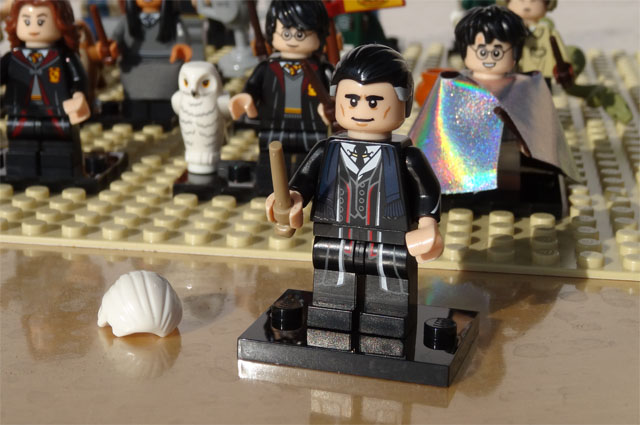 Moving on, Queenie Goldstein is a brand new character with a brand new strudel part which will certainly help add variation to bakery MOC:s. She has a very expressive face and looks good, although the overlapping print with the dual molded legs are a bit messy. She could have used an actual skirt part.

Similarly, Jacob Kowalski is a new character who also carries a new briefcase mold. His parts are very reusable and he comes with new cookie prints, so even if you don’t care for the character he makes for a nice little parts pack.

Tina Goldstein was in Lego Dimensions so she’s not entirely new, but completely remade. Her hat is now dark blue and her clothes are sand blue, and the prints are all new too. She has more distinct eyebrows and looks cuter this time.

Finally (phew!), Newt Scamander is also a remade Lego Dimensions figure, but he’s mostly the same, just with more intense colours. He also carries the stick insect in his pocket and comes with a new molded Niffler and another briefcase.

Overall, this series has more figures than ever before and if it hadn’t been for the Graves situation, it would have been a fantastic way to complete the Potterverse collection with figures you wouldn’t normally get in sets. Now there’s a slight annoyance that takes away from the joy of great figures like all the professors, Luna and the main trio. There are few characters I don’t care for at all, and I’ll probably keep most of them around. When it comes to Graves, it’s a question of how much I want to have a Colin Farrell figure. 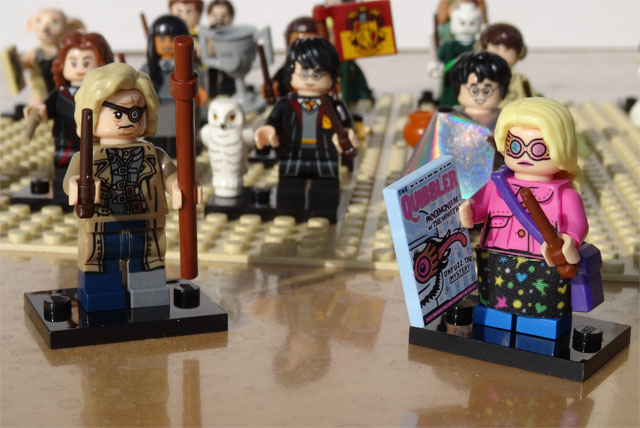