One of the big injustices in the Lego world is that we never got an official release of the Balrog of Moria. This was the iconic scene of the first movie and indeed of the first book, and even though Lego doesn’t really do big freaking demons, it’s not like the Balrog is actually Satanic or anything. He’s just a huge burning pile of awesome. To make matters worse, the Lego Lord of the Rings game obviously included the Balrog. It was right there, constructed out of Lego bricks! Why not produce it? Why, Lego, why?

Well, in hindsight, there are plenty of reasons. The in-game Balrog was built out of a mix of, as it were, parts that were, parts that are, and parts that yet may be. Most notably, the jaws (from the head of the Fenris Wolf) and the feet were both from discontinued themes, and only the former came in black to begin with. The horns were a combination of a curved piece (only in chrome silver) and the horns of a Taun-Taun (!) which only came in tan. Then there was the wings, which have been available in a couple of colours including a decent red with black edges, but were only made in black recently for the Minecraft Nether Dragon. Then there’s the rocky textured plates on his back, which never were released in black but eventually came in a perfect transparent orange with black highlights in Nexo Knights in 2016. Finally, the build uses custom cloth pieces for the outer wings.

Nevertheless, this wouldn’t have stopped Lego. They can produce parts as they feel like it. So why didn’t they? When Lego Dimensions was released, the balrog showed up again, in a slightly more controllable environment. After taking a huge amount of screenshots, I recreated the entire build in Lego Digital Designer. From there, it was the standard procedure of finding the equivalent parts in Bricklink to try to build a replica. Already at this stage I decided that the horns couldn’t be done. Theoretically I could have spray painted the parts for the right look, but all those parts are horribly expensive to begin with, so I started doing some fixes already. I designed replicas of the cloth pieces and printed them on black stiff paper which does the job fine.

However, when the parts showed up I found out the real reason why the Balrog, as seen in the game, was never produced. It simply doesn’t work when built from actual parts. The result was a floppy mess that could hardly stand up, with wings dragging the ground and parts breaking off everywhere. Clearly, I had some work ahead of me to get an ”official” Balrog that actually stood up. 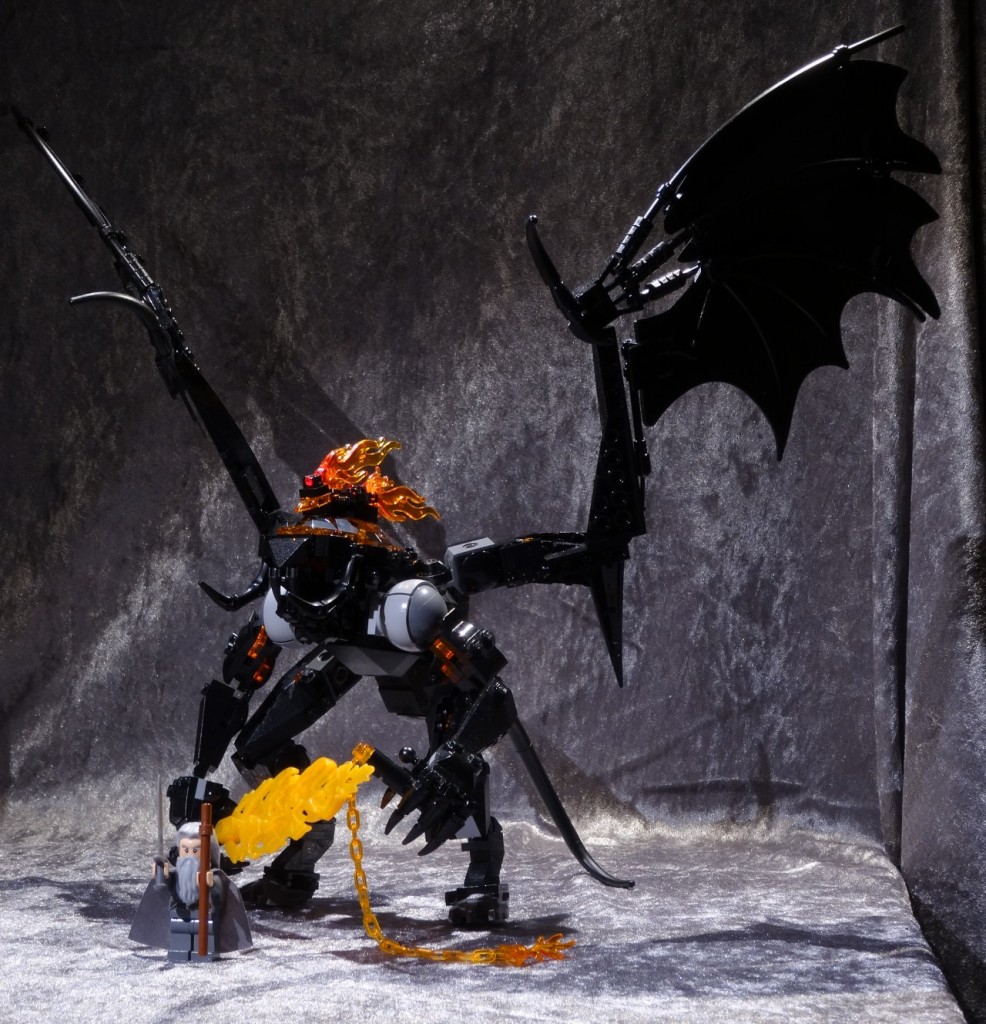 Torso:
One of the hardest things to figure out was the jaw piece, since it hinges from a very small section and there is no half cross axle Technic pin to hold it any other way. Using a full 2L axle made it rather slackjawed, so I had to rearrange some things. The ”waist” rotation joint had to go. There was a very suitable space for a joint and all parts lined up, but it’s just too top-heavy to work. Then there were the connections for wings and legs. Those were only 1×2 bricks with Technic holes, but that provided exactly no friction for such heavy parts. An attempt with ball joints for the wings also failed. Eventually I settled for ratcheted click joints for both. The horns, finally, were replaced with Chima spider legs. They don’t achieve the same double curves, but look great anyway.

Arms:
The arms were mostly fine. One major problem is that they are mounted on big ”turret” balljoints with low friction, which aren’t available in black either. But they add such a big part of the muscled look to the thing that I couldn’t find a good replacement. I added Samurai Mech-style Technic plates to the palms to be able to add weapons. The transparent orange chain from Nexo Knights made a good whip (no, Lego, you can’t build one from consecutive flame pieces), and I found an old, super rare orange Bionicle flame sword to arm him with.

Legs:
The legs are, from a structural standpoint, just silly. They’re really well designed and use a few inventive techniques to get rounded slopes on both sides of the legs… but this means the entire weight of the Balrog rests on a few studs. I had to add 1×3 plates to the ankles to even hold the pose, but the 2×2 jumpers that hold the feet don’t help the durability any. Rebuilding any of this would drastically change the shape of the legs, and using the tail as a tripod it does stand up, provided that you are careful with it.

Wings:
Making custom wing pieces was an interesting challenge, but the results worked out well. The wings are the most clever build on the Balrog and unlike the rest, they actually work in real life. The original dragon wings are connected to a rod while the finger joints hinge from a standard part. From these, pneumatic tubes are bent into shape around the wings and clipped into place. The part that took a lot of thinking was the small socket wrench (part # 11402e, usually comes with a bunch of other tools) which connects the dragon wing along with the other fingers. One change to the wings was removing the inner hinge which only made them sag. The remaining joint gives you two good looks: either spreading the wings wide or raising them. The wingtips simply don’t fit, so I removed them.

After all this, I had a Balrog which looked mostly like the in-game official version, but which doesn’t come apart when I breathe on it. It’s impressively big, rather posable and definitely menacing. I like it, and it was worth the effort of reverse engineering from the game.

So, what now? Well, I’m obviously going to put in on Lego Ideas like the nine inferior ones already there, and then spam every forum on the internet and hope that people will click enough so that Lego may produce it and give me money for something they designed in the first place, because that’s what Lego Ideas is for, right?

No, I’m going to give you the LDD files so you don’t have to go through the same trouble I did. It’s been four years and the world is full of poor Balrog replicas. I’m even going to give you the template for the wings, because that’s just how I roll. This compressed file includes the original, mostly game accurate but borked Balrog, my corrected, mostly working Balrog, and the PNG file for the wings (print on black paper and the lines should barely be visible for you to cut along). If you make this Balrog even better, feel free to add your version and redistribute the files.

The files are available here in a RAR archive.