When I visited Osaka this October, I wanted to benefit from staying in the entertainment district of Dotonbori and took a look at the local music venues. There were two very close by with performances on several of the days we were there, but ultimately we only went to see one: Chocol8 Syndrome. I knew nothing of them before, but after looking up their songs on Youtube I really wanted to see their show. We took a short walk to Music Club Janus and went up the escalators to find the band selling their merchandise. I wasn’t expecting that, but it’s fun to actually be able to interact with the musicians. I had managed to track down one of their albums at Book-Off and Shaon, the singer, was really happy that I already had it. Anyway, since it’s unlikely that I would get the chance again, I bought the other two as well and got them all autographed. Before long it was time for the band to get ready. 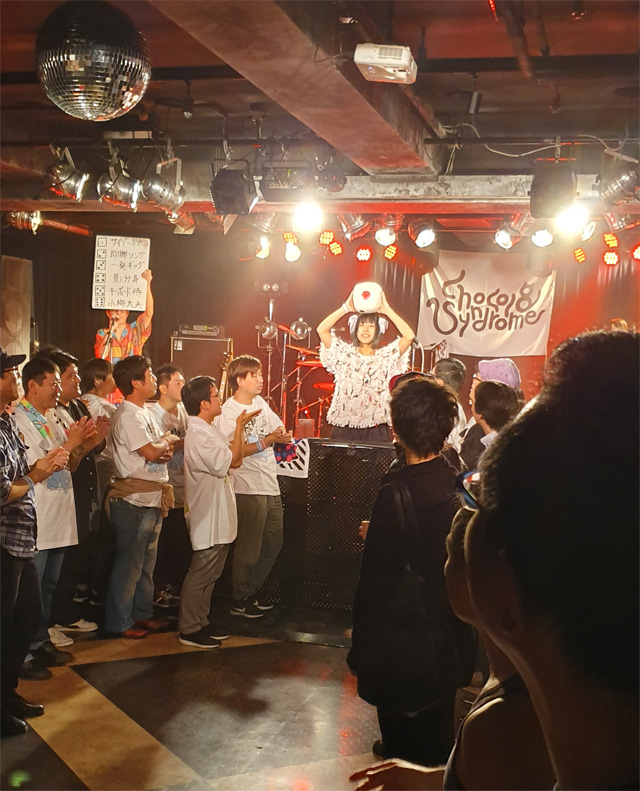 Except for the songs I had already listened to, I didn’t know what to expect. It turns out that the concert was pretty damn loud in that small venue. Luckily I wore ear protection. Overall, the show was fun and quite intimate. My Japanese is much too poor to really follow the stage banter, but I think they admonished the Osaka audience for not having sold out there, as a Tokyo band. They kept playing around with each other and the keyboard player (and backup vocalist) Kenkomobuchi appeared in increasingly silly outfits. Along with their song ”Dice Roll”, they also rolled a big fluffy dice into the crowd to see what to do next. Overall a bit surreal for a newcomer to Japanese music, but enjoyable still. I think their songs overall aren’t really strong enough for a mainstream breakout, but they are definitely skilled and have an interesting style.

Having returned home and slowly (and probably wrongly) translating the song names, I’ve been listening to all three albums: ”8”, ”Dappo Matatabi Rock” (also translated as ”Evasion of the Law Travel Rock”) and ”Ongaku wa Major ga Subete janai”. Each only has eight songs, but as it turns out there is a lot of really good music here.

The debut album ”8” is a really solid one. The initial three songs are all interesting and varied, although I think ”Sutorobo” (or ”Strobe”?) was responsible for them running really painful strobe lights on stage. Please, no. That song has a good drive to it, while ”Glass no Beat” has a great bass track and cool vocals. However, the best tracks are at the end. ”Navigator” is overall a fun and speedy song with great keyboard and bass tracks. I also appreciate the backup vocals here. Then there’s ”Adulty Shonen Shojo” (or ”Adulty Boys & Girls”) which is a cool, action packed duet for Shaon and Ken. The album closes out with the very … eccentric ”Tsuramaro no Kiwami”, which we will unfortunately hear more of.

On to ”Dappo Matatabi Rock”, which opens with ”Multiverse”, a pretty good pop song with a punky edge. Perhaps the voice is trying a bit too much to sound cool? An immediate contrast is ”Mystic Mysteria” which is a jazzy tune with great bass and a strong vocal performance. There’s nothing else really like it in their discography so far but I would like to see more like it. ”Sakura no Cho” is a nice ballad with a good arrangement, but Shaon’s voice breaks up a bit towards the end as it isn’t quite strong enough. However, the next song quickly recovers and ”Teen Girl no Yuutsu” (”Melancholy of Teen Girl”) is a really good pop song overall with an intense refrain. ”Tsuramaro no kiwami” returns but now as a enga (Japanese classical ballad) version and Shaon nails the style, but it’s still a very weird song and enga is quite horrible. ”Europa” is uneven with some of the verses and the light piano track being really good but the refrains are a bit generic. Finally, the album ends with ”Kimi to watashi to metamorphose” (”You, I and metamorphosis”), which is a really exciting and fun pop song. I think I like this album best.

Oh, Chocol8 Syndrome. Baby noises never make a song good. ”Ongaku no Major ga Subete janai” opens with ”Baby Dance” which is a pretty fun song with good refrain but it’s a bit repetitive. ”Miracle ni Romance” is another great song with a great keyboard tune which carries the vocals to a great refrain. The video was my first impression of the band and Shaon running around Shibuya at night was suitably indie and interesting for me to pay attention. The rest of the album isn’t as strong. ”Kono yo de ichiban taisetsu na mono” is a standout, with the song going into rock opera territory with some playful duet vocals. I also like ”Yume wa samenai mama” which is a slower song that better uses the singer’s strengths. The third version of ”Tsuramaro no Kiwami” is techno-ish and not much better than before. 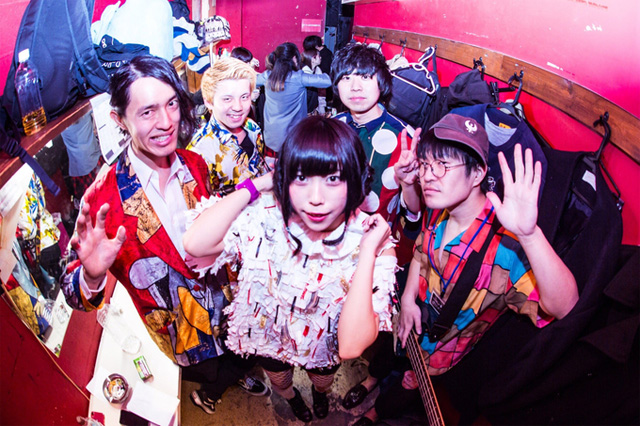 I enjoy these albums. Chocol8 Syndrome deserve some more attention, and their first two albums and a bunch of singles are available on Itunes. So you should check them out!