It seems like it was only yesterday that I bought Fire Brigade, as a sample of modern Lego and to see what everyone was raving about. Actually it was 2013. In four short years I’ve not only collected every new modular made since, I also pieced together the three that came before (and built eight of my own). I should be happy that I did it soon enough. Even Bricklinking a complete Green Grocer is now very expensive, and some parts of Café Corner and Market Street remain elusive, while Fire Brigade, Grand Emporium and Town Hall are steadily becoming more and more expensive. And just recently, Pet Shop finally went out of sale after almost six years, with Palace Cinema soon to follow. But I do have them all (even if Town Hall has been demolished) and so it’s fitting to get this anniversary celebration of ten years of modular buildings: Assembly Square. 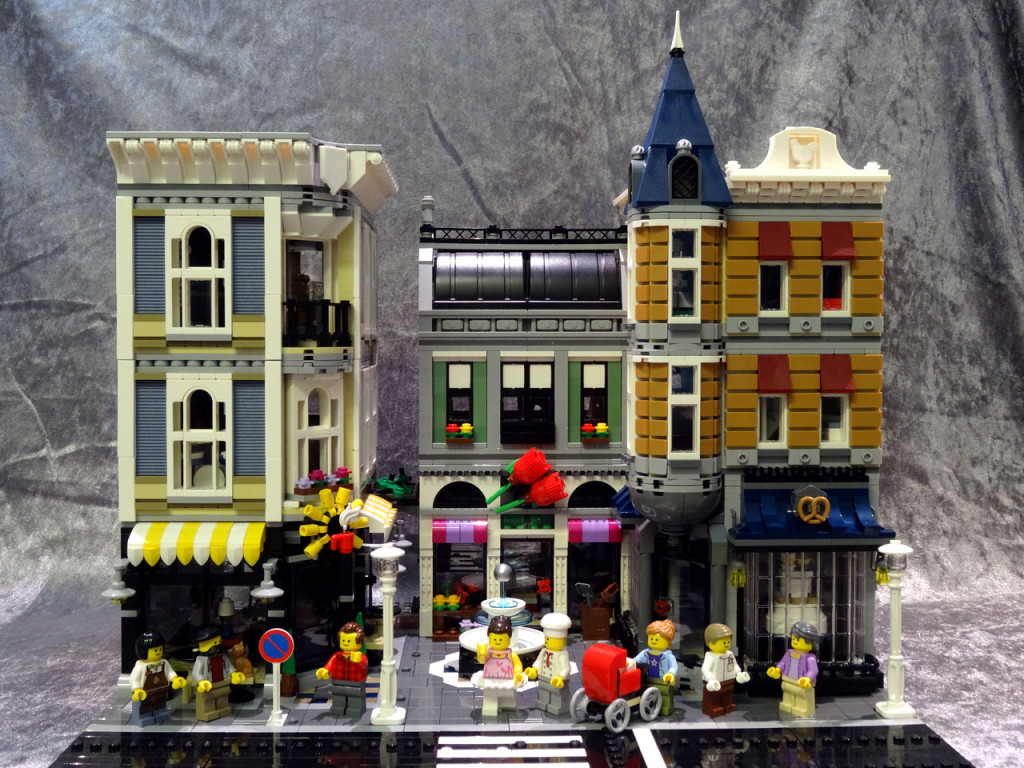 Let’s get the obvious out of the way. With a 32×48 footprint, Assembly Square is 50% bigger than the standard, and also has roughly 50% more pieces and the equivalent price. This makes it a pretty huge and expensive set, but still a very good value. Not only does it have over 4000 parts, many of those are brand new. While the designer Jamie Berard often takes the opportunity to introduce new or rare parts, this is extraordinary. I mean, look at this:

And then a bunch of other rare bits: ballerina skirt, mirror sheet, new parrot, the Disney Castle clock, baton, welding gear, saxophone, acoustic guitar and a chihuahua. Especially the tiles and the new side stud brick are extremely useful and it would almost be worth buying this set just to strip down into parts. The only downside is that the varied colours of the buildings mean that there isn’t very much of any specific colour, but it does include a bunch of sand blue and sand green, making sure those colours stay relevant for a few more years. However, you will want to build this, so let’s have a look at that. 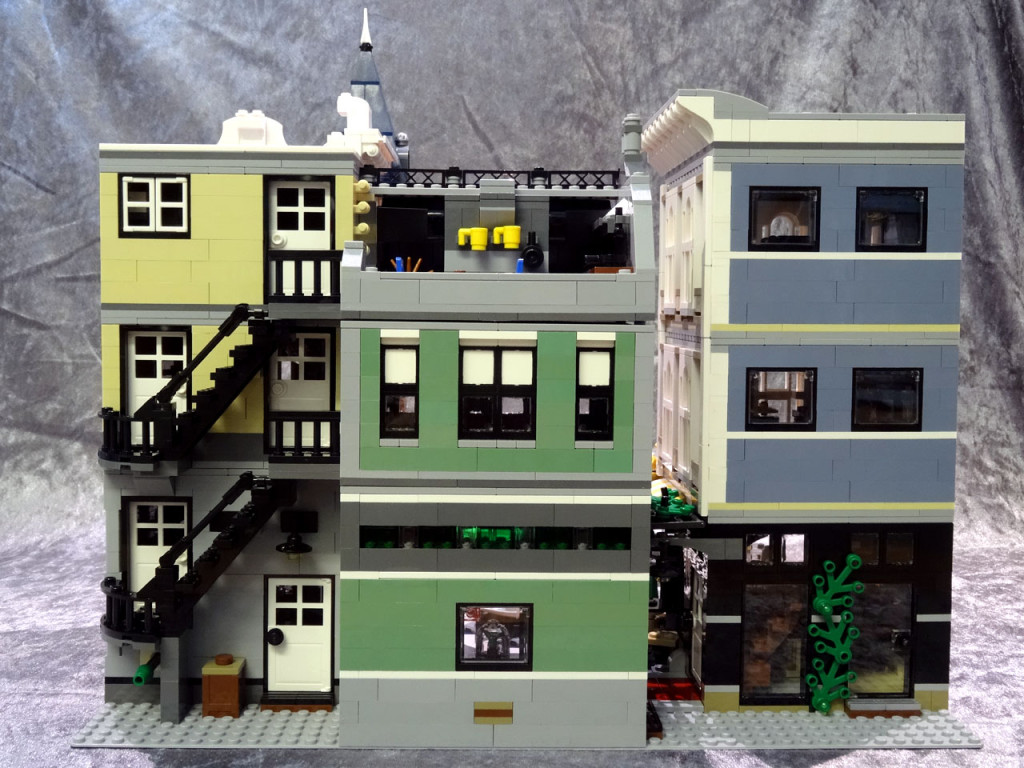 The set covers two baseplates, but since I wanted to include it in my city with a street in front, I went ahead and built it on a single 48×48 baseplate right away. The first steps cover a huge number of tiles that make up the sidewalk, the square and the ground floors of the three buildings. This shows off the new tiles to good effect. As usual I replaced a few tiles with jumpers to place figures on, and I also added the street and a vintage traffic sign. 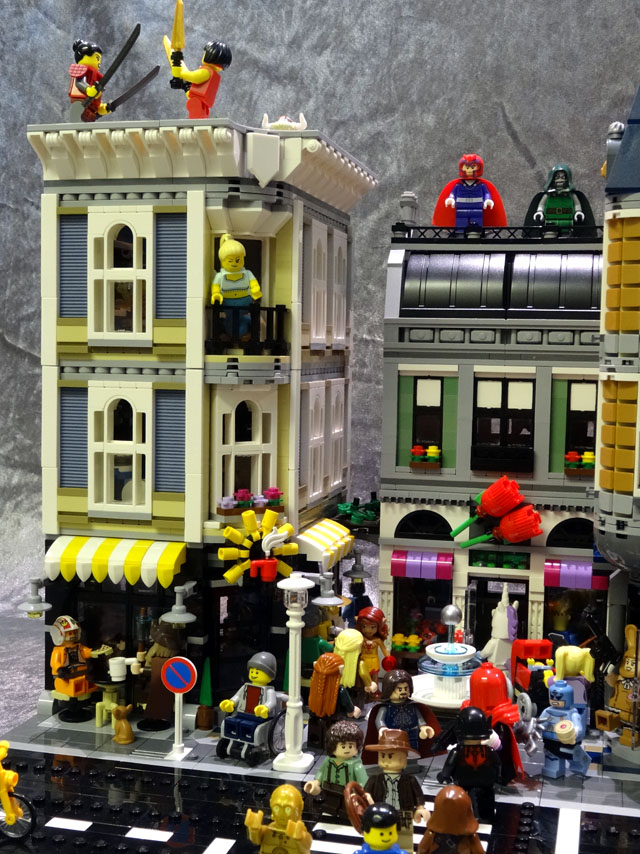 The left building is a throwback to Café Corner with the yellow/white awnings and tables, but it’s simpler and more clever, especially the sign over the door. Inside, we find a cozy café with a few seats and a cashier. A side door leads to the back, while a separate door takes us to stairs leading up from the outside. Going up, we find two mostly identical floors. The middle one has a music shop, although it’s pretty much a big room with a cash register and a few instruments. And the top floor has a piano and a mirror, and is supposed to be a dance studio, where it makes sense to leave it mostly open. This floor also has a tiny balcony. Jamie moments in this house include the palisade parts used to give a tiny bit extra space for the fez parts to be mounted as lamps, and a simple solution for the corner facade. I like how he used the new corner door and the rotated, complex solution to show how you can do it either way. 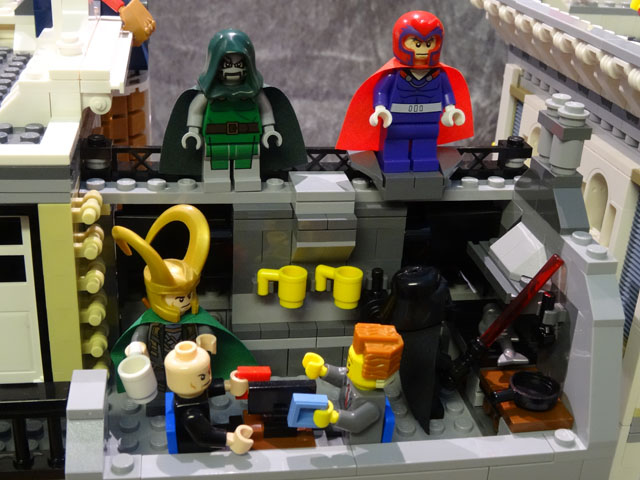 The other two buildings are interconnected (and indeed you need to pass through the right one to get to the upper floors of the middle one), but let’s look at the flower shop. The front is fairly simple but looks good enough. Inside you find the flower shop, which includes a clever way to hang flowers on a rack. The large sign outside is also nice. The middle floor confused me for a while as you build what looks like half a skateboard ramp. But it turns out to be a photography backdrop in a studio. The camera is a classic, gigantic model on a tripod which fits on clips in the floor in another Jamie moment. Then you get up top, which is an outdoors cooking area which is a little strange, but obviously works well for barbecue and playing Switch. The front includes more Jamie moments, as a row of Mjolnir hammers are used for detail while the roof itself is two Technic shovels! 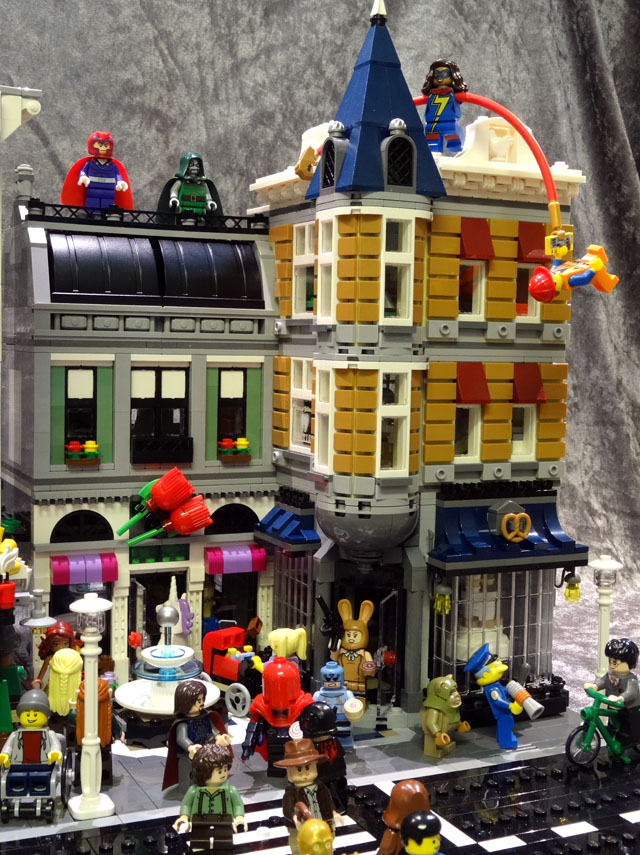 The bakery has the most interesting design. Most of the ground floor has windows which are made with sliding garage door parts, but these are firmly mounted using an extremely clever technique. Another Jamie moment is seeing the welding gear being used as lamp holders! Inside, we find a well equipped bakery shop with lots of cakes, pastries and a huge wedding cake in the window. There’s also a small oven, over which there are stairs that lead outside. Following this, we enter the dentist’s office on the middle floor. It’s fairly cramped, but still has a waiting seat, a small reception desk and the dentist chair with all necessary equipment. Somewhat threateningly, the equipment includes a baton and huge tongs.

And then we go to the top floor, which houses a huge surprise and a very nice tribute to all us adult collectors. There is a fully equipped apartment with a toilet, a kitchenette and a really clever folding sofa/bed. But here lives a Lego collector, and she owns a bunch of miniature of recognizable sets, like the Horizon Express, the VW Camper, the Mini Cooper, the Eiffel Tower, and the Café Corner, Market Street and Green Grocer all lined up on a shelf. There’s even a special, unique printed tile in the form of the Café Corner box. Really, Lego, you shouldn’t have. It’s all too much. And this is ignoring the great detail on the outside. The entire wall is tiled, which is hugely repetitive but looks awesome. The final Jamie moment is the bottom of the bartizan: the rounded parts are mounted upside down using those new stamp parts, which is just ridiculously smart.

However, it’s not without a big dose of deja vu. And I’m not just talking about the prevalent nods to earlier builds. I feel like I’ve done most of this before, which might be an unavoidable consequence of making a big bunch of my own custom buildings. I had a music shop and a dentist in Llewellyn’s Jewelry. I toyed with making an AFOL apartment before I decided on a pottery on top of my own flower shop in Pizza Plaza. I made a bakery in Tea Garden Café, and both that and my own Café Corner interior had similar areas. I’m not saying that Lego copied me (obviously), but there’s not that many of these suitable shop types left. 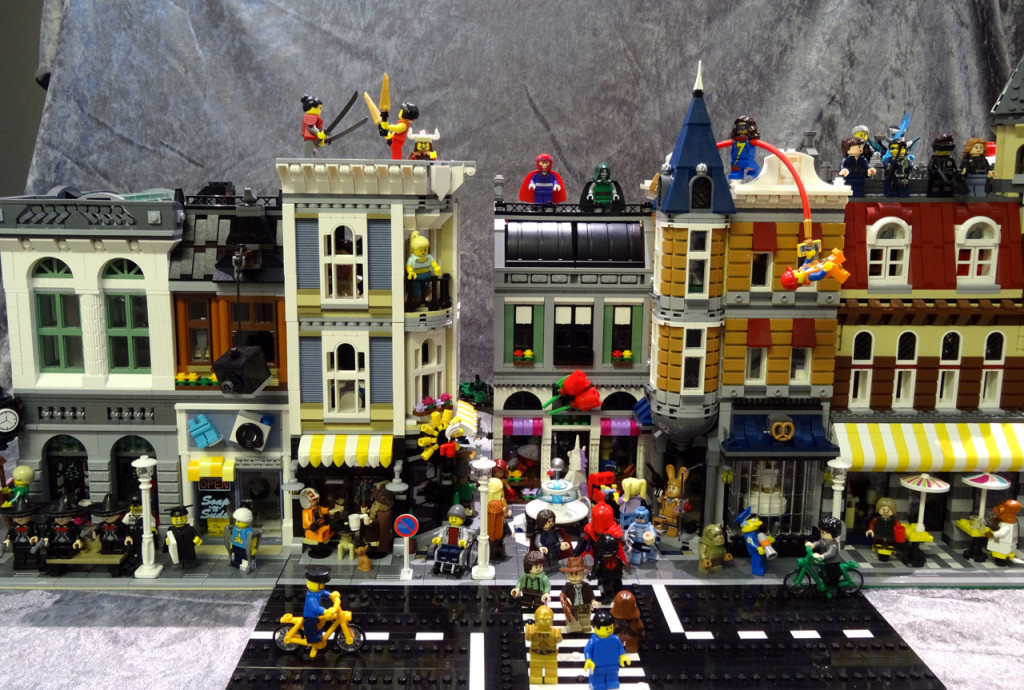 There has been rumours that this would be the final modular building. That would be a bit sad, but also maybe the right thing to do. There is still more they could do – the series distinctly lack the police and hospital themes that are quite common in City. But there also has to be a limit to the wallets and shelf space of even the most dedicated collectors. Assembly Square is a fantastic set that is easily up there with the best, maybe only after Parisian Restaurant and Green Grocer, but it’s also something that will be very hard to follow. Going back to 32×32 will feel tiny, even though a lower price will certainly be welcome. Either way, ten years of inspiration is quite enough for me and while I will buy any successor (regardless of how cramped my shelves already are), I could happily just make my own from now on. 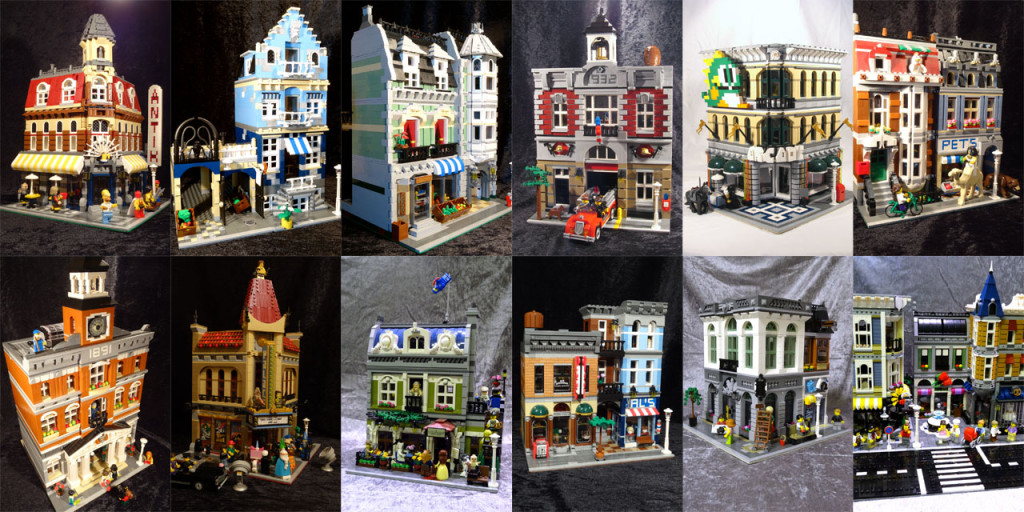