Looking back at last year’s modular building … it turns out I never even reviewed it! This won’t do, so before we look at the 2021 modular Police Station, let’s rewind past pandemics, coup attempts and demonstrations against racist oppression to a quieter era, to a time where life was simpler and safer – one year ago. Phew.

Bookshop was a big surprise after the last two modulars. The Downtown Diner and the Corner Garage established a more modern 50′s take on city architecture, but Bookshop takes a big step back into quaint, idyllic urban life. For the third time in modular history (after Market Street and Pet Shop), the set consists of two completely separate buildings, the Birch Books which gives the set its name, and a very aggressively teal-coloured townhouse. 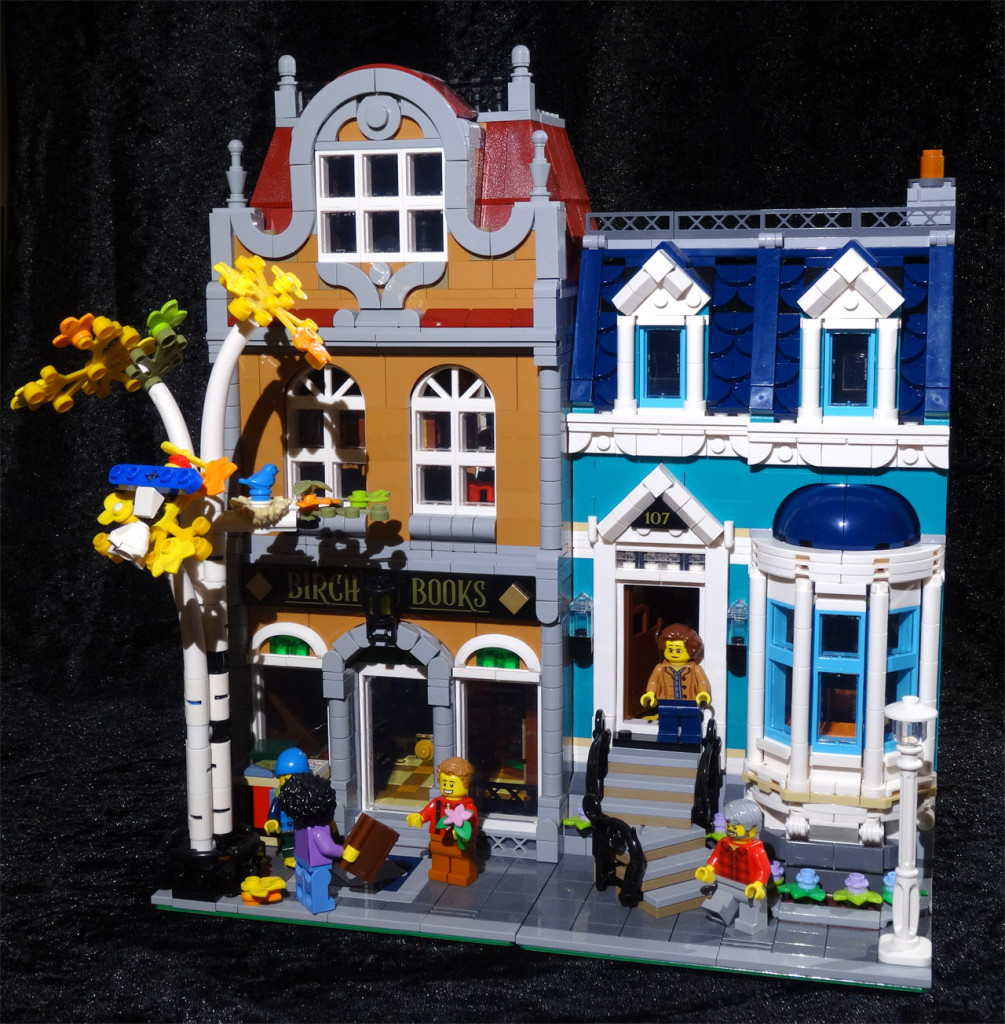 The bookshop is an attractive, plain building which feels slightly older than the previous line, with a more European, slightly Dutch feel to it. Some printed tiles provide detail, but the facade itself is quite simple with only some new rounded pieces adding some flourish. The top floor has more sculpted details and the rounded top is cleverly constructed. Overall it makes for one of the prettier modular buildings with a deliberately simple palette. The birch outside adds a lot of character and I like how it’s in autumn colours. Props also to the designer using Kraven’s fur collar as a bird nest.

Going inside, the bookshop lives up to its name but only barely. The floor is nicely tiled and the green carpeted staircase is exquisite, but there are only a few actual bookcases. Upstairs there’s a landing before you move on to the second floor and it adds a lot of architectural interest but practically it’s stupid – there wouldn’t be enough room for a minifigure to stand straight once you add the second floor.

The second floor has a nice little sitting area with a nice clock and the same type of carpeted stairs. The small balcony on the back is neat but takes away a lot of floor space from this building. At the very top there’s just an attic bedroom, with a nice teal bed and, as a little bonus, a terrarium with a similarly teal chameleon. The entire back of the building lifts off as otherwise you wouldn’t be able to see down into the room. Overall, this building is really cozy and I’d like to visit it for real, which is always a high mark for Lego modulars.

The townhouse reminds me a lot of the townhouse part of Pet Shop, but with a more distinct colour scheme. The stairs are designed in a nice way using some cool geometry, and the same goes for the bay window which utilizes the new candle parts to good effect. The angled section over the door isn’t very pretty, but fits well into the space with some smart design. Inside there’s a neat little apartment sitting room, with a teaset on the small table, a fireplace, a nice cupboard, a clotheshanger and even a bench by the window.

Stairs lead up to the bedroom, which basically only has a bed and a dresser. The upper floor lifts off in two parts – the bedroom itself and the back wall with an outside patio. The outside roof area is fairly simple but the tiled roof is made from angled sections of quarter circle tiles which make for a very nice texture. 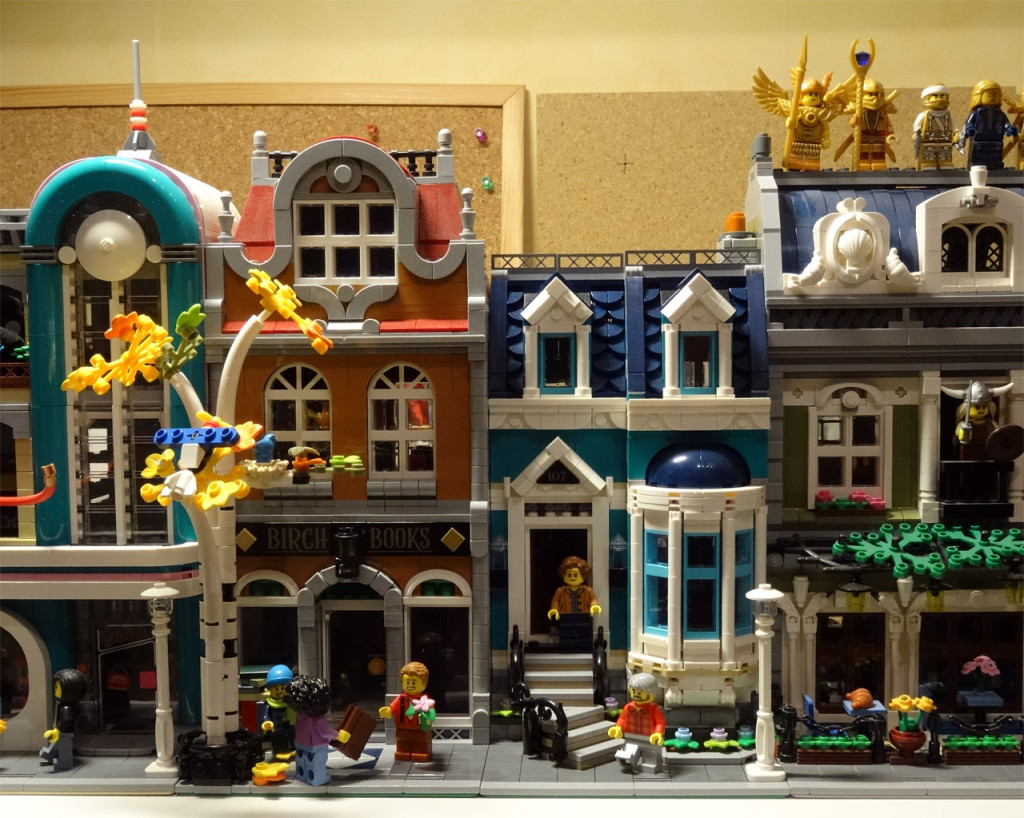 Overall, that’s also the main impression of the Bookshop – nice, neat, cozy, pretty. Being able to compare it to 2021′s Police Station, I like it even more, as it brings back that rustic town feeling that the earlier modular buildings had, and both buildings are aestetically pleasing even though I would have preferred a less flashy colour on the townhouse. It was just unfortunate that I had just finished a bookshop of my own, which made me a little annoyed at Lego releasing this. The Bookshop is slightly cheaper than both the Corner Garage and the Police Station with only a couple of hundred fewer parts, so it’s a good deal. In a weird twist of fate, it feels like a farewell to the past in many ways.