Ten years ago, Lego had a revival of sorts. Sure, they had begun to recover after the mismanagement that nearly killed them and there were the occasional huge Star Wars sets, but it seems to me that 2007 was the year they really started making these giant prestige builds. In three years, they made Café Corner, Green Grocer and Fire Brigade, starting the modular series with an amazing standard. They made the biggest Star Wars sets ever, the UCS Millennium Falcon and the Death Star. They made the gigantic architectural showcases, the Eiffel Tower and Taj Mahal. And they made the extremely detailed Grand Carousel.

Grand Carousel is one of those ridiculous sets that you basically can’t put together today. There’s just too many unique parts that will force you to get the original at an obscene cost. After the 2014 and 2015 Fairground Mixer and Ferris Wheel, it became an even more glaring hole in the collection. But now you can finally leave it behind. This may just be the Carousel, but it’s just as grand. 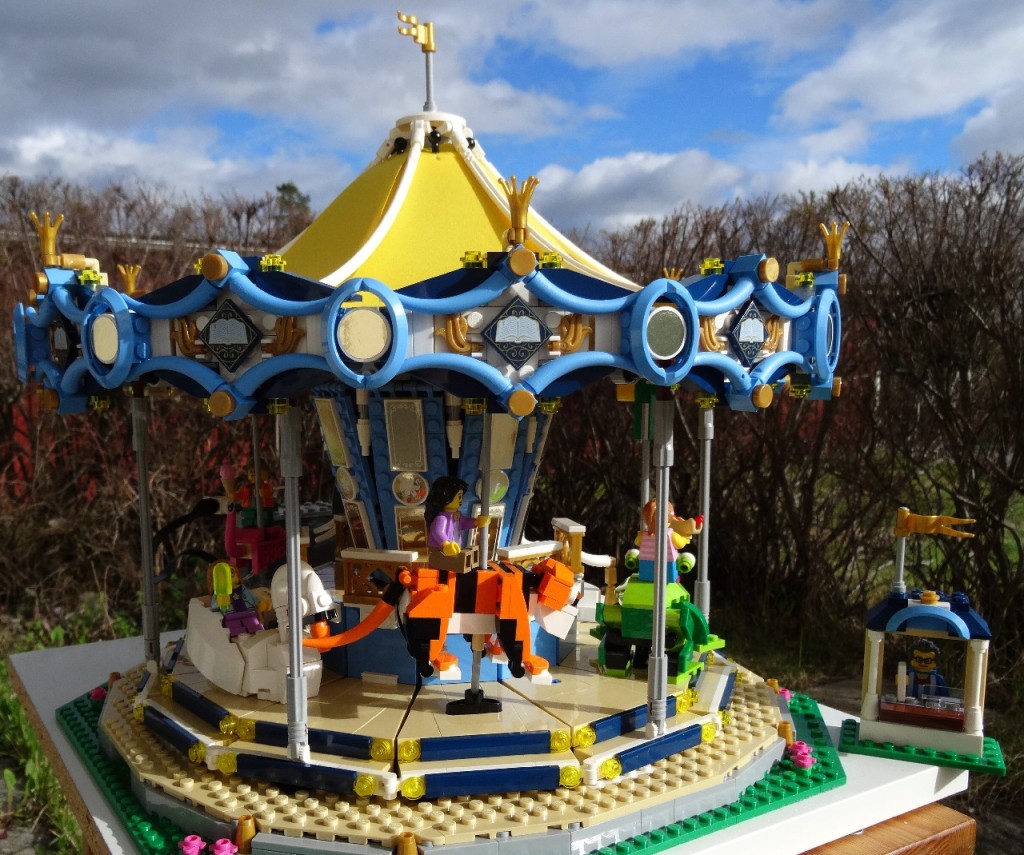 To begin with, it’s huge. It covers a 40×40 area, but like the Ferris Wheel it’s mounted on plates and the mechanisms inside require you to place it on a flat surface or raise it a little before mounting it to a baseplate. The cresting overhangs a bit, so it will require a bit more although not as much as the Ferris Wheel. Overall, the design is very classic, although instead of the traditional horses it uses a fairytale theme and has a number of animals as rides: a frog, a tiger, a swan, a flamingo and an elephant. All of them except the swan hang from the cresting and move up and down using a system much like actual carousels. The platform itself rests on the huge gear used in the Technic excavator and has wheels to ensure a smooth ride. Interestingly, the entire center pillar and the crest obviously move with the platform but there is a stationary Technic axle whose sole purpose is to make it so that the flag on top doesn’t spin around. That’s attention to detail! 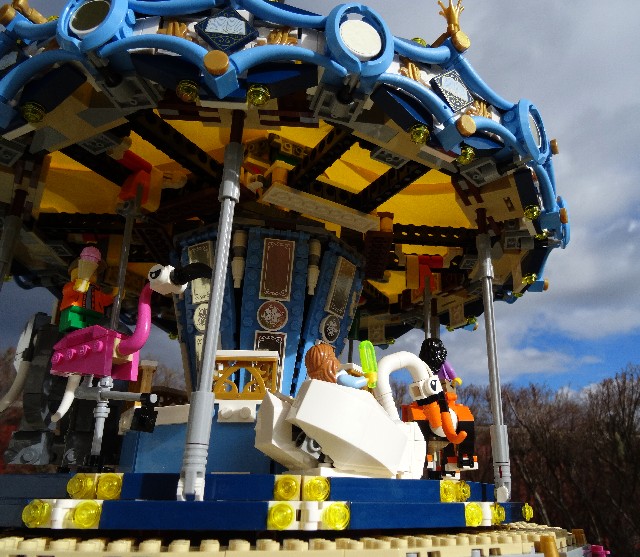 With over 2600 parts, it’s a long build, and as always with circular builds there is lots of repetition. Once you build the base, there is a lot of stacking of tan slopes, making up the platform, and then you move on to the eight faces of the central pillar which are adorned with golden stickers. These are fairly simple to put on, but it’s important that you get them right as there are (as usual) no spares. The upper section is also fairly repetitive, but you get a fun diversion in the fourth step when building the rides. These are five mini-Creator animal builds but adapted to the higher age requirements, so they include lots of really funky techniques. After that, the fifth and final step includes tons of repetition as you build the entire upper section including the covering sweep and the crest, which is made up of twelve sets of two small builds that might drive you crazy. 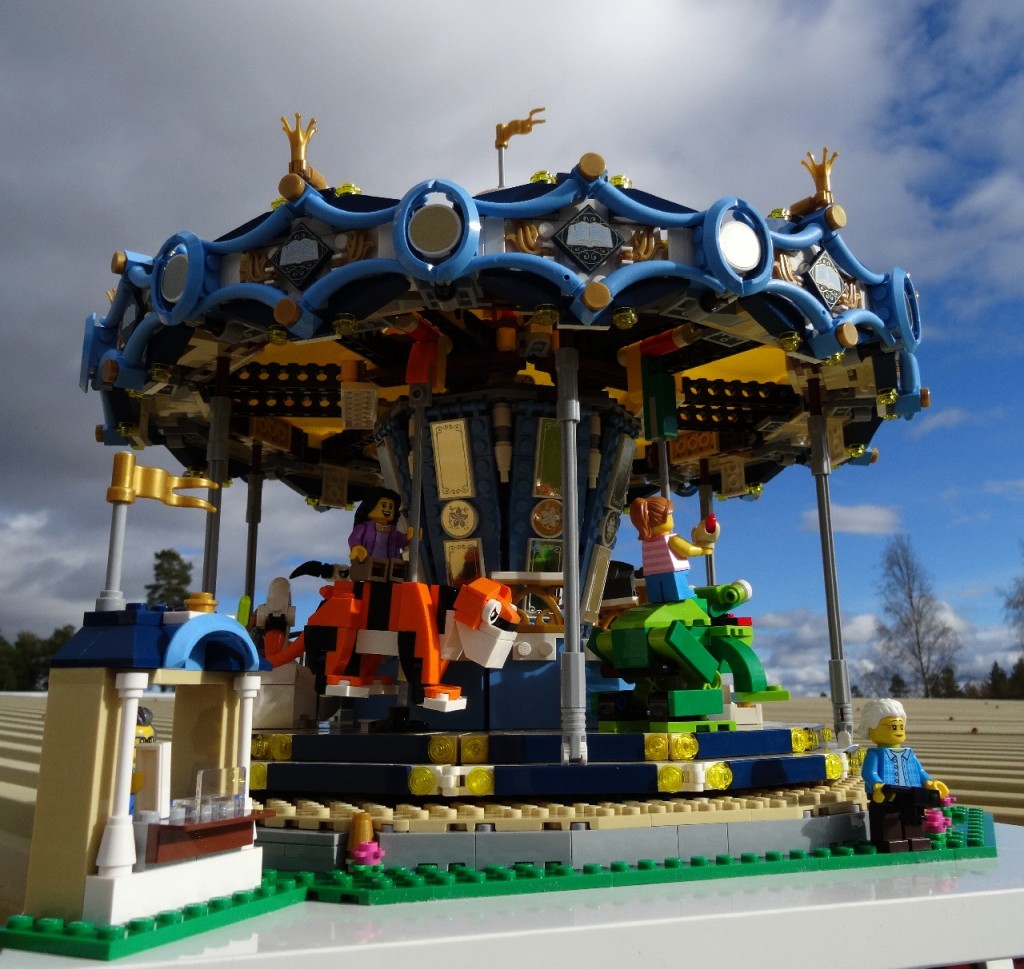 The end result is stunning, though. The white, gold, tan and dark blue are similar to the Grand Carousel but the medium blue and yellow helps to tie it graphically to the Ferris Wheel. The platform can be cranked around with a small lever to the side and it moves smoothly and the four mounted animals move up and down. Like the previous two, there is also an option to mount a medium motor and battery box to power it and this works really well with a good default speed even if you don’t have a speed control box. However, it must be noted that it’s really noisy. This is my first modern Lego motor so maybe it’s expected, but it would have been better to have it moving slower and not have as much down-shifting through the gears. 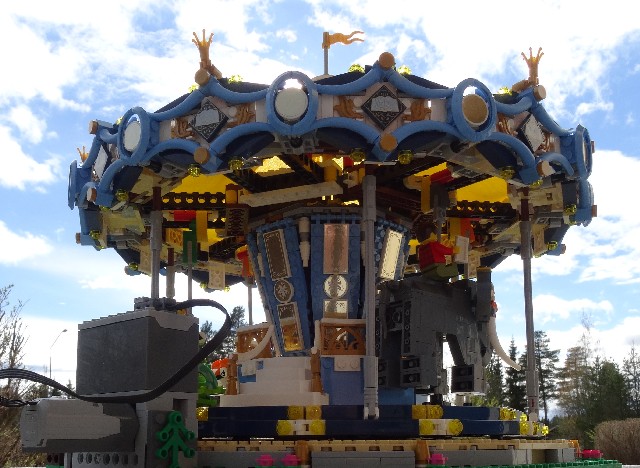 I also have to note that some building steps are really complex and especially the platform is really brittle until you tie it together with hinges. Younger builders would probably get frustrated. On the flipside, there are some parts that are genuinely amazing, like how the mirror sections of the crest connect to the central structure. I wouldn’t let kids play with the finished set though. It’s sturdier than it looks but much of the decoration is mostly only held on by being tucked behind something else. For transport purposes, the base is solid enough but trying to lift it by the upper structure feels very perilous. It can also be noted that there are two variations on the medium blue tail part. I thought that there was an equal number so you could turn the little hole to the inside on all of them, but it didn’t quite work out. I can’t tell if this is intentional or not as the instructions don’t make a distinction.

If I’m being honest to myself, I really don’t have anywhere to put this. I recently dismantled the Ferris Wheel after having it sitting on the floor, being in the way. However, the day I move out to a bigger place, I will have a bigger display area and it will definitely have to make room for a tivoli. And I would urge you to get this as soon as possible if you ever think you will want it. Sure, there might be another in eight more years. But just like Grand Carousel, you will never be able to piece this together. Not only are the cloth sweeps and the stickers unique, it uses tons of rare or unique medium blue parts. It’s also a fairly good value already. 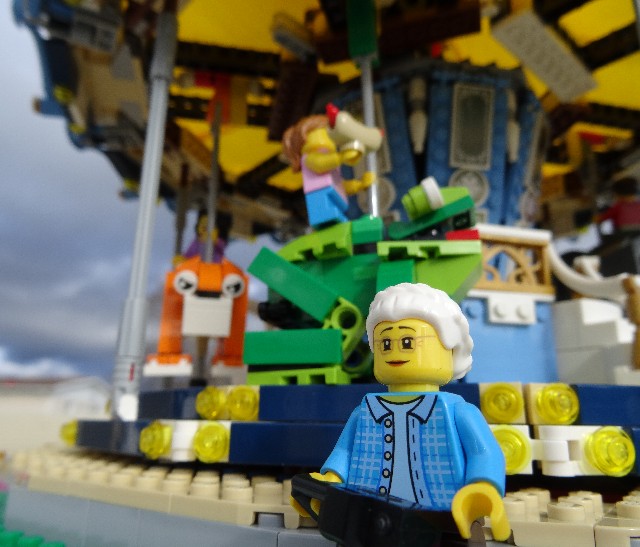 As a fairground attraction, it’s already a very specific piece that might not be to everyone’s taste. It’s shamelessly playful and gorgerously detailed at the same time. It will probably be a dust magnet in the years to come and I don’t see myself using the motor that often. But I still knew I had to get it and I’m not disappointed at all.