The second wave of Lego Elves covers the conflict with the witch Ragana over the dragons, something that was obviously foreshadowed with the cursed well in the fire dragon set in March. Even without having seen the web series, it’s fairly clear what’s happening. This set includes a cute little evil tower with lots of play features but the main attraction is the Queen Dragon herself. 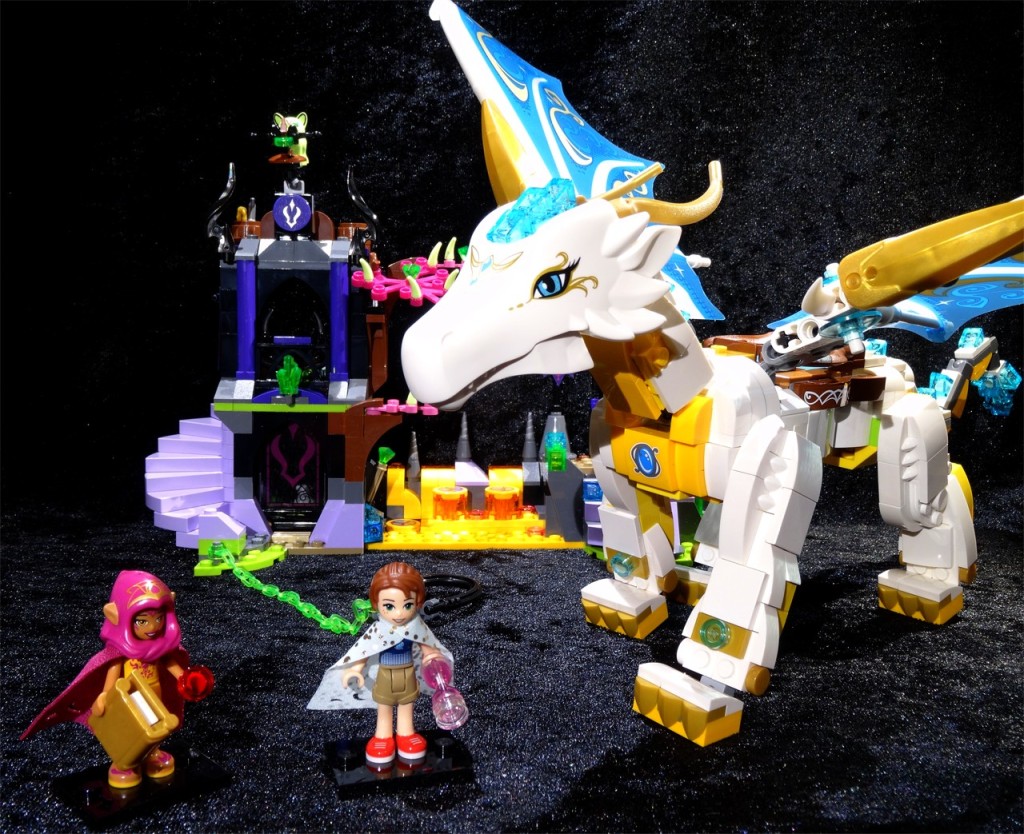 While the elves get their elementally themed dragons, the Queen is mainly white and gold with splashes of transparent blue, somewhat similar to Legend of Chima’s Eris. One thing that didn’t come across in the pictures is the size: the Queen is huge and towers over the medium (fire and wind) and small (earth and water) dragons. Before you even get started, you build a really complex, solid body that casually shows off many techniques which are sure to add new ideas to any builder’s arsenal. The wings are also special. Unlike the molded semi-soft plastic of the rest, her wings are thin, mostly transparent sheets in the same material as the new banners. The result is stunning, though. It can also be noted that the Queen has an exclusive head which is similar to the others but almost twice as big. 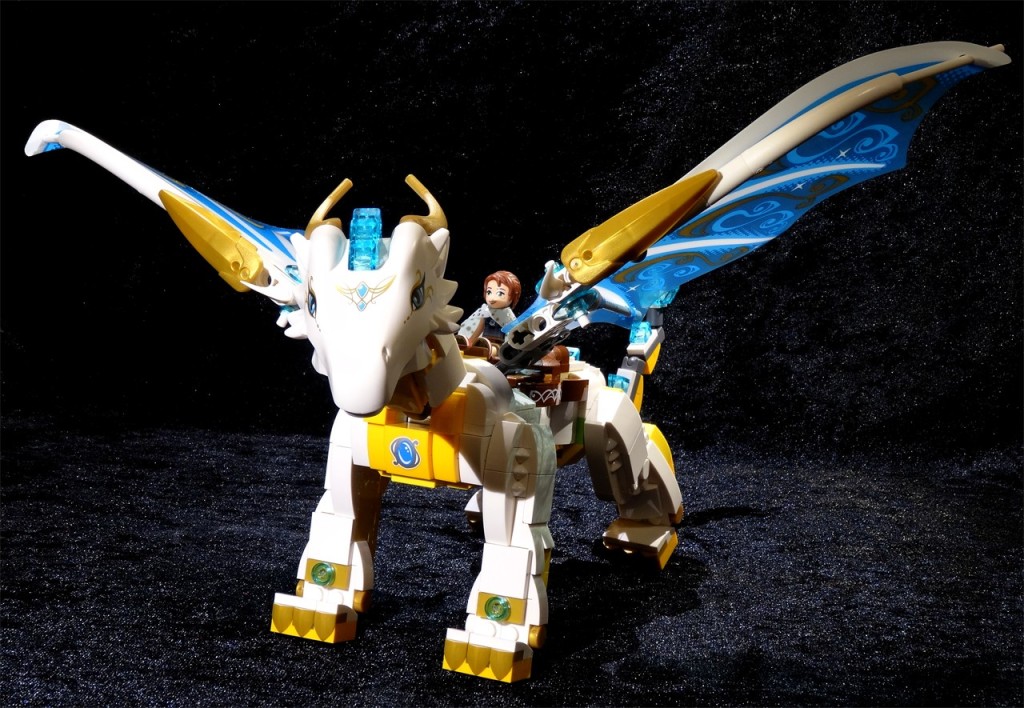 Despite her size, the Queen is kept captive at the tower by a huge padlock connected by some nefarious magic, but first you have to cross a lava fall. The hill to the right looks like the entrance from the forest and is covered with the regular assortment of crystals, and has a hidden compartment behind it. The lava is no match for Azari, however, who can use her magic to raise steps out of the lava to reach the tower. The tower has a basement where another prisoner is kept, a small mouse with the same type of tattoos as the other familiar elf animals. A great stained glass window covers the entrance, but it can be lifted out of the way by a lever.

At this point you can climb into the tower itself, which seems to be Ragana’s summer house. There is a small bed and some treasure, but what you need is the key to free the dragon. Once all that is completed, you can head back outside to release the Queen, but there’s another danger: an evil green fox firing a mounted crossbow! It’s interesting to note how Elves has gradually introduced action features, but I like it. If you’ve armed your heroes with the sword and shield from the marketplace, you should be alright. 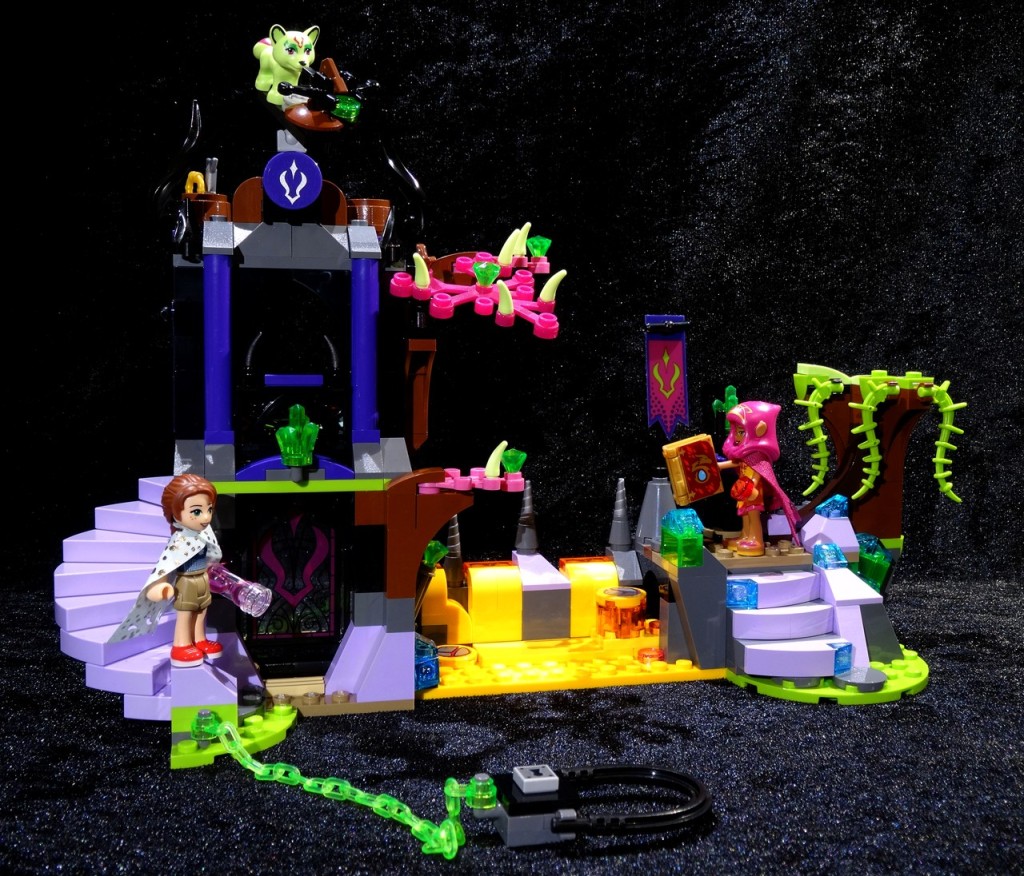 Speaking of heroes, in this set we get Emily and Azari, both of which were in the Fire Dragon’s Lava Cave set (41175). The prints are identical, but Emily has a new cape and Azari has one of the brand new ”cloak with elf ears” which are introduced in this wave for the three elven heroines, and she also gets a cape. It’s neat to get variations at least. Emily also comes with the timeglass previously seen with Tidus in another set.

I really like this set! The Queen Dragon is a great build and looks amazing, especially along with the other dragons. She puts Smaug to shame – possibly not in size but in detail, and being mostly built from standard bricks. She also looks much nicer than the similar Ninjago dragon from last year. Then there’s the tower which reminds me of games I used to play, where my cousin would build little scenarios that I had to figure out. There are already app games for Elves, but I could really see a Lego Dimensions level with similar ideas. Let’s hope. Overall, this is the Elves dragon set to get – but you gotta catch them all, right?