Back in Soul Edge, Rock Adams was one of my favourite characters. He played great, looked really cool, had a nice voice (courtesy of Robert Belgrade, the same voice actor as Alucard) and a fantastic stage with excellent music. There’s was also the nice background story with him rescuing Bangoo. However, Rock was pretty much forgotten and replaced by the boring Astaroth, and it seemed Namco only kept him around to fit him out in progressively crazier trophy hats. Adding insult to injury, his original axe was replaced by a mace. I mean, really?

In either case it’s unlikely that we will see him again in Soul Calibur 5. But that at least means that Bangoo is rather likely. He will be about Rock’s age now and hopefully will return to the axe, unless he goes Nightwolf on us and dual wields tomahawks. This art shows the simple but effective bear outfit he used to wear. Shame about the low quality model used for the render though, the others look much better. 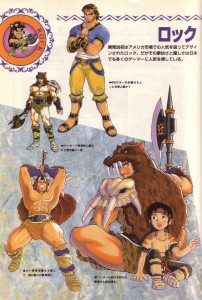 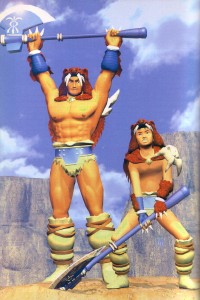