The S.H.Figuarts line (just Figuarts to anyone reasonable) sets out to challenge the rivals Revoltech and Figma in the roughly 1/12 scale figure scene. Previously I’ve been a bit disappointed by the Mario and Luigi figures, but while in Japan I happened to pick up two new ones. And then I walked by a display stand which had the Scout Trooper, complete with Speeder Bike. Unfortunately it turned out to be a web exclusive, but hey, that just means I didn’t have to carry it home.

Some history first. When I was four or so, Star Wars, or more specifically Return of the Jedi, replaced Fraggle Rock as my favourite franchise. I got a bunch of the figures including this specific trooper and his bike, and I recall having vague memories of scenes in the movie even though I couldn’t have seen the whole thing. I did however have the translated cassette story – you know, ”when you hear this sound, turn the page”. Anyway, the Speeder Bike ended up being the name for some trees we climbed around in and used as a spaceship. Why it wasn’t the Millennium Falcon, I don’t know. Anyway, it stuck with me. 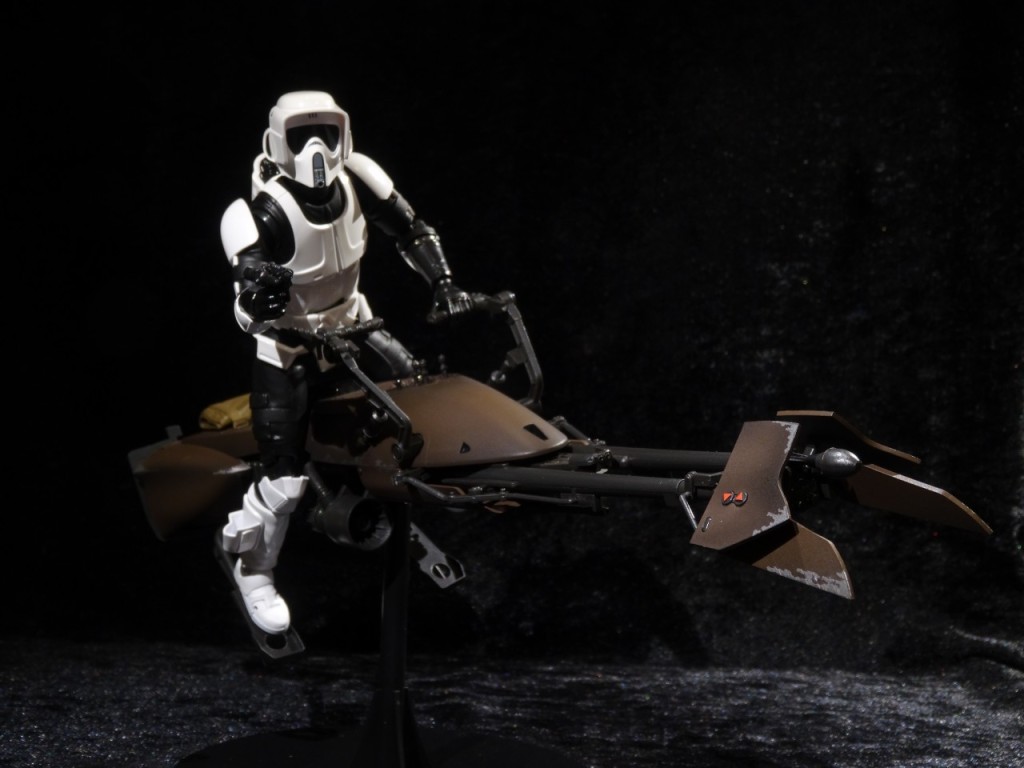 So, Figuarts Scout Trooper and his bike. The trooper is very finely detailed and has great posability. He also comes with a few extra sets of hands, but the slightly more open hands are most useful for posing. I’m not a huge fan of how the shoulder plates sit on very thin ball joints outside of his actual shoulder. It makes posing and adjusting easier, but it looks very fragile. Also, the shin holster for his gun is rather big to be able to hold a figure scale gun. Once again I feel like another figure builder like Figma would have gone the extra mile and made an alternate piece with a slimmer sheathed gun. Apart from that, he’s great. I always liked how the Scout Troopers seemed like elites, more individual and competent (as movie cannon fooder go), and the helmet really helps this. They really do look like scouts and not just grim soldiers. 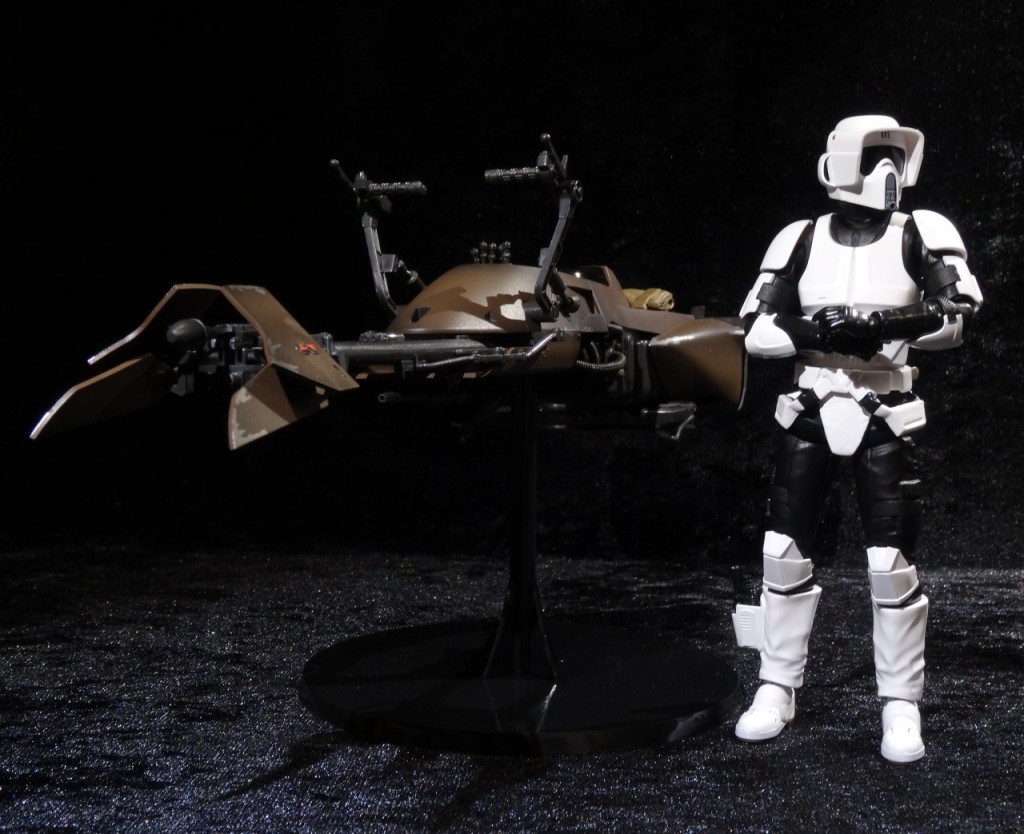 The Speeder Bike itself is extremely detailed, with all kinds of tiny levers and sub-millimeter rods. It’s actually a bit scary to handle as even the manual points out that the handles are weak spots. These obviously articulate, with some piston action going on, while the rear flaps can fold out and the foot pedals also hinge up and down. The entire thing sits on the display stand connected by a ball joint, which is hidden away on the undercarriage by a removable (tiny) plate. You can also remove the pack from the back if you’d like, with another plate to replace the hole. Since you obviously want this thing to hover, I can’t see when other options would be used but at least it presents a pristine surface. It also makes it possible to tilt the entire bike to get those great poses, but note that the Trooper doesn’t attach with anything more than his hand grips on the (movable) handles. 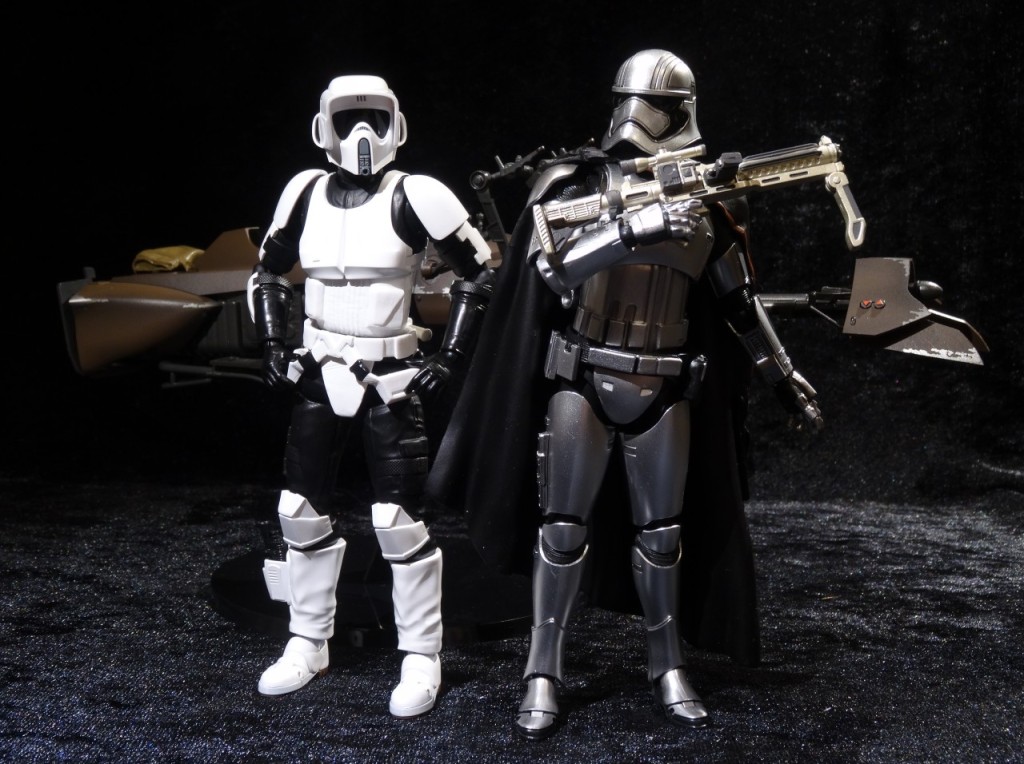 At around 28 cm, the bike is a nice size and the 15 cm Trooper also feels solid enough, although slightly too big compared to my Phasma. While it initially (two weeks ago) sold for $130, it rapidly sold out at the official Bandai shop and will probably get more expensive by the day. I don’t know how big the fanbase is for this one, and there’s obviously plenty of alternatives like the Black Series set or, if you’re pretty damn rich, the Hot Toys 1/6 version. But as a collectible, I feel like I got my money’s worth. I don’t have a need to collect tons of Star Wars figures and a single figure would look lonely (at least Phasma gets to hang out with Samus), but the Speeder Bike makes for a great diorama on its own. If you’re a Jedi fan or if you just like Scout Troopers, you’d better jump on this quickly. 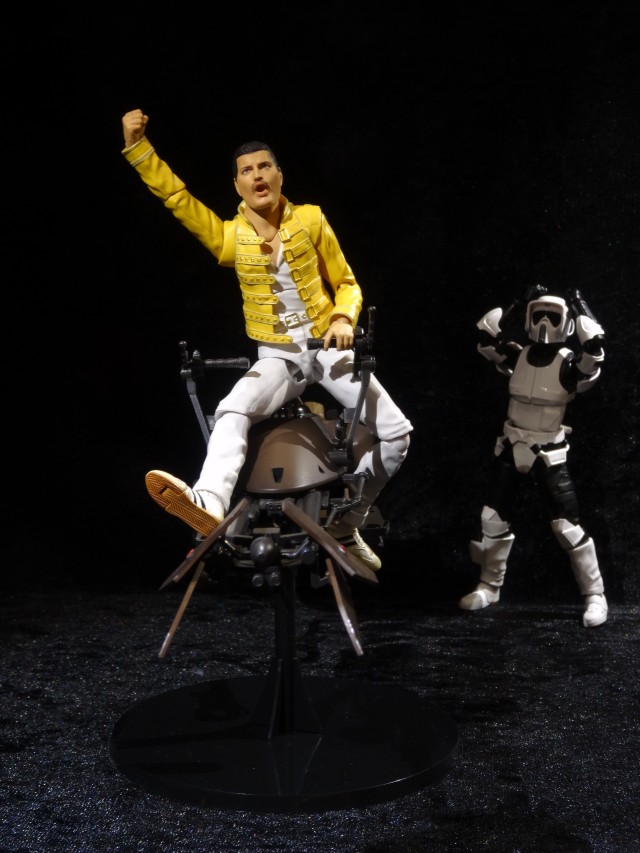 But, uh, carefully. Because it’s just that fragile.