Dark Souls II is almost here and a guide to Dark Souls might be off by about two years or so. However, this is something that can’t be said enough. If you’ve ever struggled with the game for no apparent reason, you might have fallen into the most devious trap of them all.

One of the great things about Dark Souls is how it’s constantly bringing in new players, and how the experience of following a new player through trials and death is almost (almost) as exciting as doing it for yourself. However, for some peculiar reason the story is often the same.

Well, there’s your problem. Dark Souls is filled with traps designed to kill noobs. The hellkite drake on the bridge, the first encounter with the asylum demon, the Anor Londo archers, the Sen’s Fortress elevator, well, pretty much the entirety of Sen’s Fortress. But the greatest trap of them all is a weapon very easily accessible early in the game. The Drake Sword.

The very first part of Dark Souls, getting through Undead Burg and Undead Parish, can be a tough challenge for complete newbies. I know, I was one. You can spend weeks slowly crawling towards the cathedral, possibly getting one stop closer with every death. At that point, a weapon that’s more than twice as powerful as your basic gear seems like a godsend, and almost like cheating. Somehow every new player never ever touches a FAQ (”I’m not using a FAQ, I want to figure stuff out on my own”) and still manage to do the simple but very random act of striking the tail of the hellkite drake. And then end up trapped.

Basically, an un-upgraded weapon like the Longsword (warrior starting weapon) or even the Uchigatana (available by killing an early merchant, something new players might hesitate to do) does around 100 damage at this point. Drake Sword does 200. That might be the boost you need to power through the outer gates, across the cathedral and making it to safety in the abandoned basement where you find Andre the blacksmith and a very useful bonfire. If you’ve used Drake Sword for this, good for you. Now drop it! Yes, drop it. Cast it away. Begone, foul sword!

The thing is, there are two ways to do better damage: upgrading weapons and upgrading your stats, which in turn affect scaling. Scaling is horribly complex but comes down to that every weapon has some stats it needs, shown by the cryptically named ParamBonus with letters like ”D/B/-/-” on the item info page. First letter is Strength, second is Dexterity, third is Intelligence and last is Faith. A higher letter (A or S) means it scales better with that stat. Basically, if you want a strong melee character, look for weapons with B, A or S as your Strength scaling, and so on. 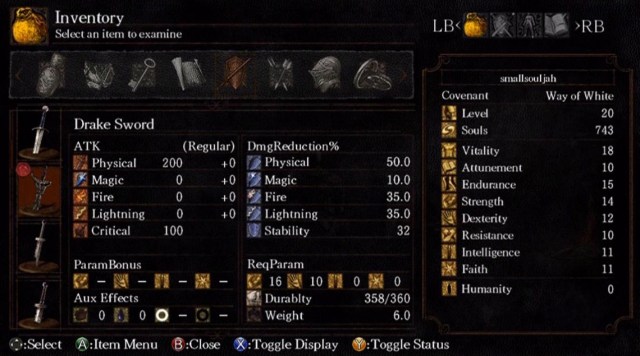 The scaling for Drake Sword is -/-/-/-, which means it doesn’t give a crap about how high your stats are. It does 200 damage and that’s it. (Well, it also has a neat special attack when you hold it with two hands, but that is highly situational and also breaks your weapon.) The only way to improve the damage of Drake Sword is to upgrade it. However, and here’s the problem: the Drake Sword is a dragon weapon and thus can only be upgraded with Dragon Scales, plus a hefty fee of 10000 souls each time (normal weapons upgrade for a few hundred). All of them are hard to find, and in the early game (before Sen’s Fortress, where people get into trouble) you can only find four. (This is not strictly true, as you can get into Ash Lake and collect plenty more from the very beginning of the game, but that takes some real skill and then you’re not really a noob.) And that’s with doing some out of the way stuff like killing the Darkwood hydra, killing the drake in Valley of the Drakes, and getting an Egg Vermifuge in Blighttown and then trading it in the Asylum. Basically also stuff you won’t be doing without reading a FAQ. Either way, before you’ve gotten the Lordvessel and are on your way into the endgame, you normally do 200-260 damage with the Drake Sword, at +3, having done all the hard side stuff and spending 30000 souls.

For contrast, let’s look at another popular weapon, the Uchigatana. It’s a pure Dexterity weapon with B scaling to start out with. Most early weapons are ”Quality” weapons, a Demon’s Souls term that means they scale with both Strength and Dexterity, so you need to pump in a few more stats, but on the other hand it eventually scales higher. Either way, all weapons are mostly the same once you start upgrading them, so it comes more down to what movesets, speed and range you prefer. However, the Uchigatana is of a similar weight, speed and range to the Drake Sword, and it’s also available before finishing Undead Parish.

As a starting character with a few points in Dexterity (I tried it at Dex 18), the Uchigatana does 115 damage. As a special effect it also has heavy bleed damage once you do three hits in succession, but that may be too much to consider initially. So it’s weaker than the Drake Sword as you make it past the bridge, through the boar gate and around the cathedral. An unassuming player might look at the weapons at this point and go ”Huh? This is twice as good. Let’s dump that crappy katana.” And that’s the trap.

Once you reach Andre, you can start upgrading your Uchigatana. Taking it to +5 costs 9000 souls by just buying Titanite Shards, less if you already found some. And at +5, without levelling up from Dex 18, you’re already doing 174 damage. And you’ve only just begun.

So you’ve killed the Belfry Gargoyles with your Drake Sword or your Uchigatana, and you’re happily exploring to progress into Blighttown. As mentioned, you can do a lot of work and possibly upgrade your Drake Sword to +3 and 260 damage. However, that’s it for a very long time. You might struggle past Blighttown with it, but there is where most people give up. Meanwhile, on your way to Blighttown you found a Large Ember in Depths. Along the way you will also get Large Titanite Shards, and they can be farmed off the slimes in Depths and the slugs in Blighttown. You can kill Quelaag and ring the second bell or retreat up the water wheel first to improve your Uchigatana. And at around level 30, with Dexterity a bit over 20, you’re suddenly doing 260 damage with your brand new +10 Uchigatana.

Now, for the sake of being fair, let’s assume that you’re not sequence breaking or building a glass cannon character, so you’re moving on to Sen’s Fortress and Anor Londo. You’re doing similar damage at this point, but the main difference is that you can level up your Dexterity to improve the damage of the Uchigatana. The Drake Sword bloody well stays at 200-260. Once you finish Anor Londo, it’s time to go to New Londo Ruins (you can of course choose other places first, but that’s a good place to start). In there you find the Very Large Ember, and also conveniently enemies to farm for Titanite Chunks and possibly a rare Titanite Slab. With these you can upgrade your Uchigatana to +15. I’m also assuming that you’ve kept levelling up during all this. At 40 Dexterity with a +15 Uchigatana, you do 420 in pure damage. Meanwhile, if you somehow survived Anor Londo with the Drake Sword, did the side trip to Ash Lake and got all of the scales there, and spent another 20000 souls, your weapon is now at 300 damage.

What all of this comes down to is that the Drake Sword is superior for a very short time, is overtaken about 15-25% through the game and is eventually, after a difficult and expensive upgrade procedure, only about 70% as effective as another common weapon in the endgame. That’s bad.

What’s worse is that it does you a HUGE disservice. Dark Souls is a very cleverly constructed game. Every enemy is placed there to teach you something new. The undead warriors around Undead Parish typically carry shields, you that you learn to block and counter, or circling and backstabbing, or even parrying and riposting. Just waving your sword usually ends up trading hits and you can’t take much more damage than them. With the Drake Sword, you might still get by with button mashing and thus never learning the fights. And once your damage output isn’t enough anymore, at around late Blighttown or early Sen’s, you’re in that famous creek without a paddle (which, incidentally, would also have been a better weapon at +10).

Incidentally, you don’t need to pick the Uchigatana. That’s the point of the game, you don’t need to pick any weapon. Plenty of early weapons that you can get before Undead Parish are very viable throughout the game. Zweihander, Winged Spear, Longsword, Claymore, Halberd, Reinforced Club (seriously!) and Bandit Knife are very well liked weapons, and if you’re lucky with drops you can find the heavy-ass Black Knight Greatsword or the Balder Side Sword in the Parish.

So the Drake Sword has better damage for a very short time and is then basically a dead end, while any other weapon can be worked with and used to stab Gwyn in the face at the very end. It also teaches you how to play sloppily, and is rather heavy and prone to breaking if you mash the wrong attacks. Let’s rewind to that moment with Andre the blacksmith. Throwing the thing away isn’t very hard now, is it? 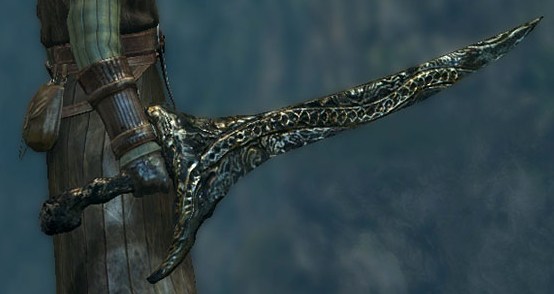 And the thing is ugly as hell too.