While winding down on the Downtown Dojo build recently, I started thinking about another building I wanted to make. Across the square from where the inspiration for that house stands, there is an old building flanked by newer ones. It currently houses a bar, but it used to be a food court, as proven by the old signs that still exist. The original building is a slightly faded red and I had soaring ideas to finally make a modular in sand red – a discontinued Lego hue that was available in sets in the early 2000’s. Then I faced reality. There are very few parts available and those that are cost tons. So I made a compromise. There is a band of more heavily faded red near the bottom, so I used sand red for that and regular classic red for the rest. 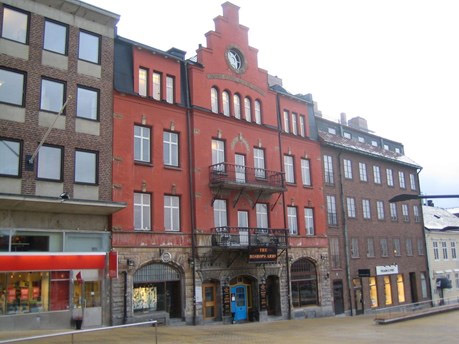 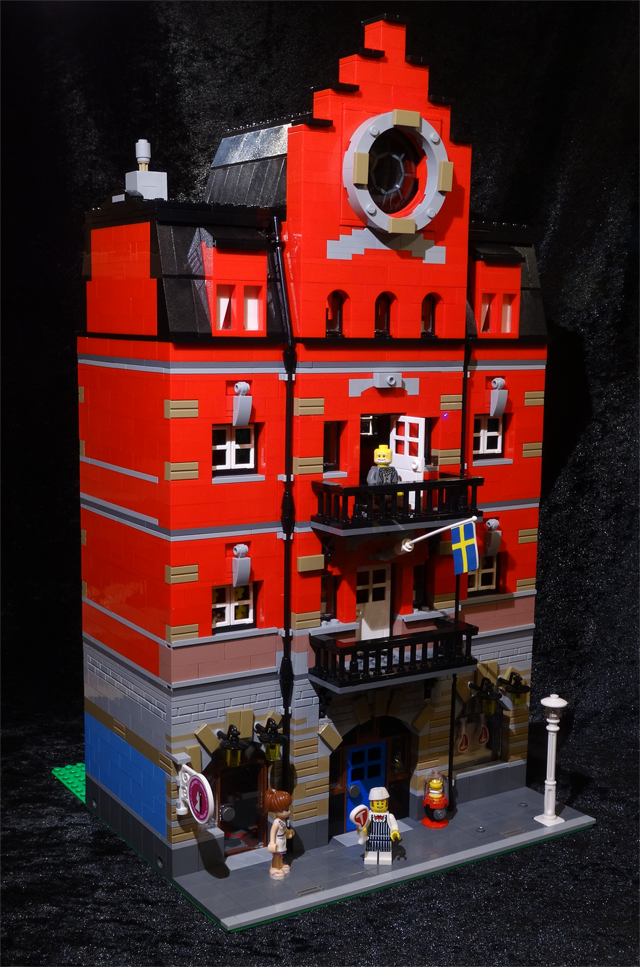 Unlike the Dojo, which only had a pencil sketch to work from, I built Author’s Home in Lego Digital Designer, for several reasons. One is that I was temporarily out of cash and didn’t want to overspend on parts I wouldn’t eventually need. Another was that I wanted to get going without first waiting for packages to drop in. Also, there are several benefits to working digitally – like being able to copy sections and pull out parts from the middle of walls if you figure out new ideas. The downsides is that LDD is fussy about illegal connections, which there are a few of on this build, and that the parts inventory is sometimes wonky. Exporting a parts list took a lot of work and then trimming it down to parts that actually exist (there are no dark bluish grey 1×12 plates, strangely enough). Also, once I had everything in place, I used the program to generate a building guide to place all 2700+ bricks. The AI works in peculiar ways, and the experience is kind of building alongside a rather drunk child. The instructions started from the first floor and then worked downwards, hanging pieces off the underside as I went. It seems to work on a line of sight idea, with pieces put into place all over the place and sometimes building floating sections or sneaking parts in between locked sections. The words ”go home LDD, you’re drunk” were rather common during the two days it took me to put it together. 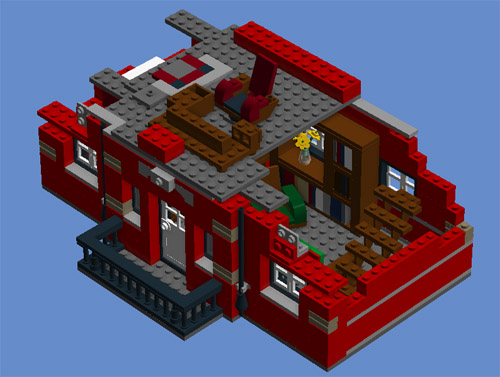 Not according to building regulations.

While I had some idea of what parts I had available, I wanted some luxury in terms of rare colours and exciting new parts. I achieved this with a combination of regular Pick-a-Brick for some bulk parts, Bricks & Pieces for some rare newer parts (like the TIE Fighter window which incidentally looks exactly like the top window on the original building), and a handful of Bricklink orders. The sand red band was designed expressly to only use two parts: 2×4 bricks and 2×2 corners. However, I found a few regular 2×2 with the same seller so I changed it around a bit to make a neater stack, and I was unable to get all four corner bricks at once so I used some grey ones instead. The flag was a late addition when I went downtown to compare the building to my design and spotted a flagpole mount – the flag itself is a very rare piece dating back to the 60’s, almost half the supposed age of the building! 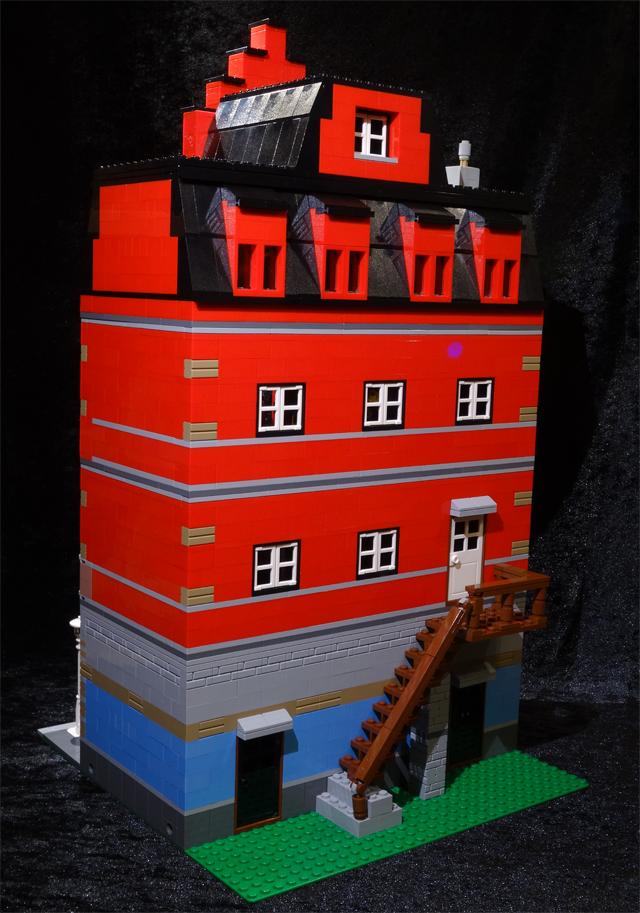 I used the lamp idea from Detective’s Office for the street level lights and to fill out some spare studs used for the curved bricks. I also wanted a wedding shop to the side, and a couple of sticker sheets from the Friends mall proved perfect for the signs as well as the display dress. Inside I got a bunch of neat formal torsos, and found another great use for the ridiculously useful new transparent part. The food court section is simpler, relying mostly on the Butcher collectible minifigure and his great accessories. Both rooms have tiled floors, which LDD incidentally told me to put in from the bottom.

The apartment is accessible via a staircase outside. The actual building crosses the entire block and there are other stores on the back side, but artistic license and all that. The first floor is an open space kitchen and living room area, with a slightly modernized set of utensils – I love the metallic silver tiles and use them whenever I can. I couldn’t find the classic tap in grey, but Lego uses it for Friends nowadays so it can easily be found in white or gold. The sofa was adapted from Lord Business’ Evil Lair and the big set of drawers under the stairs is an original design. While it’s not apparent, I put some yellow flowers on the curtains facing out. The floor lamp uses a sand green stand and a sand blue shade for the heck of it, and because the sand colours are amazing.

The second floor is the library and bedroom. Not much to say here, except that LDD had a blast with the bookcases. For the bed I thought of Bilbo’s bedroom and went for muted colours, with dark brown, dark red and tan. The inverted slopes are rare nowadays but I scavenged some off my viking ship.

Finally, the top floor is the work area for our writer M.S.S. Tolkberg, the famous fantasy author who created the epic ”Elves” series which, as you all know, inspired all modern fantasy (the wedding shop girl is, incidentally, a huge fan). The main features are the desk and the fireplace, which includes a light brick. The desk has another of those super neat transparent parts for the ink stand, and an epic typewriter that I borrowed from this fantastic design. The first plan for the top floor was to have an attic packed with curios, slightly inspired by the scenes in The Neverending Story. However, when I needed the space for the desk, I left the owl in there.

On this build, I’m most proud of two designs. I wanted some ornate supports for the balconies (even though they are properly attached to the floor and don’t actually connect) and the angled form of the classic metal detector proved perfect. It has a weird size – it’s exactly one brick minus the vertical height of a plate wide. While LDD frowns on connecting studs to Technic holes, it works well in reality. Lego sent me the newer design of the detector which lacks the antistud on the bottom, which actually worked better than my prototype using classic space parts. Then there’s the round window. I was experimenting with SNOT:ed double arches and seeing which round parts would fit between them, then looking up good prints. While it’s a little oversized, the new TIE front window was too spot on to pass up. I got it to fit within two eight-wide arches with a ring of curved sections outside. The entire thing hinges on Technic bricks. I’m also rather proud of the neck clip parts that fill in the space underneath and add a slightly smoother slope to the grey, while the top section is actually sliiiiiiightly off the official standards but fits well within the tolerances.

Overall, this monster of a building is 46 cm at the crest and my biggest since I knocked down Town Hall, but it preserves the general proportions of the original much better than the Dojo. It was interesting to build in regular old red, since I generally dislike the saturated classic colours. I was a bit wary of the colour scheme being too similar to Fire Brigade, but the lighter red and dark tan breaks it up, I think. Also, gotta love that expensive, sweet sand red.