My internet history began around Christmas in 1995. My mother worked at an education center that had access to the world wide web, and occasionally brought me there in the evenings. This was far away from the streaming social media thing the internet is today. Google wasn’t a thing. I’m not even sure Altavista was much of a thing. ”Surfing” was literally finding out one URL and then checking their link page. This was the time of blank grey backgrounds, of index.html:s, of ”under construction” gifs and of webrings. Sometimes the webpage wasn’t even HTTP, but just a FTP directory where you could download stuff to your heart’s content. I brought floppies to that place and downloaded everything I could find. ... Läs hela texten

Street Fighter VI is finally, after a string of excellent promotion, attracting controversy over a rather dull cover featuring rather dull protagonist Luke. And while we don’t know if it’s final (the first logo shown wasn’t), it would be a shame if such a promising game was let down by terrible box art. Because Capcom has been employing amazing artists like Akiman, Bengus, Shinkiro and Kinu Nishimura, so every piece of cover art in the history of Street Fighter has been amazing. Wait, it hasn’t? Let’s have a look. ... Läs hela texten

After another successful Kickstarter campaign and a long wait, it’s finally here. The subtitle of Christopher Tin’s fourth major album is An Extinction Elegy, and that becomes very obvious when listening to this album. The previous ones have had different themes, but have generally celebrated humanity in different ways. Even To Shiver The Sky, which described the way flight was used for warfare, ended on a positive note with Russian and American texts talking about the wonders and possibilities of space. ... Läs hela texten

It has been two years since I finished my 1:1 sculpture of my character Shaana. Since then I’ve moved, and having set up a brand new Lego building area I wanted to make something big again. And the choice was fairly obvious. Niereth is a much newer design of mine, having been created in 2018, but she quickly became a favourite.

After having already learned roughly how to make a sculpture of this size, the build took shape quickly. I made a 1:1 sketch to figure out how large she would need to be to scale with Shaana, who is 181 cm tall while Niereth is 175 cm. This time around I had the super useful Technic frames and liftarms with holes on all sides, which made the internal skeleton much easier to construct. So I very quickly had the general concept up and running, and could get started on the face. This time the head is separate and sits securely on the neck but can be removed. With all the frames it was much simpler to mount the outer layers, so I can remove most of them very easily which turned out to be helpful. ... Läs hela texten

Golden Axe, in its Amiga version, was probably one of the first games where I got to play as a distinctly female character. Sure, there was Metroid, but there really is no comparison between the NES game and the huge, detailed Frazetta-esque sprites of the arcade game and its 16 bit ports. I probably played as Gilius at first, but soon discovered that Tyris was devastating with her screen-filling dragon magic. That she was running around in a tiny white bikini wasn’t a factor just yet.

So even though I’ve rarely played any of the Golden Axe games in a good thirty years, Tyris Flare is rather special as a game character, and I jumped on the preorder of this brand new figure from Storm Collectibles. The company makes a ton of game figures, but I haven’t had the opportunity to get any until now. She did end up being delayed for month after month, not to mention that she came packed with a blue dragon which bumped up the price even more, plus of course shipping and import fees. So while I’m not absolutely certain whether she was worth the cost and wait, let’s take a look. ... Läs hela texten

Before One was announced, Sarah Àlainn performed in a live show with three other artists, which was released on CD with the somewhat cumbersome title Shionogi Music Fair – La Diva TV Live. Sarah was joined by Ryoko Moriyama, Seiko Niizuma and Ayaka Hirahara, neither of whom I had encountered before. Moriyama is a folk singer who has released some classics in her long career. Niizuma is mostly a musical artist, having performed in Miss Saigon and Les Miserables. Hirahara is a pop singer who performed the ending theme of Okami and has recorded a version of ”Inochi no Namae” from Spirited Away. ... Läs hela texten

It has already been five years since Lego released its Assembly Square, the ten-year anniversary set of the modular line, and consequently the Boutique Hotel is the 15th anniversary celebration. It’s been a weird run, not even counting the events of the last two years. After experimenting with 50’s Americana in two sets, they returned to a fairly timeless early 20th century style, but both the Book Shop and Police Station were still non-traditional, with the former being more of side street building instead of something fitting on the main street, and the latter quite lacking in personality. ... Läs hela texten

One of the more common criticisms of Dark Souls 2 is that the world isn’t as tightly designed as in Dark Souls, which is partly by design and partly because of lack of time. It’s well known at this point that Dark Souls 2 was rushed and had a ton of content reworked very late in the process. The Gutter was supposed to be an entire city of broken buildings stacked together, and connect to a sewer system leading into Drangleic Castle, for example.

So when you get to Earthen Peak, you climb the tower and finally reach Mytha, and if you’ve had enough foresight to burn the windmill, which stops the mechanisms that pump poison up the tower, you will beat her rather easily. Then you progress a bit further, take an elevator up … and enter a castle sunken into lava. ... Läs hela texten

After famously crashing and burning with Lair on Playstation 3 and having a bunch of promising games cancelled, Factor 5 is finally back, or at least sort of. They’re releasing a set of ports of their classic Turrican games, but in a complicated way. Two physical limited editions are collecting all five main games (Turrican, Turrican 2, Turrican 3/Mega Turrican, Super Turrican and Super Turrican 2) plus variations, but the downloadable Turrican Flashback collection only features the first four. Even though I’m a big fan, I was a bit annoyed by this setup, but eventually bought it to show my support if nothing else. While I dislike the ”release old game to see if there’s any interest” thing, I do want a new Turrican. But hey, why not do a Kickstarter like everyone else? ... Läs hela texten 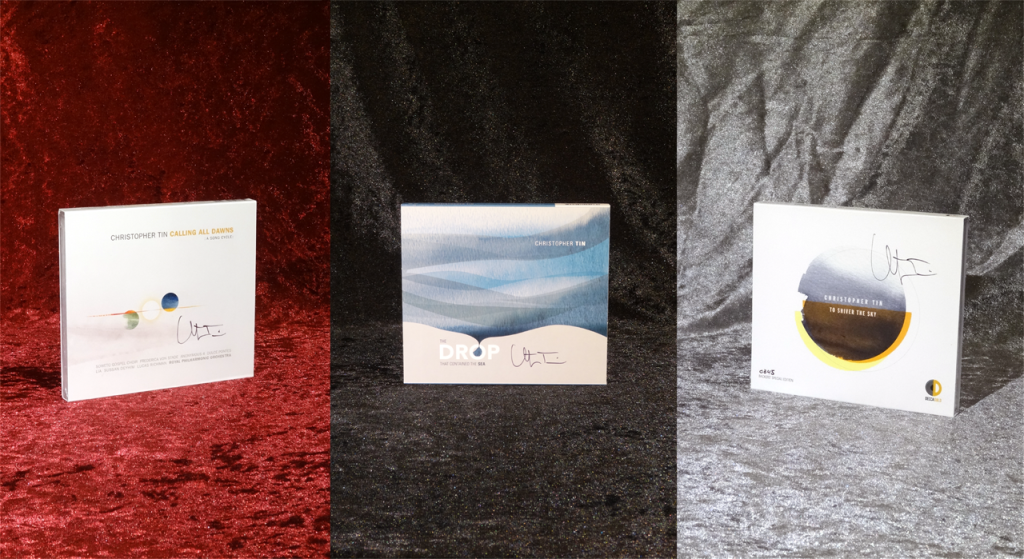 As part of the Kickstarter campaign for To Shiver The Sky, Christopher Tin made a set of all three albums available. And since I only had the first two downloaded and because they are some of my favourite albums ever, I obviously jumped at the chance to get a signed set. And it is finally here.

I’ve written about To Shiver The Sky and the first two previously (in Swedish) and there isn’t much to add. All three contain some amazing music by a great composer, and while I still prefer the more varied tone of Calling All Dawns and The Drop That Contained The Sea, the last album is constantly growing on me and is even more refined technically.

It’s worth listening through the entire albums, and many of the tracks form a complete movement so that it’s hard to separate them. But here, in order of appearance, are my six favourite parts. Because it would be too hard to pick just one from one of them.

* I’ve listened to so many versions of ”Baba Yetu” over the years that it’s hard to pick a favourite, but that’s also the appeal. It doesn’t matter if it’s the original version from Civilization IV, or the album version performed by the Soweto Gospel Choir, or versions by Alex Boyé or Peter Hollens, or Angel City Chorale’s full concert performance, or the Stellenbosch University Choir, or the performance Tin conducted himself at Llangollen. It’s always filled with joy and constantly reinvents itself.

* The final four tracks of Calling All Dawns form an amazing suite across four languages and cultures. This is Tin at his most unique and pleasant, inviting people to explore new horizons. The most glorious part is ”Hamsafar”, sung beautifully in Farsi, but all of it is great. The interleaving of the very masculine, traditional Maori dances and the bright, uplifting choir parts of ”Kia Hora Te Marino” makes for a very rewarding combination.

* The Drop That Contains The Sea has a similar structure as the previous album but saves its singular masterpiece ”Iza Ngomso” for a bit. It’s a constant barrage of beautiful voices and some delightful flourishes in the middle bridge, like the little flute that sends chills down my spine.

* ”Waloyo Yamoni” finishes off the album in style, with a single 12 minute track that introduces several different themes before combining them all in a powerful conclusion. It’s like a short story in itself, and once the initial theme returns at the 9 minute mark it’s all fantastic from there.

* The opening 18 seconds of To Shiver The Sky are perfect: promising greatness and delivering over the next couple of minutes. Not only is ”Sogno di Volare” possibly the single strongest theme of Tin’s creations and the separate opening track magnificent, it’s used to great effect to cap off ”The Fall” and the poignant end of ”Oh, the Humanity”. The sky is shivering and so am I.

* The brief but powerful ”The Power of the Spirit” flows seamlessly into the epic ”We Choose to go to the Moon” at the end of To Shiver The Sky, and after the bleak, war themed section that reflected the early 20th century, these tracks create a hopeful story for the future. Despite the fact that the text of both songs originated during the Cold War, it’s worth remembering and celebrating that there is indeed a crew of American and Russian fulfilling Kennedy’s words in the International Space Station at this very moment. The final two minutes crescendo into a fittingly epic end for this trilogy of albums … for now.

You may recognize that these fantastic parts form large sections of these three albums. Yes. That’s my point.