I guess it was inevitable. I’ve been creating new versions of Shaana in practically every medium since I first came up with her in 1995. She’s been in tons of games, I’ve made big and small plastic models, a Ral Partha miniature and a 1:6 scale doll. And when I returned to Lego, she was one of the first custom minifigs I created. I’ve even made a Friends minidoll out of her. So when the new, smaller balljoints were introduced with the Mixels theme in 2014, I started thinking about building my own, large scale Shaana, inspired by all the cool, posable mechs that Lego create. 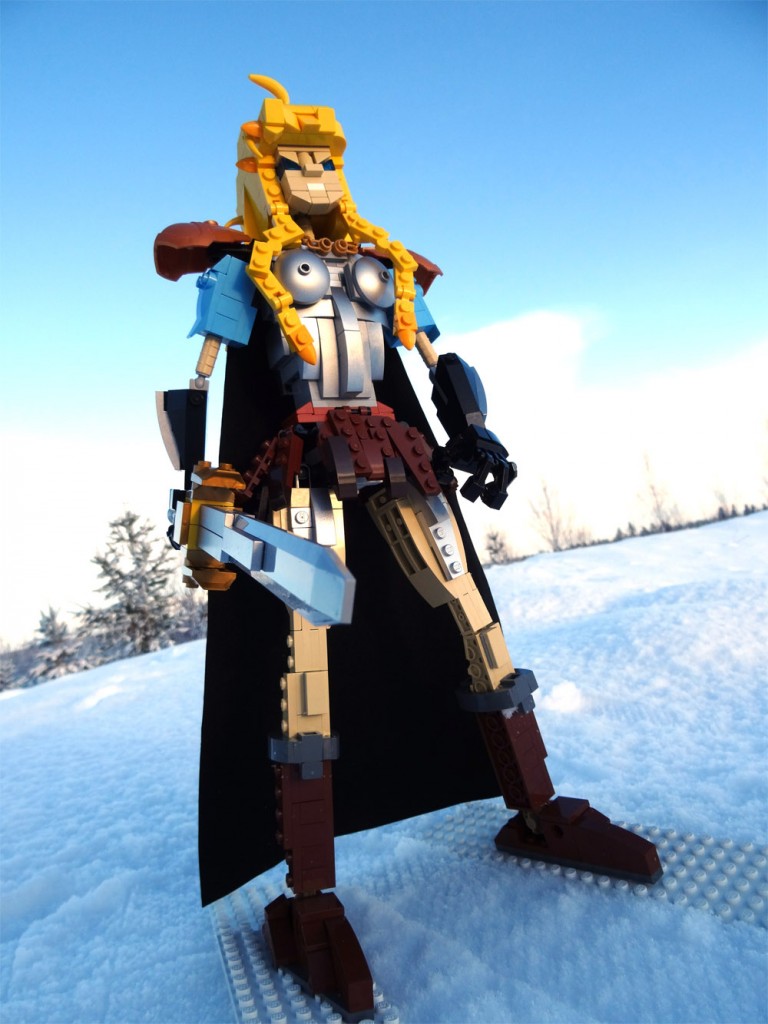 Admittedly, Shaana was designed around her chestplate. While not particularly realistic or comfortable, it was one of the original design ideas, and I needed domes in silver. After finding those, I built the torso and then started looking for suitable silver pieces to cover it. I didn’t want to make any custom spray painted parts, but metallic silver is a very uncommon Lego colour. Luckily, I came across the Agents theme from 2008, which used tons of silver pieces, many of them curved slopes. I ordered a bunch of loose parts and an actual set with came with plenty of them.

For the head, I started with the face. I wanted to use transparent cheese slopes for her eyes, and this proved tricky. The face is actually built in two directions at once. Eventually, I managed to fit all this together in a sturdy way. I then added her hair, which flows down her back assisted by plenty of hinge plates. The front is rather fragile, but I wanted to approximate her braids.

The shoulders were originally orange wedges, but when shopping around I came across actual shoulder plates from one of Lego’s previous maxifig themes, Knights Kingdom II. I experimented with a shield and shinguards in addition to these, but eventually settled down with just the bronze pauldrons. Moving down the arm, Shaana wears a blue dress under the armor, so the sleeves can be seen. I had planned to make a lower section covering one of her legs, but it turned out to be tricky to fit it. Before adjusting her proportions I wanted to use 1×3 plates and found out that they were incredibly rare in medium blue – luckily I don’t need them anymore. The lower arm is fairly straight-forward, with hands inspired by the Samurai Mech. These are able to hold her sword firmly in one or two hands.

Her hips went through some design phases, trying to make a sturdy center. After some attempts I ended up with a 2×4 section pretty much all down through her waist, which makes her tough enough for posing. The waistcloth hinges in sections to allow her legs to move better. I can also note that I was originally going to settle for dark grey cheese slopes on her waist and just get her finished before Christmas… and then I found that the exact colour I wanted was being released in the 2015 lineup. So I actually bought two Star Wars sets just for those four pieces. Umm, yeah.

The legs have been greatly improved and lengthened to fit her heroic proportions, but the skinny original knee remains. Again, some silver helped define her armour. The boots proved interesting. At first I was using a standard ball joint for the ankles, but they were much too weak to hold her weight (don’t tell her I mentioned her weight though!). I brought in ratchet joints, but the pin was the low-friction version. With a rod added inside her shins, enough friction was generated to make her stable.

There isn’t much in terms of accessories, although I could certainly come up with a few. Her original Dragon’s Toothpick two-handed sword was essential, of course. The blade is a helicopter rotor which tends to see reuse like this, but since it doesn’t come in silver I tried to spice it up with 1×6 tiles pulled from the Agents set. Finally, her cloak is made from standard cloth, and clasped to her armor with gold chains.

While I realize that most of the world doesn’t share my fascination for this character, I’m very, very happy with how this turned out. As with any Lego project, I kept adding new parts and replacing old ones, so I don’t really want to speculate on how much she cost to make. It was worth it, though. And now I guess it’s only a matter of time before I start making an entire lineup of these…