Finally, it’s completed. The biggest of the modular buildings so far and my biggest set in terms of parts count (although Orthanc and Imperial Flagship dwarf it in stature). Town Hall was the first of the modulars to not be designed by Jamie Berard, if you’re not counting Market Street. Instead the honour went to Astrid Graabæk, who usually designs Friends sets. And I’m not happy to say that it shows. While Town Hall is a striking building, mostly due to its size, it’s very lacking in exciting builds and clever details. Even most Friends sets, with their cheaper prices and simpler layouts, often have more interesting solutions. I don’t know who designed Heartlake Shopping Mall but even at half the price and less than half the parts count, it has many more neat flourishes. 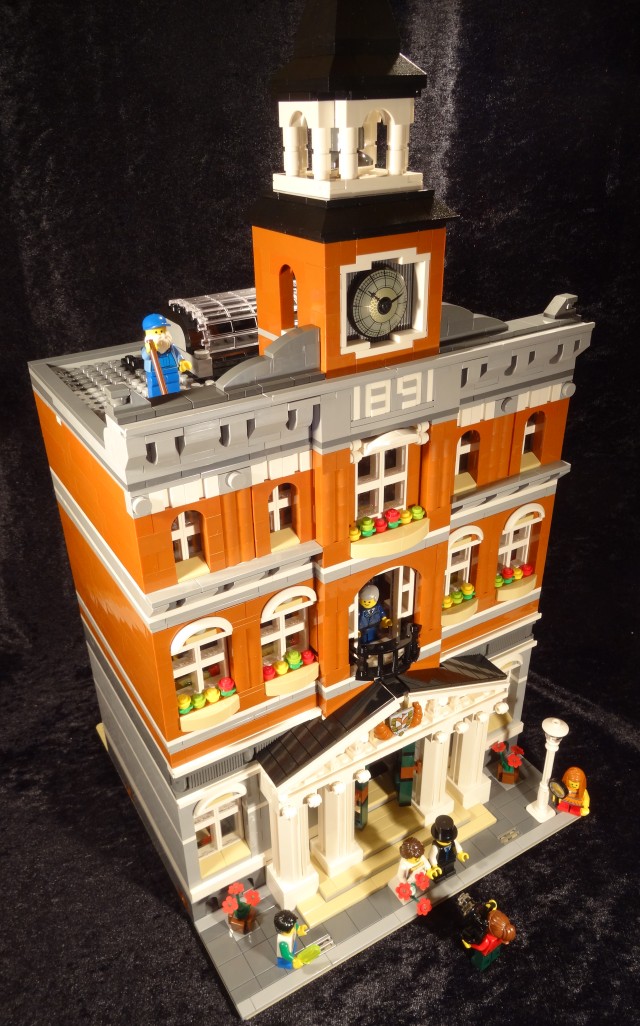 As a thematical centerpiece to the modular street, the Town Hall certainly looks the part. It’s a strict, almost severe building, complete with a faux-classical pillared entrance. But aside from that, there’s very little going on. There are eleven main windows and a small balcony. There’s the same number on the back, along with a back door and an unsightly gap in the wall to allow for the manual elevator action crossing between floors. Inside there is a little office (apparently to pay taxes), waiting areas (which are as exciting as they sound) and the elevator to reach the second and third floors, housing the mayor’s office and a meeting room, respectively. There is obviously some detail here and some nice colours used including some dark green, but apart from the special cabinet pieces there’s little to excite. The main feature of the inside area is the auditorium, where a single minifig can address any who would listen. The upper floors have a balcony railing to look down into the auditorium which is cool in theory, although since the building is already rather cramped, it’s more of a shaft for suicides if the meetings upstairs take a shocking turn. I’m also not a fan of how the bottom floor has a huge chunk taken out of the inner walls. It’s obviously to make it possible to reach into the lower rooms even with high walls, but it leaves an ugly gap. 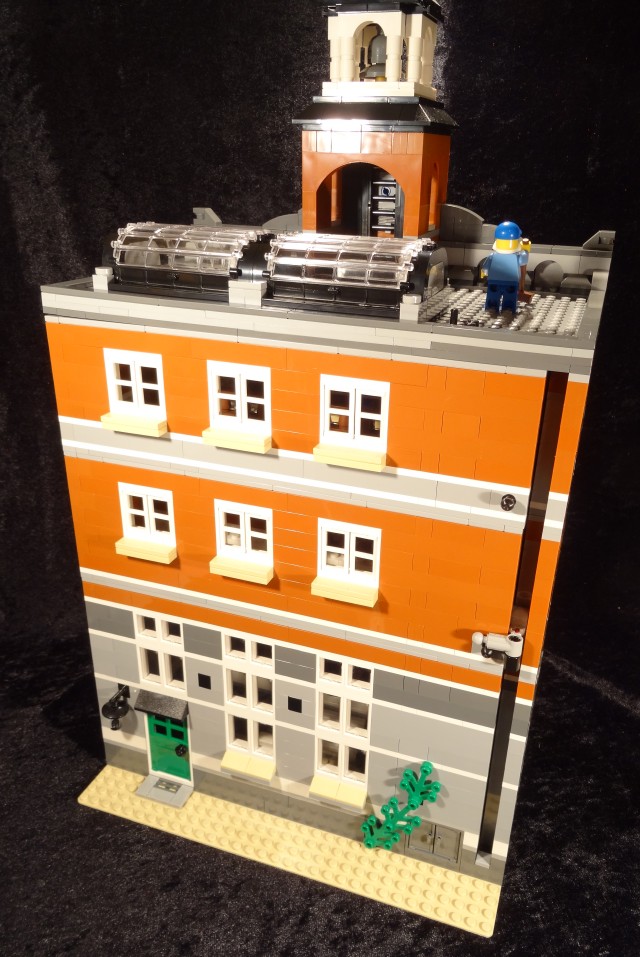 During the build itself, there was very little to make it exciting. The pillars outside are clever, I supposed, but other than that it’s layer upon layer of stacked walls, and the 66 (count them!) window panes get annoying to find and place. There are tons of bags for the first booklet and there is an annoying tendency to mix parts of the same type across multiple bags. Normally you get all of one kind in one pile after opening everything. It’s just not a very pleasant build. 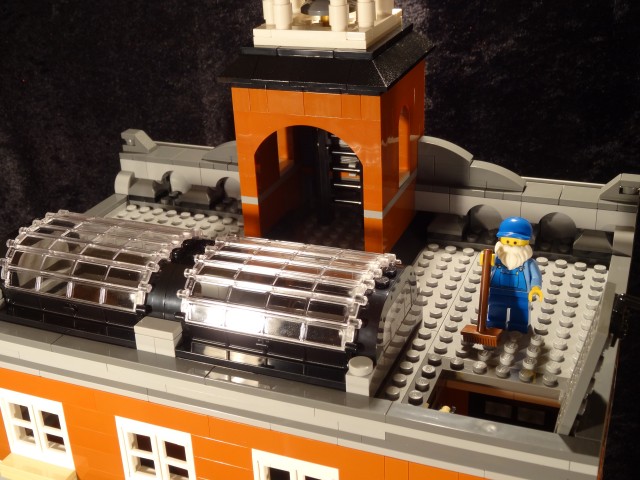 Until you get up to the roof, the second part of the third booklet. It’s said that Jamie assisted with the roof, although I’m not sure if he did it all or just specific details. Either way, suddenly there are smart solutions worthy of a Lego modular building. One detail is very hard to even discover: the curved slopes underneath the crest of the building. They are placed upside town in holders, which are then placed THROUGH small castle windows to put the slope on the outside. After the boring main structure, this almost comes as a shock. Then there’s the roof windows, which are created out of garage doors, which are draped across curved pieces and held in place by the very corner of round tiles. It’s rock solid and an example of the same sub-Lego-unit precision Jamie showed with the corner facade of Café Corner. And then finally there’s the clock tower, with another Fire Brigade/Pet Shop style of tiled text and the outlines on the clock which somehow fit perfectly inside very ordinary Lego dimensions.

The roof makes for a very happy end to this otherwise unremarkable build, and even if you’re not going to buy this set it’s worth checking out the instructions to learn new stuff. But aside from that… I’m not really happy with it. It’s oversized and won’t fit in my shelves. I could take off the entire clock and just barely squeeze it in, but that would kind of defeat the purpose of it. I might look around for another display solution, but in either case Town Hall won’t stay around for long. 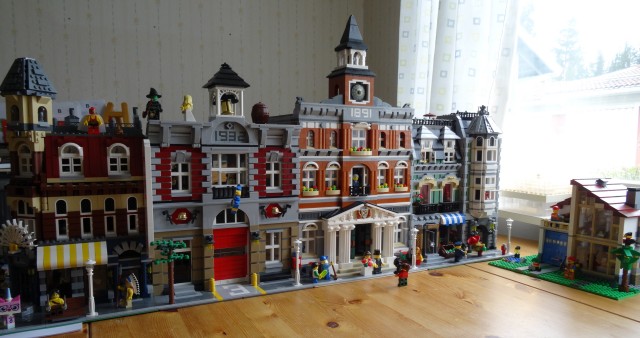 With 2766 pieces, many of them in very useful colours, Town Hall is a great parts pack. The idea is to break it down very soon and start building a custom modular of my own. With the pieces already included and a bunch of new stuff I’m going to add, it should be possible to build something really special. For others with more room, the Town Hall is obviously a good set along with the other modulars, but it should be low on your priorities. It will probably stick around for a bit longer as Grand Emporium is the next to go out of print, but I wouldn’t bet on seeing it around longer than Pet Shop, which is the better set in every respect.